What Have We Done Canada! A Huge Mess We Are In Now With Communist China And Our Once Proud "Canadian Owned Airline"--Thanks Trudeau! 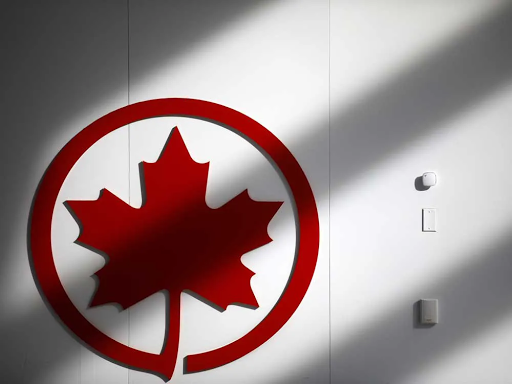 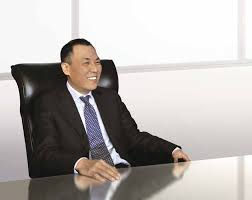 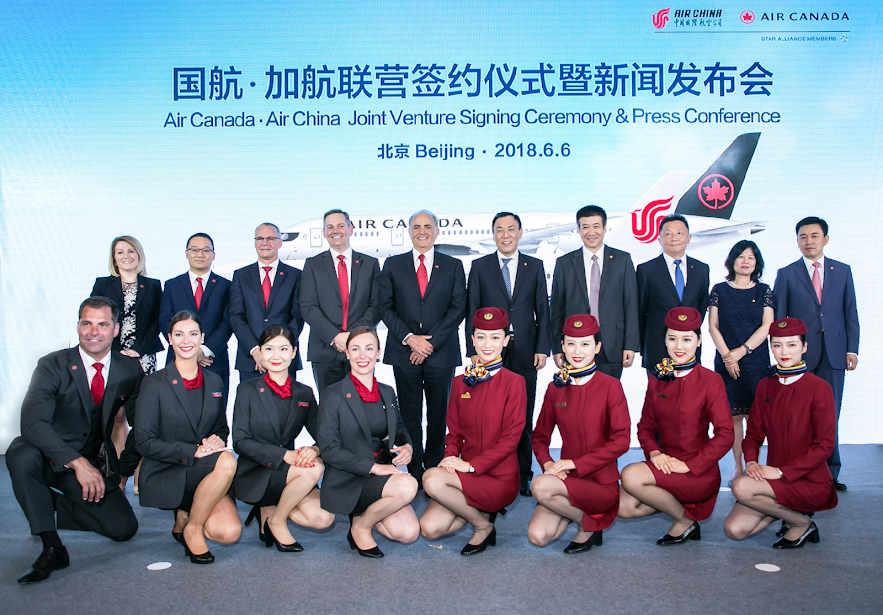 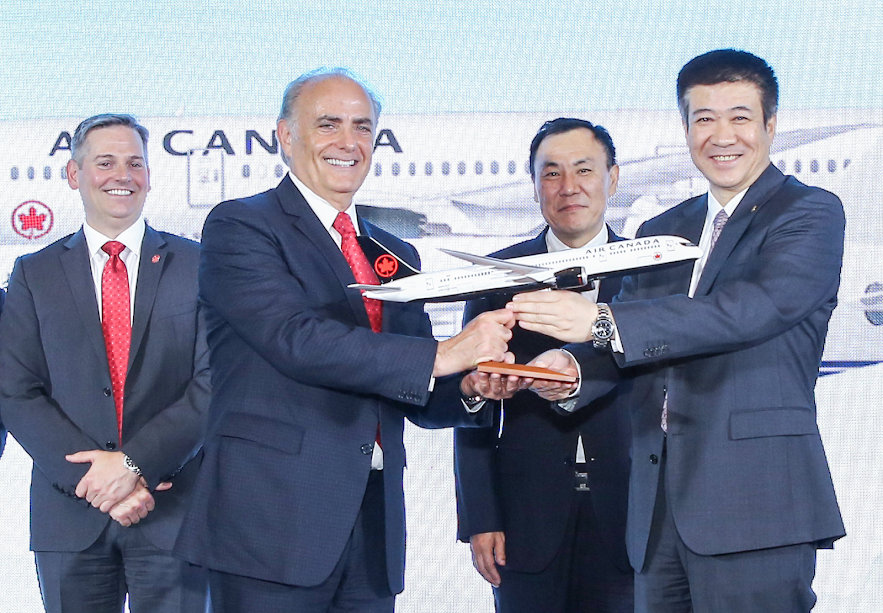 BEIJING and MONTREAL, June 6, 2018 /CNW Telbec/ - Today at a ceremony in Beijing attended by Jianjiang Cai, Chairman of Air China; Zhiyong Song, President of Air China; and Calin Rovinescu, President & Chief Executive Officer of Air Canada, Air China and Air Canada signed the first joint venture agreement between a Chinese and North American airline, deepening the two carriers' longstanding partnership. The joint venture enables the two countries' flag carriers and Star Alliance members to expand their existing codeshare relationship and deepen it by increasing commercial cooperation on flights between Canada and China and on key connecting domestic flights in both countries to provide customers travelling between the two countries with greater and sustainable benefits including an unparalleled range of flights, products and services. 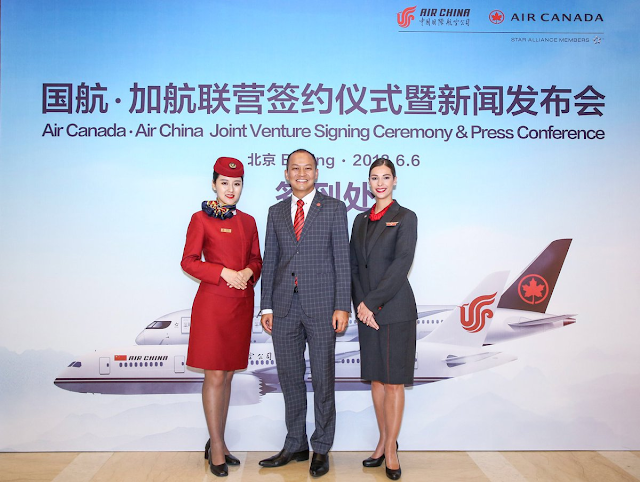 "The Sino-Canada market is one of the important long-haul markets to Air China, which has been developed rapidly in recent years with an increase of 17.8% in 2017. Air China and Air Canada as Star Alliance members have the foundation of a profound cooperation and under a Joint Venture framework will offer a wider range of products and quality services, and provide more flexible flight choices, favourable fare products and seamless travel experiences for customers. Moreover, both parties will take the China-Canada Year of Tourism as an opportunity to support the tourism, trade and culture exchanges for both countries," said Jianjiang Cai, Chairman of Air China Limited.

"Our joint venture agreement with Air China, the highly respected flag carrier of the People's Republic of China, is an important strategy in our global expansion as it significantly increases Air Canada's presence in an aviation market set to become the world's largest by 2022.  Air Canada is honoured to formalize this strategic partnership with Air China during the Canada-China Year of Tourism to offer customers travelling between our two countries an unparalleled network and expansive options for travel ease.  Having served China for more than 30 years, and as demonstrated by Air Canada's average annual capacity growth of 12.5% over five years and the $2 billion of aircraft assets currently committed on routes between Canada and China, China is an integral part of our global network," stated Calin Rovinescu, Air Canada's President & Chief Executive Officer.

As the joint venture is phased in over the course of the next six months, customers will be able to enjoy exceptional travel options through , It will also enable us to bring flexible flight choices, favorable fare products and seamless travel experiences, optimized flight schedules, harmonized fare products, joint sales including corporate and marketing programs, aligned frequent flyer privileges, reciprocal lounge access and an overall enhanced travel experience.

The carriers' recently expanded code-share, effective May 5, 2018, increases the number of Canada-China connecting flight opportunities for customers by 564 each day.  In December 2017, Air China and Air Canada implemented an expanded reciprocal lounge agreement for customers and introduced the airlines' first joint frequent flyer promotion for their respective PhoenixMiles and Aeroplan members.

In the last two years, Air China has launched flights directly linking Beijing with Montreal, and Air Canada has launched new non-stop flights between Montreal and Shanghai to meet growth in demand. The two carriers now operate up to a total of 52 trans-Pacific flights per week between Canada and China from Toronto, Vancouver and Montreal to and from Beijing and Shanghai.

Air Canada is Canada's largest domestic and international airline serving more than 200 airports on six continents.  Canada's flag carrier is among the 20 largest airlines in the world and in 2017 served more than 48 million customers.  Air Canada provides scheduled passenger service directly to 64 airports in Canada, 60 in the United States and 98 in Europe, the Middle East, Africa, Asia, Australia, the Caribbean, Mexico, Central America and South America. Air Canada is a founding member of Star Alliance, the world's most comprehensive air transportation network serving 1,300 airports in 191 countries.  Air Canada is the only international network carrier in North America to receive a Four-Star ranking according to independent U.K. research firm Skytrax, which also named Air Canada the 2017 Best Airline in North America.  For more information, please visit: aircanada.com/media, follow @AirCanada on Twitter and join Air Canada on Facebook.

This news release includes forward-looking statements within the meaning of applicable securities laws. Forward-looking statements, by their nature, are based on assumptions and are subject to important risks and uncertainties. Forward-looking statements cannot be relied upon due to, amongst other things, changing external events and general uncertainties of the business. Actual results may differ materially from results indicated in forward-looking statements due to a number of factors, including without limitation, industry, market, credit, economic and geopolitical conditions, energy prices, currency exchange, competition, our dependence on technology, cybersecurity risks, our ability to pay our indebtedness and secure financing, our ability to successfully implement appropriate strategic initiatives or reduce operating costs, war, terrorist acts, epidemic diseases, high levels of fixed costs, liquidity, our dependence on key suppliers, casualty losses, employee and labour relations and costs, our ability to preserve and grow our brand, pension issues, environmental factors (including weather systems and other natural phenomena and factors arising from man-made sources), limitations due to restrictive covenants, insurance issues and costs, our dependence on Star Alliance, interruptions of service, changes in laws, regulatory developments or proceedings, pending and future litigation and actions by third parties and our ability to attract and retain required personnel, as well as the factors identified in Air Canada's public disclosure file available at www.sedar.com.  The forward-looking statements contained or incorporated by reference in this news release represent Air Canada's expectations as of the date of this news release (or as of the date they are otherwise stated to be made) and are subject to change after such date. However, Air Canada disclaims any intention or obligation to update or revise any forward-looking statements whether because of new information, future events or otherwise, except as required under applicable securities regulations.