Ottawa is investigating controversial foreign worker permits that will allow as many as 201 Chinese miners to work a proposed project in northern British Columbia, a government spokeswoman confirmed Tuesday.

http://www.theglobeandmail.com/news/british-columbia/ottawa-joins-bc-in-probing-coal-miners-foreign-worker-permits/article4773274/
Posted by Conan Doyle at 11:28 AM No comments:

Posted by Conan Doyle at 9:52 AM No comments:

Critics are sounding off about a deal between China and Canada. (CP)

OTTAWA - The federal government has rejected demands for public hearings on its investment protection agreement with China, leaving the controversial deal even supporters say is far from perfect on a fast track to ratification.
Opposition critics say the haste to ratify a deal that took 18 years to negotiate in just 21 sitting days — and without hearings — leaves Canada vulnerable to costly surprises down the road.
"The Conservative government measures success by how fast they can sign agreements, they are putting speed ahead of quality," said NDP trade critic Don Davies, whose request to hold public hearings on the Foreign Investment and Protection Agreement (FIPA) to the Commons trade committee was rejected by government members this week.
"We all agree that close economic relations with China is a desirable thing, but not at the expense of a bad deal."
Instead, MPs on the committee will be given a briefing — for one hour — by department officials on Thursday. No independent witnesses will be called.
A spokesman for Ed Fast said the trade minister was not available for an interview, but noted MPs can always debate the treaty in days allotted to the opposition in the Commons.
Rudy Husny of Fast's office defended the deal as "very similar to other treaties signed by Canada with other countries" and something Canadian firms have long sought.

The agreement, whose details were first revealed on Sept. 26, has faced opposition from civil society groups such as the Council of Canadians, but also from non-aligned voices.
Critics have directed their fire at some unusual aspects of the FIPA, including an effective 31-year lifespan — by comparison NAFTA can be cancelled on six months' notice — and failure by Canadian negotiators to received "national treatment" for prospective new investments into China. Existing Canadian investors are guaranteed treatment no worse than domestic Chinese firms under the deal.
The agreement is not wholly reciprocal, say critics, because among other aspects China can place conditions on local preferences, including suppliers and employment, on Canadian investors, while Canada — because of NAFTA obligations — is barred from doing so.
The biggest problem, says Gus Van Harten, an expert on international investment law at Osgoode Hall Law School, is the predominantly one-way direction of expected future investments, meaning Canada will be assuming most of the risks.
"All the other FIPAs Canada has signed is with countries that don't invest in Canada," he explains. "In this treaty, it's fair to conclude that Chinese investment in Canada is very likely to outstrip significantly Canadian investment in China."
The proposed $15-billion acquisition of Calgary-based energy company Nexen Inc. (TSX:NXY) by a Chinese state oil firm is triple the current total investments by Canadian firms in the communist country, and Nexen is "just the edge of the wave" of what is coming, he said.
Van Harten notes that Canada has already been forced to pay about $160 million in compensation to foreign firms for government policies considered to have broken trade rules under NAFTA. The risks are even greater with a FIPA deal with China, a country he says has already shown itself to be litigious.
"You can support FIPAs to support Canadian investors, but this puts us in the sitting duck position because only investors can sue the government, governments cannot sue the investors," he points out.
"This is exactly what China wants if their aim is to acquire major ownership of Canada's resources ... and move them out and be processed in China."
Even some supporters such as Gordon Houlden, a former Canadian diplomat with 22 years in China, agrees the China FIPA is unusual because of its long lifespan and the fact it doesn't give national treatment to new investments. That is not expected to be problematic for Chinese firms looking at Canada, but may not be the case when Canadian firms want a piece of the action in China.
Still, Houlden, who is currently director of the China Institute at the University of Alberta, believes the critics are exaggerating the risks.
China is now one of most desired locations in the world for foreign firms, so its unlikely Canadian investors would be stymied. As well, the deal establishes that disputes will go to international arbitration, taking them out of the hands of notoriously unpredictable Chinese courts.
"I'd say grab it and run with it. If I was investing in a rural province, I'd want a FIPA for protection," he said.
Trade lawyer Lawrence Herman of Cassels Brock judged the deal "not up to the gold standard" but reasonable overall.
"It helps put the business investment relationship into a treaty framework with a set of rules, which helps Canadian investors," he said.
All interesting points, says Davies, and issues that should be studied by the trade committee.
"There are extraordinary and unusual aspects of this FIPA that are raising alarm bells and we think require further examination," he said.
According to the timetable, the deal will be ratified on Nov. 1. 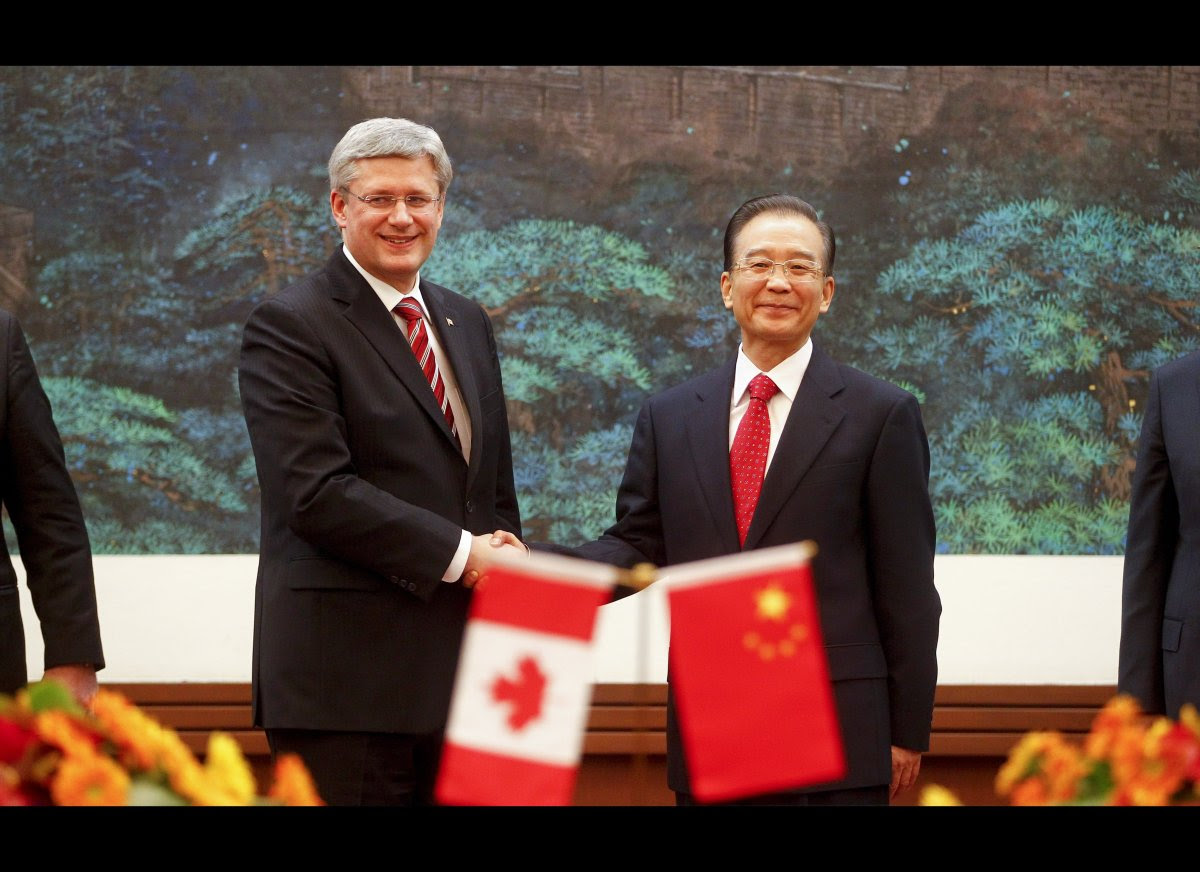 Posted by Conan Doyle at 9:12 AM No comments:

Magna International       Magna International's political connections
Sylvia Ostry, C.C.
Distinguished Research Fellow
Centre for International Studies
University of Toronto
Canada
Moeen Qureshi
Chairman
Emerging Markets Partnership
United States of America
Schmidt, Helmut
Former Chancellor of Germany
Publisher, Die Zeit
Germany
The Honorable Paul A. Volcker
Former Chairman
Federal Reserve Board
United States of America
Volcker's business ties raise questions
NEW YORK - Paul Volcker man tapped by the United Nations to lead a probe into the troubled Oil-for-Food program, has potentially too-close-for-comfort ties to companies he's supposed to be investigating.  (Fox)  PREVIOUS:  Next crisis at UN may involve ties of Volcker, Strong    Questions for Paul Volcker   UN didn't ask Volcker to disclose finances    The Volcker Oil-for-Food Commission: Is it credible?
Wei Ming Yi
Chairman of the International Advisory Council
CITIC Group
People’s Republic of China
The CITIC Group is the state owned conglomerate that oversees the Chinese government's international investments.  It was founded by Li Ka Shing and Henry Fok.   Li Ka-shing one of the world's richest men, is the owner of Hutchison Whampoa Limited and has been involved in such business activities as the Panama Canal, Suez Canal, and various other business deals of a global nature.  The relationship between his communications companies like Hutchison Telecommunications and their part in Internet censorship in China is at this time a question.   CITIC Pacific is part of this CITIC group and Paul Desmarais is a board member and is reported to have 4% of the shares.  CITIC is one of the 5 companies along with Minmetals that bid for Noranda.  The parent company of Noranda is Brascan, owned by the Bronfmans.  Charles R. Bronfman (see listing above) is also part of this advisory council. The chairman of Noranda is Trevor Eyton, Conservative Senator, appointed by Brian Mulroney (see listing above).

Wei Ming Yi also sits on the International Advisory Board of MMC: Marsh & McLennan Companies, Inc  along with John R. Evans, the Chairman of Torstar Corporation who own the Toronto Star among other newspapers and media and part of Sing Tao Daily the pro communists Chinese newspaper.  John R. Evans is also the chair of Canada Foundation for Innovation (CFI).
Posted by Conan Doyle at 5:33 PM No comments: