Canadian lawmakers voted to support a motion formally recognizing China’s treatment of its ethnic Muslim Uighur population as a genocide on Monday.

The Conservative motion passed overwhelmingly in the House of Commons with 266 votes to zero. The Liberal cabinet abstained from voting.

An amendment to the motion, proposed by Bloc Quebecois MP Alexis Brunelle-Duceppe, calling on the International Olympic Committee to move the 2022 Olympic Games out of China if the genocide continues also passed 229 to 29 votes.

The Liberal cabinet’s abstention came on the heels of an already-strained relationship between Canada and China, intensified by the December 2018 arrest of Huawei CFO Meng Wanzhou at the behest of the U.S. government and the arbitrary detentions of Canadians Michael Spavor and Michael Kovrig in what has been widely viewed as retaliation.

China’s treatment of Uighurs in its Xinjiang province has been widely condemned by the international community.  However, Prime Minister Justin Trudeau has so far stopped short of calling the treatment of the Uighurs a genocide, calling the term a “loaded word” that should be used carefully.

“A genocide determination on the side of the Canadian government would obviously spark a significant diplomatic clash between China and Canada simply because genocide is the worst crime a somebody can commit to an ethnic group,” Dr. Adrian Zenz, a researcher and expert on China’s minorities, told Global News.

Andrew McDougall, an assistant political science professor with the University of Toronto, said public support for the motion could cause trouble for the federal government, which has been negotiating for the release of Spavor and Kovrig since 2018.

“It shows us a little bit of hesitancy on the part of Trudeau to go that next step, especially since we’ve already seen some proactive actions by the Chinese ambassador to try to get ahead of this and sort of decry that motion going ahead as being a violation of its internal sovereignty,” he said.

China’s ambassador to Canada, Cong Peiwu, denounced the motion on Saturday in an interview with the Canadian Press, dismissing the allegations of genocide as unfounded China bashing. 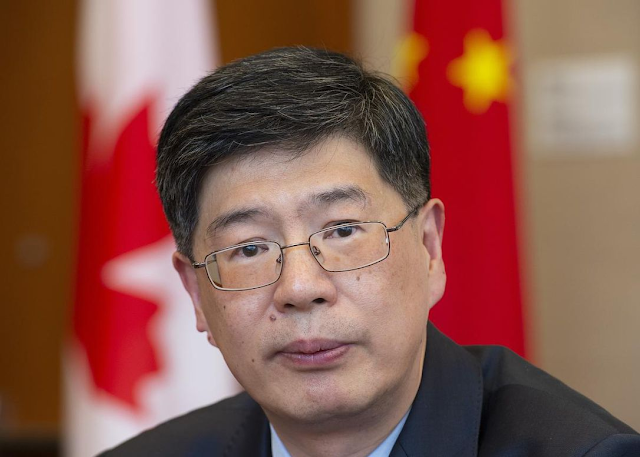 “We firmly oppose that because it runs counter to the facts. And it’s like, you know, interfering in our domestic affairs,” Cong said. “There’s nothing like genocide happening in Xinjiang at all.”

Earlier on Monday, Conservatives urged Liberals to vote in favour of their party’s motion to recognize China’s treatment of its ethnic Muslim Uighurs as genocide.

Ahead of the vote on Monday, Conservative MPs Michael Chong and Garnett Genuis were joined by Uighur community members at a virtual teleconference in calling for the federal government’s support of the motion, saying unanimity would send a strong signal to China.

“We can no longer ignore this,” said Chong, the party’s shadow foreign affairs minister.

“We must call it for what it is: a genocide.”

Kalbinur Tursun, a woman who had survived a Uighur camp in Urumchi, China, called on the federal government to recognize what she described as “genocide” perpetrated by the Chinese government.

Tursun recounted her own experience in the camps, first as a women’s prison guard in 2017 until 2019, when she said she was forcibly sterilized.

During her time at in Urumchi, Tursun said Uighurs were treated as sub-human. She alleged the guards were “torturing, beating them, insulting them, making them crawl like dogs and not hesitating killing too,” adding that the guards wanted Uighurs “to die as soon as possible.”

“As any other Uighur women I was forcibly sterilized after waiting in line for 4 hours my turn. At the time I was 50 years old,” she said.

“After this surgery I have became permanently handicapped, I would not forget this painful experience for ever. Several hundred Uighur women became sterile at the same time with me. As I speak now, I am feeling the post-surgical pain in my body.”

China has denied any forced sterilizations are happening in its Xinjiang province, and dismissed all allegations of forced labour, re-education camps and cultural genocide in a statement on Monday.

“The Chinese government protects the freedom of religious belief of all Chinese citizens, including ethnic minority groups like the Uyghur community in Xinjiang,” the statement read.

“We are firmly opposed to interference in China’s internal affairs by any country or individual under the pretext of human rights, and to the hyping-up of the so-called “investigation” in Xinjiang by someone who is already convinced that we are guilty.”

But Chong has rejected those claims, pointed to mounting evidence — including satellite images, videos and personal accounts from escaped Uighurs — documenting the atrocities.

“The evidence has come in the form of high-definition, high-resolution satellite imagery that has been tracked over time that documents clearly the building of hundreds of detention centres,” he said.

Genius echoed Chong’s statements, adding that “what we see before our eyes is not complicated. We see the existence of modern concentration camps.”

“We believe the message will be that much stronger and clearer if as many members of the government as possible join with us and show that we are able to stand together on issues of fundamental human rights,” he said.