Suspected Child Predator Gets Face Full of Asphalt Instead

In Norman, Oklahoma, Cleveland County Sheriff’s deputies pressed the face of a sexual predator against the hot asphalt as they snapped handcuffs on him.

The 28-year-old thought he was meeting a 14-year-old girl for a sexual act.The dramatic scene unfolded on Wednesday when, after sending explicit pictures to Deputy Elizabeth Bridges who was posing as a 14-year-old girl, a man identified as Richie Thao attempted to meet with the “girl.” A police report obtained by The Western Journal identified Thao and the circumstances leading to his arrest.

Expecting to meet a 14-year-old girl, Thao was actually met by police who had pictures of him and his vehicle and were waiting for him.

“Prior in the conversation Richie sent a photograph of the front of his vehicle showing the crack in his windshield and a selfie of him in a grey t-shirt with some type of black, cursive lettering above what appeared to be a pocket,” the police report stated.

Are you concerned about online child predators?

Thao made contact with the police who were posing under the name “Lexi” through “a known website used for casual sexual encounters.”

“We identified before he got here what kind of vehicle he was driving and who he was,” Lt. John Szymanski told KOKH-TV

“As soon as he arrived, we already had charges on him, and he was under arrest for use of the electronic telecommunication devices. The first comment that he made was that he didn’t send any pictures.” 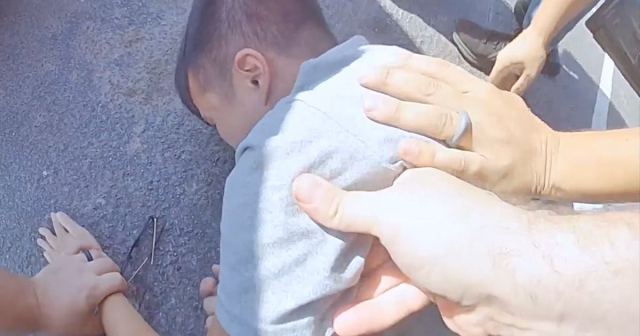 “Unfortunately for him, he did send some explicit pictures.”

Szymanski told reporters that Thao had agreed to meet up with the “14-year-old girl” Deputy Bridges was impersonating in order to perform a “specific sex act he requested.” Although he did not identify Thao or Bridges at that time, their names were gathered from the police report.

According to the Police report, “Richie was taken into custody for the charges of Lewd Acts with a Minor Child Under the age of Sixteen (21 OS 1123) and soliciting sexual conduct or communication with minor by use of technology (21 OS 1040.13a) and Obscene material or child pornography — solicitation of minors (21 OS 21-1021).

“Richie was then booked into the Cleveland County Detention Center.”

Bridges and two detectives then interviewed Thao at the Cleveland County Detention Center. She went on to explain in her report that after being read his Miranda Rights, the 28-year-old agreed to speak with the police.

“Richie admitted to sending the sexually explicit messages to whom he believed to be a 14-year-old minor child along with a photograph of male genitalia.

“Richie further stated that the photograph was one he found online and not his penis but admitted that doing so was wrong.”

Szymanski told KOKH-TV, “We need to keep an eye on what our children are doing, what devices they’re using, their phones, their tablets, their computers,” he said. “It could be done on any of them.”

Szymanski continued, explaining that his deputies will always be on the lookout to prevent these types of crimes.