Former top judge to be prosecuted for corruption

Former top judge to be prosecuted

The mainland will prosecute a former senior judge from its highest court on suspicion of corruption after accusing him of crimes including illegally accepting public funds, Beijing's anti-graft watchdog said on Tuesday.

Xi Xiaoming, the former vice president of the Supreme People's Court, came under investigation in July for "serious violations of discipline and laws", the terminology China usually uses for corruption.

He is one of the most senior judicial officials to be ousted by President Xi Jinping's anti-corruption campaign since the downfall of Zhou Yongkang, the former domestic security chief whose brief included law enforcement and courts.

Xi Xiaoming had been a member of the ruling Chinese Communist Party for 40 years but has been accused of abusing his position to help his relatives obtain benefits for their business activities, the party's Central Commission for Discipline Inspection said in statements on its website.

Other charges include illegally accepting public funds, breaching confidentiality rules, and leaking secrets related to judicial work. His case has been transferred to legal authorities, the watchdog said, meaning that he will face prosecution. He has also been expelled from the party.
Posted by Conan Doyle at 11:24 AM No comments: Links to this post

US sends graft suspect back to China

BEIJING • The United States has repatriated one of China's most-wanted economic fugitives, the ruling Communist Party's anti-graft watchdog said, signalling that Washington is cooperating with Beijing in China's corruption crackdown.
The repatriation of Yang Jinjun marked the first time that China has succeeded in getting a person back from the United States since Beijing published a list of 100 wanted economic fugitives in April, the Central Commission for Discipline Inspection (CCDI) said on its website yesterday.
Pictures showed Mr Yang on the tarmac at an unidentified Chinese airport, flanked by uniformed Chinese police officers.
SINO-US COOPERATION

The forced repatriation of Yang Jinjun is an important development in the China-US anti-corruption and law enforcement cooperation and has laid an important foundation for cooperation between both sides in this field.
THE CENTRAL COMMISSION FOR DISCIPLINE INSPECTION said on its website yesterday

The list of economic fugitives is part of "Sky Net", an initiative the Chinese government unveiled last month to better coordinate its fight against suspected corrupt officials who have fled overseas and to recover their "dirty" assets.
Chinese officials have long complained that China's anti-corruption fight has been hampered by a reluctance by Western countries to sign extradition treaties.
But the legal basis for the latest repatriation was unclear. China does not have extradition treaties with the United States or Canada - the two most popular destinations for suspected economic criminals.
Such countries have baulked at signing extradition deals with China, partly out of concern about the integrity of its judicial system and treatment of prisoners. Rights groups say the Chinese authorities use torture and that the death penalty is common in corruption cases.
However, the CCDI said in a statement on its website that Sino-US law enforcement and judicial departments had "joined hands in the fight against cross-border corruption offences".
"The forced repatriation of Yang Jinjun is an important development in the China-US anti-corruption and law enforcement cooperation and has laid an important foundation for cooperation between both sides in this field," the CCDI said.
The announcement comes days before Chinese President Xi Jinping starts his first state visit to the United States.
Mr Xi launched a sweeping campaign against graft after assuming power in late 2012, but has been hampered to an extent by difficulty in getting corrupt officials and assets back from overseas.
Mr Yang, who fled to the United States in 2001, was the general manager of a company called Minghe Group in the eastern city of Wenzhou, the CCDI said. He is wanted on suspicion of corruption and bribery and had been subject to an Interpol "red notice".
State media said he was an official from the Chinese city of Wenzhou and linked him to Yang Xiuzhu, a former Wenzhou mayor accused of embezzling more than US$40 million (S$56 million).
Officials say only about a dozen people on the "Sky Net" list have been returned to China so far, mostly from countries with close ties to Beijing.
Posted by Conan Doyle at 11:18 AM No comments: Links to this post

On the possibility of the Beijing Maple Leafs Hockey Club On the possibility of the Beijing Maple Leafs Hockey Club

By GrinWithGuilt  @GrinWithGuilt on Jun 22, 2015
The IOC will be voting for the host city of the 2022 Winter Olympic Games on July 31st in Kuala Lumpur. A strong contender is Beijing, which previously hosted the 2008 Summer Olympics.
A Beijing win may have a significant impact on the Maple Leafs. And it has everything to do with China’s quiet growth as a hockey nation.
The emergence of China as an economic power in the last few decades is well documented. Bloomberg has estimated that by 2030, China’s GDP will reach 22.2 trillion dollars. (Note: for years, we have been warned that the Chinese are coming). Such figures as these, combined with the growing affluence of the Chinese middle class, make it extremely unwise for the IOC or any sporting body to overlook the influence and potential of this giant market.
Over the last few years, MLSE started a strong push to export their brand into the region. They envision that the Maple Leafs can transform from a national to a global brand. The dream outcome for MLSE executives would be to parallel the success of the Yankees or Man Utd. (two teams with ubiquitous brand recognition).
MLSE’s plans are notably ambitious. Among the numerous challenges, one stands out as rather obvious: are the Chinese ready to embrace "Canada’s game?" More importantly, who are these masochistic Chinese fans that want to cheer for the Leafs? Regardless of these uncertainties, our sporting overlords remain undeterred and appear poised to take over the world.
Phase one of the Leafs expansion into China is well underway. In November of 2014, Rick Westhead of TSN wrote an article on the Maple Leafs developmental strategy in China. Westhead reported that MLSE had already "established relationships with companies interested in sponsorship agreements with the Raptors." The fruitfulness of these partnerships encouraged them to further explore ways to promote the hockey team overseas.
In 2014, 87 NHL games were broadcast in China as part of a three-year deal with the league. (I have read figures that state the number of Leafs games aired ranged from 12 to 20, but I can’t confirm). In the Stanley Cup Finals, an average of 800,000- 1,000,000 viewers watched the Blackhawks beat the Lightning. These ratings would be the envy of many NHL teams. Upon sensing an opportunity to accommodate Chinese viewers and sponsors that would wish to capitalize on advertising revenue, MLSE began placing Mandarin ads on the ACC’s boards for a few regular seasons games this past season.
Clearly, the financial incentives of growing the game in China are immense. Basketball and the NBA have forged a dominant presence (Yao Ming looms as a political, cultural and actual giant) and therefore have immensely profited. Hockey, however, is still a great unknown, barely registering even as a niche sport. The enormity of the task cannot be overstated, when taking into consideration that the IIHF lists only 308 U-20 players in a country with over a billion people. Meanwhile, basketball has 300 million registered players across the country and shows no sign of slowing down.
The numbers do not seem to discourage Chinese officials, who foresee a future where Chinese national teams can compete with the likes of Canada and the United States in the Olympics.
In the political arena, the Canadian government is seizing the opportunity of "hockey as diplomacy." An interview with Stephen Harper aired on CCTV during a Leafs broadcast, while on his trip to China (accompanying him were various MLSE representatives). In a separate interview, President Xi Jinping claimed that hockey was his favourite winter sport. The urgency to grow the game of hockey is occurring at the state level.
This new partnership between the two nations and MLSE became evident when the Chinese women’s national team arrived for a three-month training stint. In an interview with the Toronto Star, Dan Noble (the Canadian training coach of China’s women’s team), commented that a primary goal was to establish a "long-term partnership." During the women's visit, which began in November, the ladies competed against junior teams and universities in Southern Ontario. They were also invited to Ricoh Coliseumto watch a Marlies game.
Far away from Toronto and MLSE facilities, the Leafs sent a group of representatives to Shanghai for their second hockey development camp in February. Greg Schell, who is the Leafs Coordinator of Hockey Development, explained that the camp is structured so that the children work on things such as skating drills, puck control, and a "modified" version of the draft combine.


Included in that party, was a member of the Leafs alumni, Peter Ing. Ing, who is of Chinese descent through his father’s side, is working as both team ambassador and instructor. In an interview with China’s CCTV-5, Ing was asked to describe his experience so far.

Beyond grassroots development, the team is also considering holding future training camp and exhibition games in China. They are by no means alone in trying to shape this emerging hockey landscape. Teams such as the Vancouver Canucks and New York Islanders have already invested in their own programs. TSN recently reported that theKHL is interested in putting an expansion team prior to the year 2022. All of these moves signal that China is a market that is ripe for the game of hockey. One advantage the Leafs may have is that their efforts have given them a sizeable lead over other NHL franchises. They are quietly bringing Canada's game and Canada's favourite team to an entirely new generation of hockey fans.
Posted by Conan Doyle at 9:08 AM No comments: Links to this post


Posted by Conan Doyle at 9:02 AM No comments: Links to this post


Posted by Conan Doyle at 9:00 AM No comments: Links to this post

How graft suspect Michael Ching allied himself with Canada's Liberal leader, with the help of ex-minister Raymond Chan 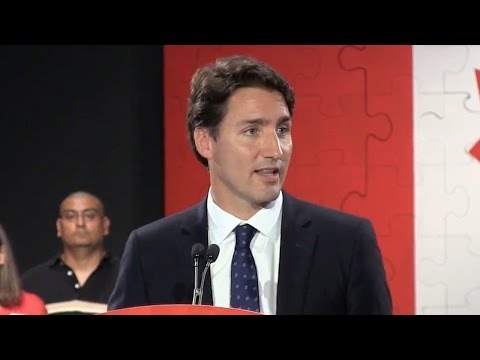 An investigation by the South China Morning Post has revealed how Chinese corruption suspect Michael Ching Mo Yeung manoeuvred himself and his daughter into the orbit of would-be Canadian prime minister Justin Trudeau, using a pro-Trudeau political group that was headquartered in Ching’s office. Ching’s attempts to insert himself at the heart of Canadian federal politics were facilitated by his friend, former cabinet minister Raymond Chan, Liberal Party sources said. This was also supported by documents and numerous photographs obtained by the Post.

One picture shows Ching, a Liberal member, lining up to vote at the party’s British Columbia convention in 2013, surrounded by members of the pro-Trudeau youth group dressed in red vests emblazoned with declarations of support for the party leader. Ching is also seen relaxing with Chan and his wife on the convention sidelines.
Posted by Conan Doyle at 8:42 AM No comments: Links to this post

[–]Tsslltng_Glocknspls 1 point 11 hours ago
Posted by Conan Doyle at 8:36 AM No comments: Links to this post

An aggressively pro-China policy can only hurt Canada's national interests. So who's pulling the strings in Ottawa's scheme to build up the next Communist superpower?