Yong Zhao said the same harmful effect on Chinese students may be happening in British Columbia. 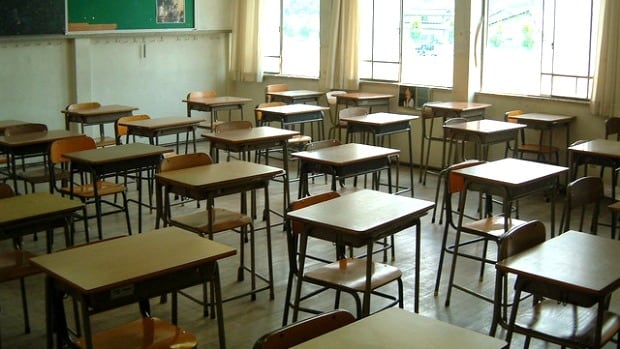 Schoolchildren in China drilling their tongues to pronounce English words correctly often find themselves picking up more ZZZs than ABCs.
Half a year can be spent practising rote verbal exercises, a mind-numbing method that can kill youngsters' enthusiasm for learning, said a former English teacher from China who's seen it firsthand.
Such a teaching style has evolved to meet institutions' needs for generating high scores in standardized testing, but Yong Zhao said the same harmful effect on Chinese students may be happening in British Columbia.
Zhao is now a top international education consultant based in Oregon who was invited by B.C.'s Education Ministry to spell out his vision for upgrading the provincial school system.
"My extreme advice, we should do away with all of (standardized testing)," Zhao said in an interview after addressing the forum that convened more than 150 educators and interested business and community leaders.

'The basics should come after we have a passion'- Yong Zhoa

"It's a waste of money, very little value, destroys parents, destroys schools too, and puts students and teachers in a bind for high-stakes testing."
The province should revolutionize the system by shifting the teaching emphasis to nurture every child's individual passion and talents. The concept is called personalized learning, and gives both students and teachers more space to explore their diverse abilities.
"To be creative, to be entrepreneurial, you cannot skip the basics," Zhou told the room.
"But the basics should come after we have a passion. Sometimes we do the basics and we have killed people's interest."
His call for innovation comes at the same time B.C. teachers are administering the standardized Foundation Skills Assessment tests to children in Grades 4 and 7, and as the province's education minister announced a new education strategy.

Minister Peter Fassbender told the forum the government is partnering with educators to identify several schools throughout the province to pilot programs that swap the focus to individualized learning. 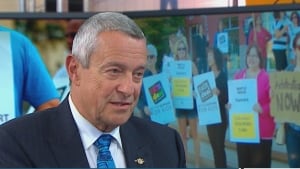 Education Minister Peter Fassbender says pilot projects for individualized learning programs are being set up in B.C. (CBC)
"We're not going to throw the baby out with the bath water," Fassbender said. "And as Dr. Zhou said, there are great ideas but if we try to go from here to here we're going to scare half the population."
The minister said development of the "K-12 Innovation Strategy" will be ongoing but avoids a top-down approach and instead encourages students to explore what's relevant to their own lives.
A working group will be formed to connect school districts, participating schools and interested organizations such as the B.C. Teachers' Federation and associations representing superintendents, principals and independent schools.
The ministry also released an updated B.C. Education Plan, which better articulates the concept of personalized learning and proposes to further examine a suite of student assessment tools.

Forum participants sat at desks situated in concentric circles while peppering each other and several keynote speakers with questions.
Zhao, now a professor at the University of Oregon who studies global educational policy, told the crowd that the world's established education systems drive creativity down and discriminate against students with diverse abilities.
He said children already have a tremendous capacity to soak up foundational skills -- so long as the learning methods are engaging.

B.C. Teachers' Federation president Jim Iker said Yong Zhoa's comment were a "breath of fresh air." (CBC)
He suggested teachers should provide less explicit instructions and instead give students broader ownership over their learning, placing more emphasis on developing individually-meaningful skills while making better use of global resources.
Teachers' federation President Jim Iker welcomed Zhou's vision as a "breath of fresh air."
The union has long argued general, cognitive-skills tests don't help students learn or teachers teach.
"Workplaces want young adults who are able to be creative, who are confident, who are self-reliant, who've got social skills," he said. "That's an important piece that's not part of a standardized test."
Grade 11 student Marnie Klassen from Abbotsford, B.C., said she's interested in the concept of personalized learning, but believes the current, test-based system already suits her needs.
Posted by Conan Doyle at 12:30 PM No comments: Links to this post

President Obama and Xi Jinping
While the nation is waiting pensively for the Obama administration’s traitorous amnesty executive orders they have slipped through dangerous changes to the visa policy for Chinese nationals. Specifically, these changes are:

“On Monday in Beijing, President Obama announced an agreement with China that builds on that progress by extending the validity of tourist and business visas to 10 years and student visas to five years — both for Chinese citizens traveling to the United States and for Americans traveling to China.
Prior to this agreement, Chinese citizens had to renew their American business, tourist, and student visas annually and the same applied to American travelers visiting China.”
White House explains why its visa reforms are a big deal for the U.S. economy, By Penny Pritzker and Jeffrey Zients, @CNNMoney, November 10, 2014

Well, I suppose this is one way to limit the problem with Chinese visa overstayers as they can go back and forth for five or ten years without much constraint, besides the time limits for each discrete stay depending on the visa type. Of course, they could just fly back to China and promptly return to comply with the regulations. But this will never occur. [New visa policy elevates U.S.-China relations,By Jeremy Diamond, CNN, November 10, 2014]
The mind boggles when one contemplates how much more in the way of espionage, anchor babies, diploma mills, sham marriages,illegal labor, and general illicit activities will be generated by this new wave of Chinese visitors (colonizers?).
Just in case there was a concern about the proper vetting of ournew neighbors rest assured that our government is thoroughly reviewing the applicants:

“Thanks to reforms in visa processing, average waiting periods for visas in important markets like Brazil and China have dropped from as high as several months to less than five days, all while maintaining the same rigor in legal and security reviews.”

The potential impact of 1.3 billion Chinese finding expedited, long term access to the United States could be staggering. These changes to the visa policy take place on November 12, 2014.
Posted by Conan Doyle at 10:06 AM No comments: Links to this post 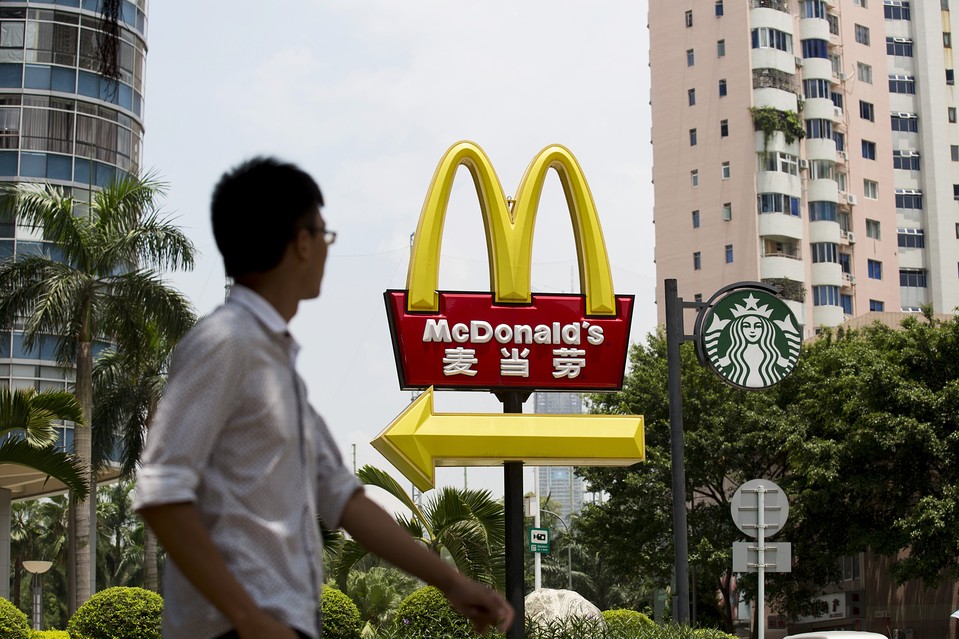 ENLARGE
McDonald's and Starbucks signs in Shenzhen, China, in August 2014. China became the world’s top destination for foreign investment last year. PHOTO: BLOOMBERG NEWS
China’s elevation is part of a longer-term trend in foreign investment away from developed and toward developing economies, which last year attracted 56% of all overseas investments by businesses, up from 52% in 2013 and double their share before the financial crisis of 2008.
The change comes after years in which the country has been gaining ground as an FDI destination, as its economy has expanded to become the world’s second largest.
“China has been steady with modest growth over the past few years, and it is expected to continue,” said James Zhan, director for investment and enterprise at Unctad. “There have been structural changes in inflows to China, from manufacturing toward services, and from labor-intensive to tech-intensive.”
But China might not have displaced the U.S. in 2014 were it not for Verizon’s purchase of $130 billion worth of shares in a joint venture from Vodafone of the U.K. The transaction counted as a reduction in foreign investment in the U.S. And with its economy set to grow more rapidly than most other developed economies, the U.S. once again could become the leading destination.
The U.S. was the only developed economy among the top five recipients of foreign investment.
Overall, overseas investments by businesses fell 8% from 2013 to $1.26 trillion, the lowest level since 2009, when the global economy was in recession following the onset of the financial crisis.
The continued weakness in foreign investment underscores the long-lasting nature of the economic damage caused by the financial crisis, as well as rising geopolitical tensions. Foreign investment in Russia collapsed in 2014 following the country’s March annexation of Ukraine’s Crimea region.
“Companies are still not yet in the mood and mode for expansion,” said Mr. Zhan.
Unctad said it doesn’t expect a significant recovery in foreign investment this year.
“The fragility of the world economy, with growth tempered by hesitant consumer demand, volatility in currency markets and geopolitical instability will act as a deterrent for investors,” Unctad said. “The decline in commodity prices will also lower investments in the oil and gas and other commodity industries.”
The U.S. wasn't alone among developed economies in suffering a decline in foreign investment during 2014. With the eurozone economy trapped in a long slump, businesses cut their investments in Germany by $2.1 billion and their investments in France by $6.9 billion. As the U.K. returned to rapid economic growth, foreign investment rose to $61 billion, making it the largest European destination for foreign investment. 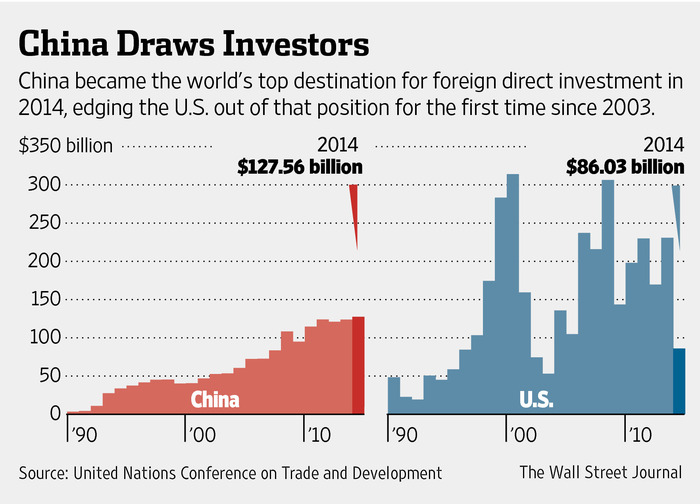