Students in China and South Korea who took the SAT on Oct. 11 will have their test scores delayed

All students living in China and South Korea who took the SAT on Oct. 11 will have their test scores delayed and reviewed because of allegations of widespread cheating, officials from the College Board and its global test administration and security provider, Educational Testing Service (ETS), tell TIME. 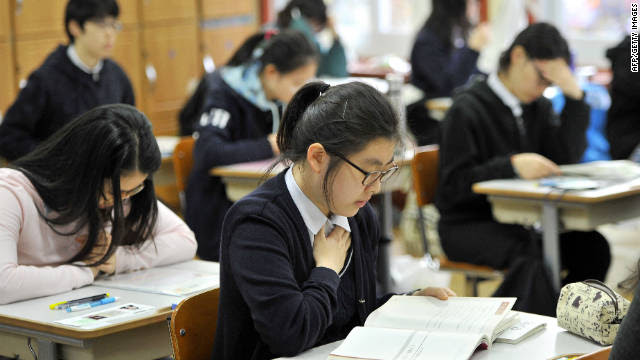 File photo: South Korean students prepare to take a standardized college entrance exam in Seoul on November 10, 2011.
STORY HIGHLIGHTS
Hong Kong (CNN) -- Thousands of Chinese and South Korean students applying for colleges and universities in the United States face an anxious wait amid claims of widespread cheating during recent SAT tests -- the measure used in the admissions process.
Their scores have been delayed pending an inquiry, despite the deadline for college applications fast approaching.
"Based on specific, reliable information, we have placed the scores of all students who are current residents of (South) Korea or China and sat for the October 11 international administration of the SAT on hold while we conduct an administrative review," Tom Ewing, spokesperson for test assessors the Educational Testing Service (ETS), said in a statement.
"(We) strongly denounce organizations that seek to illegally obtain test materials for their own profit," added Ewing.
In recent years, China in particular has experienced a surge in the number of students applying to U.S.-based colleges and universities. But fierce competition in China has led to a culture of cheating, according to Beijing-based educational consultant and teacher Jiang Xuequin.

2013: South Korea's SAT scandal
The SAT exam getting easier by 2016?
"Chinese people see education as a game to be beaten," he told CNN. "If you can beat it, you're a good player. If you can't beat it, then you're just stupid. Cheating is seen as a fair way to play the game.
"There's absolutely no sense of shame in cheating... it's been going on for years."
Electronic cheating
Just days ago, 2,440 Chinese students taking a national exam were caught using high-tech cheating gear, from wireless earpieces to "electronic erasers."
But the problem isn't unique to China. South Korea, another country with large numbers of students studying in the United States, has been hit cheating as well, with unscrupulous tactics often blamed on intense cramming schools called "Hakwons."
Last May, College Board, which runs the SAT system, canceled an SAT testing date in South Korea after tutor companies were suspected to have illegally acquired SAT testing materials in advance and told their students what would be on the test.