"I'm just a sax player," the musician says about how he accidentally wandered into the Hong Kong protests.
MATT SCHIAVENZAOCT 23 2014 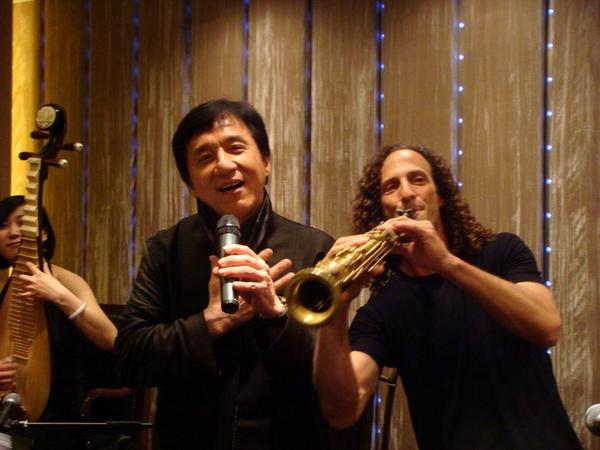 The pro-democracy protests in Hong Kong have entangled an unlikely celebrity: Kenny G. On a recent visit, the saxophonist tweeted a photograph (since deleted, screenshot here) of himself standing alongside several protesters and flashing the “victory” sign. In the body of the tweet, he wrote that he wished for a “peaceful and positive conclusion to the situation."
The Chinese government was not amused. Hua Chunying, spokeswoman for the country’s foreign ministry, issued a statement that said: “Kenny G’s musical works are widely popular in China, but China’s position on the illegal Occupy Central activities is clear.”

I spoke to Kenny G via telephone in Haikou, China, where he is scheduled to participate in a celebrity pro-am golf tournament this weekend.
Matt Schiavenza: Had you been following the events in Hong Kong? Or did you just happen on the protests while walking around?
Kenny G: Like everyone else, I’d been following the events on TV, and obviously I knew there were things going on in Hong Kong. I could see the crowds from my hotel room, and being naturally curious, I just wanted to see what was happening.
I do this a lot on tour. I’m not the sort of person who just stays in my hotel room and never leaves. Going out can be as simple as going to a restaurant, or going out for a run. I like talking to local people. If I get an afternoon off before a show in, say, New Jersey, then I’m going to go out and walk around.
Schiavenza: You’ve been famous in China, and Hong Kong, for a long time. How quickly were you recognized?
Kenny G: As soon as I left my hotel room people came right up to me. I probably took 40 to 50 pictures with people before I even got to the demonstration site. I’m very recognizable. You don’t have a big mop of long curly hair and not expect to be recognized. And now that everyone these days has a cell phone and a camera, they all want a picture.
My music’s been popular for 20, 25 years in China, and I’ve been coming here about once a year on tour. I’m flattered that my melodies have somehow resonated with the Chinese people. It’s an incredible feeling.
Schiavenza: What happened when you encountered the protesters?
Kenny G: I was there for all of five minutes. I was just curious and wanted to walk around. I had no idea which people were demonstrators, and which people were just there. It’s a busy, crowded city. I was just there taking pictures with fans, really, which is something I do, if not 100 percent of the time, then almost. I hung out for about five minutes and then went on my merry way.
Schiavenza: Did anyone draw you into a political conversation?
Kenny G: Oh no, not at all. The people I talked to just seemed like normal fans. “Oh, can I take a picture with you, I’ve listened to your music all my life," stuff like that. I have this song called “Going Home” that’s played everywhere in China when it’s time for people to leave someplace, so I’m not surprised people know my songs.
I read an article somewhere saying the Chinese government sent me down to Hong Kong to play “Going Home” so the protesters would leave. (Laughs). Sorry, I hate to disappoint people, but I’m not the new “foreign force” sent to interfere in Hong Kong’s affairs.
Schiavenza: A protester told the South China Morning Post that you told him, “As Americans we take democracy for granted … You guys hang in there. Hope you guys win in the end.”
Kenny G: No, I didn’t say that. Not at all.
Schiavenza: Were you surprised that people cared about your appearance at the protests?
Kenny G: I was surprised, yes. I don’t take myself that seriously. I enjoy walking around, seeing things, and then going on my way. I put out those tweetsin order to clarify things, to make sure my side of the story was told correctly.
Schiavenza: Speaking of Twitter, you deleted a tweet showing you standing next to protesters and flashing the “victory” sign. Why?
Kenny G: People were taking it the wrong way, so I felt like there was no advantage for me to leave it up there. To me, it was an innocent tweet. I was basically saying “here I am at the site.” I felt there was no point in leaving if it rubbed people the wrong way.
Schiavenza: Were you surprised that the government issued a statement about you? Had you had contact with the Chinese government before?
Kenny G: Yes, I was surprised because, again: I was just curious about what was happening, like anyone else would be. There were lots of people walking around taking pictures so I didn’t really think of much else.
I’m just a sax player. I just have a saxophone in my mouth, so there haven’t exactly been many opportunities to censor me.
Schiavenza: Jackie Chan, with whom you were photographed in China last month, has been critical of Hong Kong’s protesters. What do you think about that?
Kenny G: Jackie and I are friends, and I don’t know how he’s chosen to handle the situation.
Posted by Conan Doyle at 10:31 AM