Harper to stay in Ottawa for Remembrance Day

Harper to stay in Ottawa for Remembrance Day

By The Canadian Press — CP — Oct 27 2014
OTTAWA - Prime Minister Stephen Harper will be at the National War Memorial for Remembrance Day, not in China, as originally planned.
Harper spokesman Jason MacDonald says the prime minister will not attend the APEC leaders' meeting in Beijing on Nov. [Just think of the optics! Giving up more of Canada to the Chinese] 10-11. Instead, he'll be at Remembrance Day ceremonies in Ottawa. [showing his "sensitive side".] 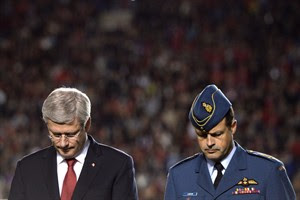 MacDonald says Harper's travel to Beijing is now up in the air, but couldn't say whether a possible prime ministerial visit to China was being scrubbed entirely.
"Details are still being worked out," he said when asked if another government official will attend the APEC meeting in the prime minister's place.
Harper was scheduled to travel to Australia for a G20 meeting following the APEC summit. A trip to New Zealand might also still be in the offing, although nothing's yet been confirmed between Canadian and New Zealand officials.
Remembrance Day has taken on a special significance this year in the aftermath of the two recent slayings of Canadian soldiers. Both killers had expressed jihadist sympathies, the RCMP says.
In Ottawa, Harper will join veterans and ordinary citizens as they gather at the war memorial, where Cpl. Nathan Cirillo was gunned down last week.
The memorial has since become a makeshift shrine to Cirillo, with bouquets of flowers piled high in tribute around the Tomb of the Unknown Soldier. Cirillo was a ceremonial guard at the tomb when he was shot.
Posted by Conan Doyle at 8:20 AM