US President Joe Biden holds a news conference following his meeting with Chinese president Xi Jinping, ahead of the G20 leaders' summit, in Bali, Indonesia, November 14, 2022.

President Joe Biden is confronting competing issues at home and abroad while he’s at the Group of 20 Summit in Bali this week, using the moment on the world’s stage to lean into international support for condemning Russia’s aggression while also facing the prospect of hearing Donald Trump announce his next run for the presidency.

Administration officials previewing Biden’s G20 summit activities had their sights set on the coalition’s efforts to voice its opposition against the war in Ukraine, which could send a powerful signal amongst a group that’s so far had fragmented approaches to the Kremlin’s aggression.

This marks the first time the group has gathered in-person since the start of the invasion, and most G20 members are expected to sign onto a statement condemning Russia’s war in Ukraine “and the human suffering it has caused both for Ukrainians and for families in the developing world that are facing food and fuel insecurity as a result,” a senior administration official said.

Such an expression of condemnation has been the work of months of diplomacy between G20 leaders. However, it’s not clear yet exactly which countries will sign onto the declaration.

Although the G20 is comprised of world powers who have long backed Ukraine during the war, it also includes other nations that have been tepid in their response to Russia’s aggression – including India, China, Saudi Arabia and Indonesia, the host of this year’s summit. The coalition, which is broadly focused on the global economy, also includes Russia itself. But Russian President Vladimir Putin is not making an appearance at the summit this year.

Since the spring, US officials have anticipated a showdown at this year’s G20 over the war. Biden has stated Russia should no longer be a member of the bloc, though expelling Moscow would require support from all of the G20’s members.

As of now, no official “family photo” is listed on a schedule, a sign of the deep acrimony within the G20 spurred by the war in Ukraine.

The president’s diplomatic Tuesday – a day working alongside leaders, including a meeting with Turkish President Recep Tayyip Erdogan – is expected to precede a 2024 presidential campaign announcement by Biden’s predecessor, Trump, from the other side of the world. The prospective announcement would set the stage for a two-year battle for the American presidency, having the power to cast a shadow over Biden’s efforts to unify world leaders – some already personally stung by Trump’s nationalist approach.

Biden and his team have already spent time during his multi-leg, cross-continental trip abroad addressing domestic politics, suggesting the issue has not only loomed on their minds, but also among their foreign counterparts in meetings throughout their travels.

Enter your email to sign up for CNN's "Meanwhile in China" Newsletter.
close dialog

On Sunday, US national security adviser Jake Sullivan told reporters that “many leaders” at the ASEAN Summit addressed the midterms with Biden, that many leaders were “following them closely” and that the president now feels he has a strong position on the international stage.

Vote counts for midterm races last Tuesday continue to trickle in, with Democrats only securing their continued majority in the US Senate this past weekend and the future of the US House of Representatives remaining up in the air. But Biden – who has frequently cast the US’ dynamic with other world powers as a global fight between democracy and autocracy – brought up the political headwinds working in his favor on Monday in Bali after he took part in a roughly three-hour meeting with Xi Jinping.

At a news conference after his meeting with Xi, Biden sought to cast the election results seen so far as a victory for the future of American democracy – a matter he had said was at stake at the polls.

“The American people proved once again that democracy is who we are. There was a strong rejection of election deniers at every level from those seeking to lead our states and those seeking to serve in Congress and also those seeking to oversee the elections,” Biden said at the start of his remarks after the Xi meeting.

The president also met with Prime Minister Giorgia Meloni of Italy. The meeting with Meloni was Biden’s first chance to confer with the new Italian prime minister in person since she took office in October – when she became the country’s most far-right leader since Benito Mussolini. 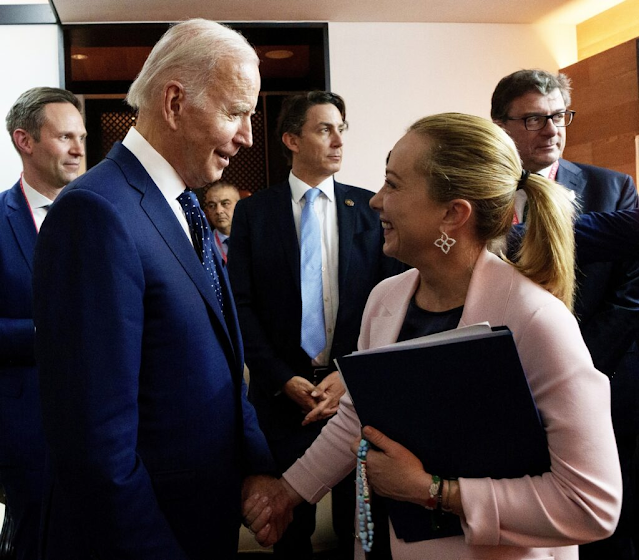 In a readout, the White House said the pair discussed a range of issues, but most notably the war in Ukraine.

“The two leaders also discussed their commitment to continue providing Ukraine the support it needs to defend itself and to holding Russia accountable for its aggression,” a US readout said.

On Tuesday, Biden participated in working sessions and a luncheon with leaders at the summit. He also co-hosted an event on the Partnership for Global Infrastructure and Investment, which the White House said “aims to mobilize $600 billion in the next five years with G7 partners to deliver sustainable infrastructure and advance U.S. national security and economic security interests.”

Biden spoke about a range of investments by the US and multilateral institutions around the world at the event, saying that “this is something that we have an obligation to do.”

Biden ticked through investments announced previously by a group formed by the Group of 7 nations, widely seen as a counter to China’s Belt and Road Initiative. “I want to emphasize the word ‘investments.’ Investments that are driven by local needs,” Biden said.

Biden then announced the Just Energy Transition Partnership with Indonesia (the White House has released a fact sheet), which seeks to mobilize $20 billion in public and private money “to support Indonesia’s efforts to reduce emissions” and transition away from fossil fuels to renewable energy.

The global infrastructure initiative event follows a launch in 2021 amongst G7 partners to better position the US and its allies to compete with China. China’s Belt and Road Initiative, first announced in 2013 under Xi, aims to build ports, roads and railways to create new trade corridors linking China to Africa and the rest of Eurasia. The Chinese-funded, cross-continental infrastructure initiative has been seen as an extension of the country’s sharp ascent to global power.

Other topics at the summit, the senior administration official said, include economic coordination, climate change, and the Covid-19 pandemic, with new announcements expected on digital infrastructure in the Indo-Pacific and solar power in Honduras.

Biden ended up skipping a leaders dinner on Tuesday to attend to other matters, an administration official said.

“It’s not Covid,” the official made clear. Biden had tested negative earlier Tuesday after coming into contact with the Cambodian prime minister, who tested positive for the virus.

“He just had spent a full day in meetings and needed to attend to a few things tonight (nothing urgent!),” the official said. Biden spoke to Indonesian President Joko Widodo to send his regrets for not attending the dinner. 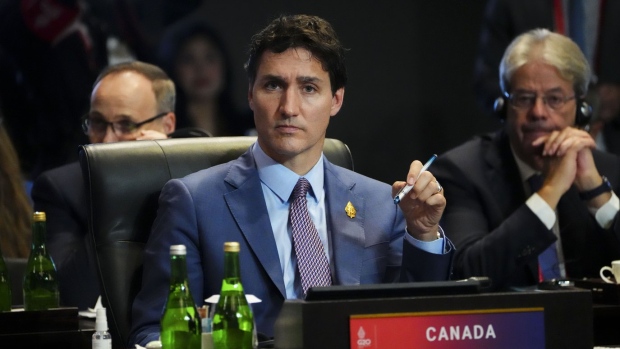 Prime Minister Justin Trudeau is announcing funding for developing countries to improve their infrastructure and make COVID-19 vaccines, at a G20 summit where geopolitics looms over work to shore up global economic systems.

At the G20 summit in Indonesia, Trudeau pledged Monday $750 million for a Crown corporation to finance infrastructure projects in Asia over three years, starting next March.

It’s the largest chunk of the forthcoming Indo-Pacific strategy that the Liberals have announced so far, and part of a G20 project meant to help low- and middle-income countries have safer and more sustainable cities.

“It will also make our supply chains stronger and create good jobs,” Trudeau said in remarks prepared for a closed-door event hosted by Indonesia, the U.S. and the European Union.

The funding will be administered by FinDev Canada, which currently has a mandate to operate in Sub Saharan Africa, Latin America and the Caribbean. It will now also help fund projects in developing countries in Asia.

“If we want to close the infrastructure gap, we need to continue finding ways to incentivize greater private sector investment. No amount of public money can single-handedly fix this issue,” the prime minister’s remarks read.

Trudeau is also announcing $80 million for global health systems, with most of the funding going to a World Bank project that helps countries prevent pandemics and respond to them.

Yet geopolitics will likely overshadow the pledges leaders make at the summit, as countries debate how to respond to Russia’s invasion of Ukraine and China’s growing assertiveness.

Canada is among the most forceful of countries pushing for G20 leaders to call out Russia for worsening inflation and global security through its war in Ukraine. But other countries have held back from calling out Russia, in an attempt to maintain good relations with the West and Moscow.

As summit host, Indonesia has urged countries to focus on finding common ground, to make sure there is some statement of consensus when the summit closes Wednesday.

“We can see that they're going through conniptions, trying to kind of get a declaration to save them from the embarrassment of not having a communiqué. So this is going to be very tricky,” said Andrew Cooper a professor with the Balsillie School of International Affairs at the University of Waterloo, who studies G20 summits. 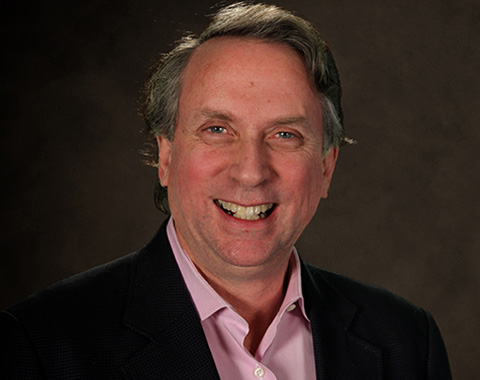 Trudeau’s office says he told his peers that the claims were “absolute garbage” and that leaders must work with facts.

Trudeau also spoke Tuesday with Chinese President Xi Jinping, and his office says he raised concerns about Chinese interference in Canada, following claims of de facto police stations operating in Canada and of China reportedly meddling in the 2019 general election.

The two leaders also spoke about North Korea’s missile launches, and the UN summit on biodiversity that China is hosting in Montreal next month.

Cooper told reporters in Bali that Canada could be following the same pattern Australia faced a decade ago, when it was isolated by China but gradually found areas of consensus with Beijing while forming stronger ties with other countries in Asia.

“Canada's been in the penalty box for a few years now,” he said.

“This is a very different China. President Xi in a consolidated position. If he's not the new Mao, he's certainly in a position where he can be a central figure that can work in a way that we didn't anticipate when the G20 was created.”

The Canadian Chamber of Commerce said the Liberals are taking a practical approach to dealing with China, by saying it will help inform businesses of the risks of working in China and let them decide whether to do so.

“You need to work with China on issues like climate change, but also we have to recognize that China's a strategic rival, and they don't play by the same rules as everybody else,” the group’s CEO Perrin Beatty told reporters in Bali.

He also said Ottawa needs to now outline its trade priorities in Asia.

“We need to be strategic. It needs to be holistic; it needs to be well communicated, so people know what the policy is,” he said.

He added that Canadian business needs assistance to take advantage of the numerous trade agreements Ottawa has signed and is currently negotiating.

“The three Fs -- food fuel fertilizer -- Canada has in bundles. And what's needed now is a clear strategy on the part of Canada to put those resources to work and to ensure that we're able to actually deliver those commodities to the rest of the world,” he said.

Beatty also said Canada should do “a full post-mortem” of supply-chain shocks during the COVID-19 pandemic, and figure out whether to warehouse critical goods in Canada, and to what extent Canada should limit trade to friendly countries. 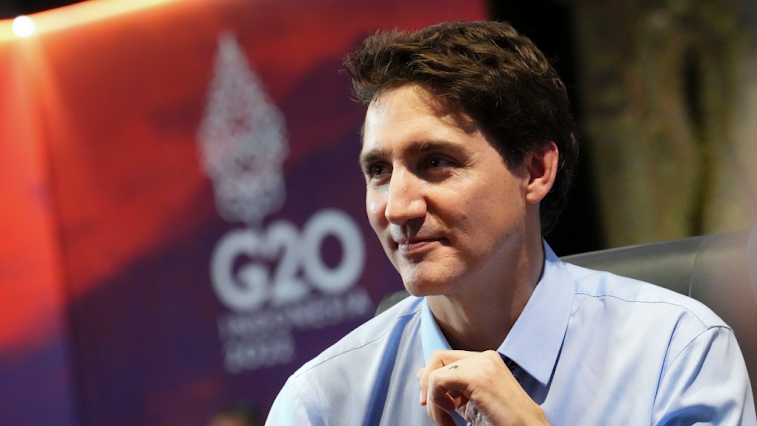