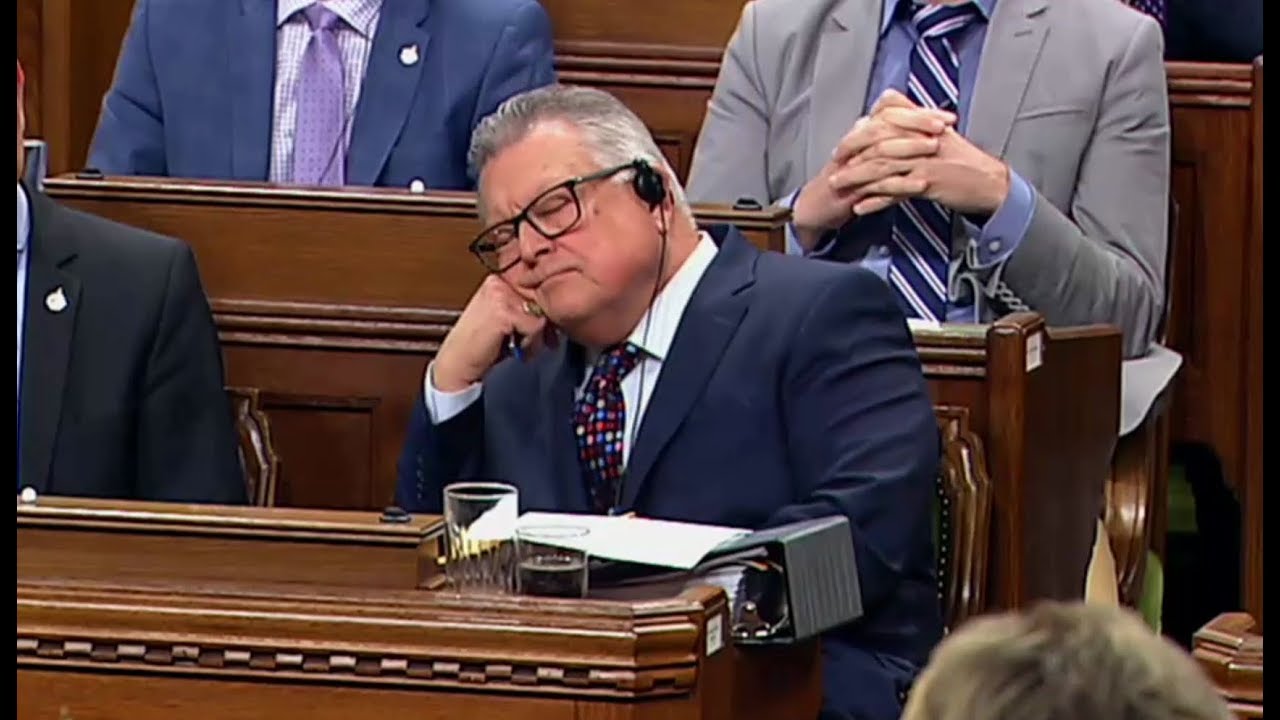 *The work of Canadian National Security and Defense weighs
heavily on Minister Goodale...seen hard  at work in parliament.
We wonder what nursery rhyme is playing on that headset?
Or is it, wait a minute its: Canada's National Anthem

The Commerce Department said it was adding Huawei Technologies Co Ltd and 70 affiliates to its “Entity List” - a move that bans the company from acquiring components and technology from U.S. firms without government approval.
Commerce Secretary Wilbur Ross said in a statement that President Donald Trump backed the decision to “prevent American technology from being used by foreign owned entities in ways that potentially undermine U.S. national security or foreign policy interests.”
Trump earlier in the day signed an executive order barring U.S. companies from using telecommunications equipment made by firms deemed to pose a national security risk.
While the order did not specifically name any country or company, U.S. officials have previously labeled Huawei a “threat” and lobbied allies not to use Huawei network equipment in next-generation 5G networks.
Huawei, which denies its products pose a security threat, said it was “ready and willing to engage with the U.S. government and come up with effective measures to ensure product security.”
It said restricting Huawei from doing business in the United States would “limit the U.S. to inferior yet more expensive alternatives, leaving the U.S. lagging behind in 5G deployment and eventually harming the interests of U.S. companies and consumers.”
Speaking at a U.S. Senate Appropriations subcommittee hearing, Mnuchin characterized two days of high-level talks with Chinese officials in Washington last week as constructive.
“My expectation is that we will go to Beijing at some point in the near future to continue those discussions,” he said. “There’s still a lot of work to do.”
He did not say when his China trip might take place.
Shares in Huawei suppliers in China skidded on the news as markets opened in Asia, with Luxshare Precision Industry down as much as 6.1%. Shares in smaller Chinese Huawei rival ZTE Corp also tumbled.
The Trump administration’s rhetoric toward China had cooled in recent days after another round of tit-for-tat tariffs between the world’s two largest economies and a selloff on global stock markets.
On Tuesday, Trump denied talks with China had collapsed and sounded an optimistic note about the chance of a deal, saying he had an “extraordinary” relationship with Chinese President Xi Jinping, whom he plans to meet at a G20 summit in Japan next month.
Trump also urged China to buy more U.S. farm products.
U.S. agricultural goods have been targeted by China’s retaliatory tariffs, and American farmers, a key political constituency for Trump, are worried.
The U.S. Department of Agriculture has paid $8.52 billion directly to farmers as part of a 2018 aid program designed to offset losses from tariffs imposed by China and other trading partners, a spokesman for the agency said on Wednesday.
The Trump administration had pledged up to $12 billion in aid to help offset losses resulting from Chinese tariffs.
GRAPHIC - Trickle down tariffs: tmsnrt.rs/2WIu31i

Trump, who has embraced protectionism as part of an “America First” agenda, has railed against what many U.S. and European officials and companies describe as China’s unfair trade practices, including forced technology transfers and intellectual property theft.
But trading partners and close allies in Europe, North America and Asia are also in the U.S. administration’s sights.
Mnuchin said the United States was close to resolving a dispute over steel and aluminum tariffs imposed on Canada and Mexico last year as the three countries renegotiated the North American Free Trade Agreement (NAFTA).
U.S. Trade Representative Robert Lighthizer met with Canadian Foreign Minister Chrystia Freeland in Washington on Wednesday to discuss the tariffs and other issues related to the U.S.-Mexico Canada Agreement (USMCA), which replaced NAFTA.
The three countries have not yet ratified the new deal.
After her meeting with Lighthizer, Freeland declined to say whether the two countries were close to a deal. But she told reporters later that ratification of the agreement would be difficult as long as the tariffs remain in place.
“When it comes to Canada it has still been the case for us that as long as the tariffs remain in place ratification would be very, very problematic,” she said on Capitol Hill.
Jesus Seade, Mexican deputy foreign minister for North America, told Reuters on Wednesday that Mexico was close to resolving its part in the tariffs dispute but wanted Canada to be in a similar position before completing the deal.
Three Trump administration officials told Reuters that Trump was expected to delay a decision on imposing tariffs on imported cars and parts by up to six months, avoiding opening yet another front in his global trade battles. The decision to delay was expected to be made on Friday, officials and automakers said.


Slideshow (2 Images)
The tariffs of up to 25 percent on cars and parts could have a devastating impact on Japan and countries in the European Union, particularly Germany.
Global stock markets, which have swooned in the past week over the rising trade tensions, gained ground on Wednesday after the reports of the planned delay.
GRAPHIC - U.S.-China tariff war and the S&P 500: tmsnrt.rs/2WA1LWX

As negotiations toward resolving the U.S.-China dispute stalled last week, the United States ratcheted up the pressure by increasing tariffs on a list of $200 billion worth of Chinese imports to 25% from 10%.
China retaliated on Monday with higher tariffs on a revised list of $60 billion worth of U.S. products.
Trump could launch 25% tariffs on another $300 billion worth of Chinese goods when he meets Xi next month. He has not ruled out imposing punitive levies on all of China’s imports to the United States.
Another escalation could disrupt global supply lines and damage a slowing world economy.
Beijing is vowing not to succumb to U.S. pressure. But on Wednesday, China reported surprisingly weaker growth in its retail sales and industrial output in April.
Data out of the United States showed U.S. retail sales fell in April as households cut back on purchases of motor vehicles and other goods, pointing to a slowdown in economic growth after a boost from exports and inventories in the first quarter. Other data showed a drop in U.S. industrial production.
The U.S. Congress is uneasy about the potential consequences of tariffs on the economy.
House of Representatives Majority Leader Steny Hoyer said U.S. consumers were in the “same boat as farmers” and would end up having to bear the burden of the tariffs. Consumer spending accounts for more than two-thirds of U.S. economic activity.
Posted by Conan Doyle at 12:23 PM