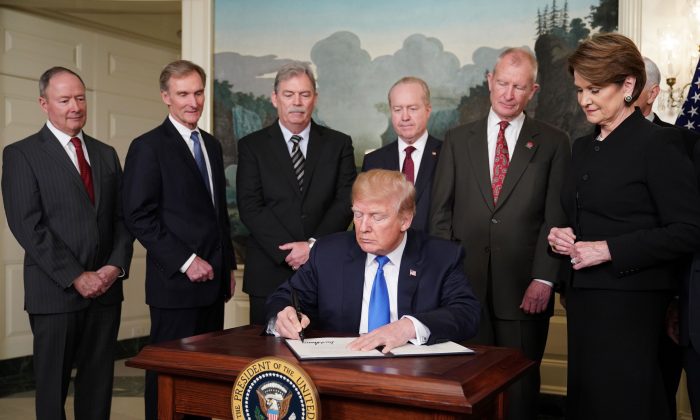 WASHINGTON/BEIJING—President Donald Trump said on May 23 U.S. complaints against Huawei Technologies might be resolved within the framework of a U.S.-China trade deal, while at the same time calling the Chinese telecommunications giant “very dangerous.”
Washington last week effectively banned U.S. firms from doing business with Huawei, the world’s largest telecoms network gear maker, citing national security concerns.
“You look at what they’ve done from a security standpoint, from a military standpoint, it’s very dangerous,” Trump said in remarks at the White House. “If we made a deal, I could imagine Huawei being possibly included in some form or some part of it.”
Trump predicted a swift end to the trade war with China, although no high-level talks have been scheduled between the two countries since the last round of negotiations ended in Washington two weeks ago. 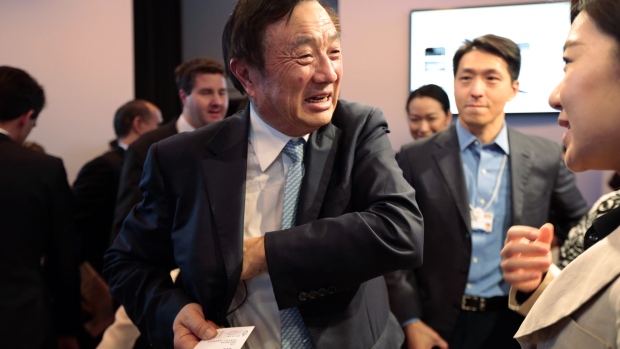 Earlier on Thursday, U.S. Secretary of State Mike Pompeo accused the chief executive of Huawei, Ren Zhengfei, of lying about his company’s lack of ties to the Chinese regime, which he said represented a security risk.
“The company is deeply tied not only to China but to the Chinese Communist Party. And that connectivity, the existence of those connections puts American information that crosses those networks at risk,” he said.

Chief Financial Officer Meng Wanzhou, who is Ren’s daughter, was arrested in Canada in December and faces extradition to the United States on charges she conspired to defraud global banks about Huawei’s relationship with a company operating in Iran.
Tech companies around the world have fallen in line with U.S. curbs on the company. Japanese conglomerate Panasonic Corp said it had stopped shipments of some Huawei components, a day after British chip designer ARM did the same, potentially crippling the Chinese company’s ability to make new chips for smartphones.
Asked if he believed more firms would stop working with Huawei, Pompeo told CNBC in an interview on Thursday: “We do. We’ve been working at the State Department to make sure that everyone understands the risks.”

US Help for Tech Firms, Farmers

U.S. lawmakers moved on Wednesday to provide about $700 million in grants to help U.S. telecoms providers with the cost of removing Huawei equipment from their networks, and to block the use of equipment or services from Huawei and Chinese telecoms firm ZTE in next-generation 5G networks.
Trump hiked tariffs on $200 billion worth of Chinese goods on May 10 and threatened to slap tariffs of up to 25 percent on an additional list of Chinese imports worth about $300 billion, prompting China to respond with levies of its own.
Sources have said the trade talks stalled after China tried to delete commitments from a draft agreement that its laws would be changed to enact new policies on issues from intellectual property protection to forced technology transfers.
With no resolution in sight, U.S. Agriculture Secretary Sonny Perdue on Thursday announced a $16 billion aid program to help U.S. farmers hurt by the conflict, with some funds to be used to open markets outside China to U.S. products. 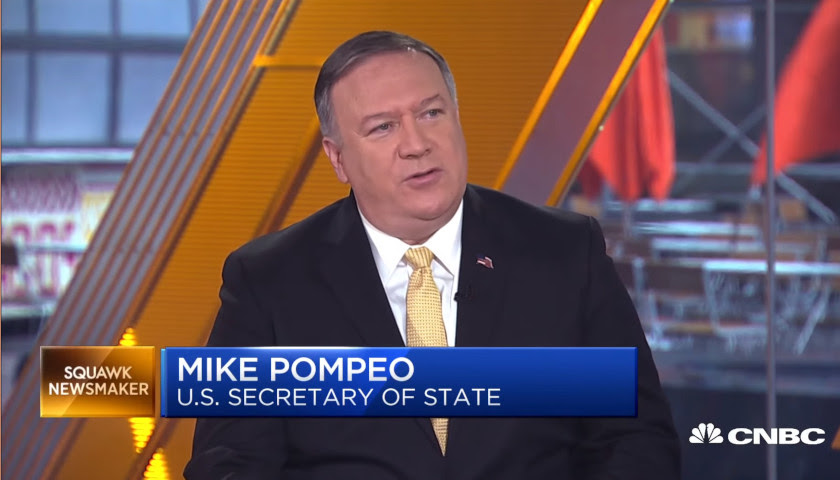 In Thursday’s interview, Pompeo confirmed a New York Times report on Wednesday that China was using high-tech surveillance to set up an intrusive policing effort that could be used to subdue its minorities, including ethnic Muslim Uyghurs.
The United States is considering Huawei-like sanctions on Chinese video surveillance firm Hikvision Digital Technology Co Ltd over the issue, a person briefed on the matter said.
Also feeding into tensions, the U.S. military said it sent two Navy ships through the Taiwan Strait on Wednesday, prompting Chinese Foreign Ministry spokesman Lu Kang to lodge “stern representations.”
Taiwan is one of a growing number of flashpoints in the U.S.-China relationship, which also include China’s increasingly muscular military posture in the South China Sea, where the United States also conducts freedom-of-navigation patrols.
Trump has embraced protectionism as part of an “America First” agenda aimed at rebalancing global trade.
He is expected to meet Chinese leader Xi Jinping at a G20 summit in Japan on June 28-29, around the time when the next levies could be ready, according to U.S. Treasury Secretary Steven Mnuchin’s calculations.
Posted by Conan Doyle at 10:08 AM