Billionaire Li Ka-shing talks about not slowing down in exclusive interview.


Natasha Khan
28 June 2016
As Li Ka-shing prepares to turn 88 in July, he takes a moment to reflect on the $80 billion empire he’s built and how it will survive without him.
“I could retire today if I wanted to, in the next five minutes or whenever,” Li said in a rare interview with Bloomberg Television, emphasizing that his son, Victor, 51, has been working alongside him for 30 years and taking care of his businesses full-time for the past few, even without a firm date for taking up his father’s mantle as chairman. “We’ll carry on what we do now.”
Known in Hong Kong as “Superman” because of his business prowess, Li has built one of Asia’s most influential conglomerates employing about 300,000 people in 52 countries—and one of its biggest personal fortunes, valued by the Bloomberg Billionaires Index at about $27 billion. He developed solid, if stolid, companies that reach into everything from homes, supermarkets, drug stores and mobile phones, to office buildings and even the energy that powers them.
“Li Ka-shing is one of those rare businessmen whose commercial instincts come close to genius,” Chris Patten, Hong Kong’s last colonial governor, wrote in an e-mailed response to questions. “He has also managed to build a serious global company which will carry on his business legacy, though nothing can replace his entrepreneurial instincts.”
Even as his investments get battered by the fallout of the U.K. referendum—a turmoil he predicted—Li remains an icon of modern Asian capitalism and an inspiration to many hoping to seize opportunity and work hard to make it prosper. His 14 listed companies, including CK Hutchison Holdings, Cheung Kong Property Holdings Ltd., Hutchison Port Holdings and Canada-based Husky Energy, had a combined revenue of $80 billion in 2015.
“His persistence in having a disciplined and diligent life is what distinguishes him from his peers,” said Christine Chow, an associate director at Hermes Investment Management in London and an adjunct professor of finance at Hong Kong University of Science and Technology. “He has convinced us that we, too, can create miracles if we put our effort in what we want, and that we should have global ambitions.”
Li also symbolizes the wealth inequality in a city known for having the most unaffordable private housing in the world and where business is dominated by a handful of families. In the interview, he called for higher corporate taxes to help tackle wealth inequality.
“Tax companies an extra 1 or 2 percent, then a lot of the poor would benefit,” he said. 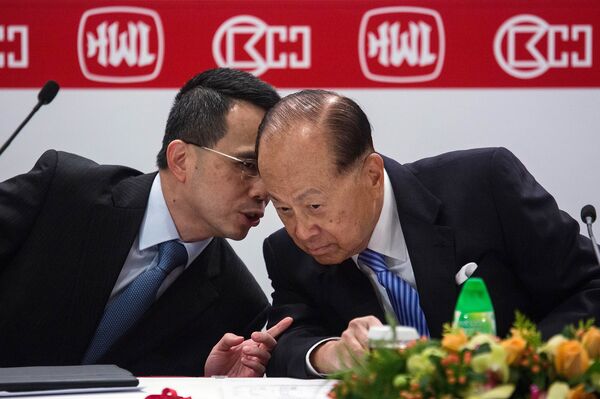 Li has also supported the founding of a second empire for his other son, Richard, 49, who built PCCW Ltd. into Hong Kong’s cable television, Internet and landline-telephone market leader, along with its telecoms subsidiary HKT Trust & HKT Ltd., and Pacific Century Premium Developments, which built Hong Kong’s Cyberport. They have a combined market value of $16.2 billion.
Li was also one of the first in the region to pledge a large portion—a third—of his wealth to philanthropic endeavors, a move he said he hopes others among the growing ranks of Asian billionaires will follow. Since the 1980s, he has donated HK$20 billion ($2.6 billion) to various causes through the foundation: building hospitals; funding universities including one in Shantou near his hometown in Guangdong province; and constructing a Buddhist monastery in Hong Kong whose towering 250-foot (76-meter) statue of the goddess Guanyin (Goddess of Mercy) can be seen for miles.
“I could retire today if I wanted to, even in the next five minutes.”


Over the years, Li’s business feats embodied the rise of the Chinese tycoon in Hong Kong. In the 1970s, he became the first Chinese to run a trading house in what was then still a British colony. In the 1980s and ’90s, he made a series of investments in the mainland just as it was opening up to the world. More recently, as China’s growth began to slow and the impact was felt in his adopted city, he further extended his portfolio of assets across Europe.
“We call him ‘Superman,’ so you can imagine the weight of his words, which can hardly be matched by anyone in Hong Kong,” said Alfred Lau, an analyst at Bocom International Holdings Co. in Hong Kong. “This is a very important part, especially when you’re striking deals.’’
Li brushed off recent criticism that he’s been pulling out of China. Calling Chinese state media reports of his wavering commitment, based on his selling properties in Shanghai to focus on investment overseas, “misguided,” Li said he is committed to the world’s second-biggest economy for the long term and has been since the late 1970s.

“From then on, my philanthropic activities in China have never stopped. First, I built hospitals,” said Li, also referencing his funding of Shantou University, which now educates more than 8,000 students. His investments in China span the energy, retail and infrastructure sectors. He also spent $2 billion developing Beijing’s Oriental Plaza, an 800,000 square meter (8.6 million square foot) office, hotel and apartment complex.
Li was also a senior adviser to Beijing on the 1997 Hong Kong handover, served on the committee that drafted its proposed constitution and was on the body that chose Hong Kong’s first post-colonial leader.
Beyond China, Li is among the biggest investors in Britain and warned during the June 16 interview that Brexit would hurt the U.K. and all of Europe. With the scenario materializing a week later, Li was unavailable to comment but his CK Hutchison flagship, which generated 37 percent of profits from the U.K. last year, said its businesses in the country would continue to thrive.
As he reflected on his life in an hour-long interview, Li ruminated on fleeing to Hong Kong at age 12 as China became embroiled in the Second Sino-Japanese war in the 1930s, and his journey to becoming one of the region’s richest billionaires from the first business he started in the 1950s, making plastic flowers.
Li said he has always been guided by the philosophy of having enough resources to be able to jump on new opportunities whenever they arise.

Cash flow “is the most important thing,” said Li. “I have always understood that the world changes a lot. Just because you’re doing well now, doesn’t mean you should be set in your ways.”
As some well-timed property investments cemented his wealth, through the years Li expanded his empire beyond plastics manufacturing to retail, energy, telecommunications, media and biotechnology—often standing out for his good timing. There’s a Warren Buffett-like side to Li that keeps his businesses slow and steady, while mostly continuing to grow.
“He’s a consummate asset trader,” said Joe Studwell, author of the books “Asian Godfathers” and “How Asia Works.” “When he buys, you can be sure that something is cheap. And when he sells, you can be sure it is fully valued.’’ 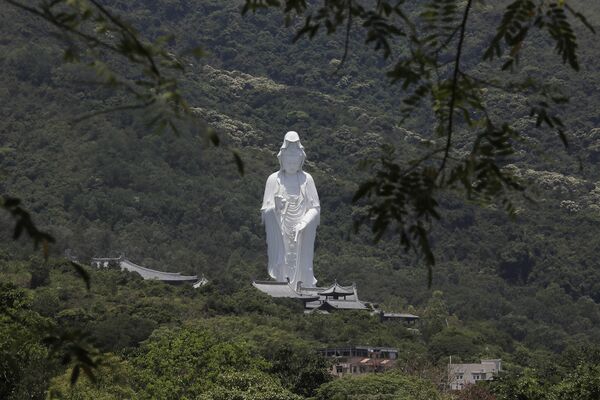 While the Cash flow “is the most important thing,” said Li. “I have always understood that the world changes a lot. Just because you’re doing well now, doesn’t mean you should be set in your ways.”

As some well-timed property investments cemented his wealth, through the years Li expanded his empire beyond plastics manufacturing to retail, energy, telecommunications, media and biotechnology—often standing out for his good timing. There’s a Warren Buffett-like side to Li that keeps his businesses slow and steady, while mostly continuing to grow.
“He’s a consummate asset trader,” said Joe Studwell, author of the books “Asian Godfathers” and “How Asia Works.” “When he buys, you can be sure that something is cheap. And when he sells, you can be sure it is fully valued.’’

While assets held by his main listed units are in relatively more stable sectors like infrastructure and property, Li’s early technology investments show his acumen: Facebook Inc., Siri before it was acquired by Apple Inc. and Spotify Ltd. Li said he has invested in almost 60 new technology companies, and “whenever there are successes, I put all the money back into the foundation.”
Analyst firm Morningstar Inc. agrees there should be no disruption when the elder Li hands over to Victor, pointing to CK Hutchison’s businesses having been “run by a team of professional managers for several years. Mr. Li’s retirement would not change our revenue and earnings assumptions on the underlying businesses.”
Li’s unique ability to see opportunities where others see challenges is still waiting to be demonstrated as an inherited trait in Victor.
“Without Li Ka-shing overseeing his corporate empire, we might start to see more of the ‘plastic’ and less of the ‘flowers’ that originally catapulted him ahead," said Mark Mihorean, who teaches business at HKUST.
For now, Li, whose birthday is July 29, hasn’t set a timetable for stepping back. Sporting a tan during the interview, he said he still plays golf two to three times a week, and is “happy” continuing as chairman of his companies.
“Even now I’m still going strong,” he said. “When I retire, I won’t go fishing. I will put even more time into the foundation.”
Li appeared visibly thinner than in the past, but he brushed off concerns about his health, saying he’s still fit and hale, peppering the interview with laughter.
“I’m lucky now, I’m quite healthy,” Li said. “I’ve sat here for quite a long time and I still remember what to say.”
He also showed off his Citizen watch, a Japanese brand whose current range starts at around $250—in contrast to multi-thousand-dollar luxury brands. It’s set 30 minutes fast, “because even if I forget an appointment—anywhere in Hong Kong, I can be there in half an hour,” Li said.
Referring to discontent in the city, seen in the pro-democracy protests of the Umbrella Movement in 2014 and in political fallout since, Li talked about creating prospects and hope for young people. He said he yearns for them to have a genuine thirst for knowledge, and referred to times when he strived to learn in dire circumstances. As books were being burned as fuel during wartime, he acquired teacher’s manuals to give himself an education.
His father, a primary school principal, died of tuberculosis a year after the family arrived in Hong Kong. It was perhaps this event that shaped Li into who he has become.
“I was very influenced by him from a young age and realized that education is the most important thing,” Li said.
—With assistance from Prudence Ho, Fion Li, Samson Ellis, Yoko Shimizu and Karen Ka-Ying Lee.