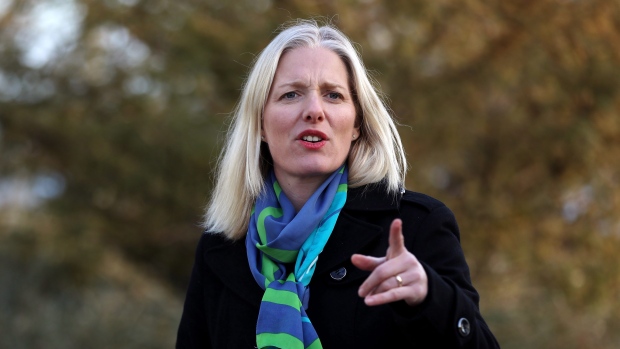 Environment Minister Catherine McKenna is seen on the shore of Lake Ontario in Toronto on Friday, Dec. 1, 2017. McKenna preaches...getting China into Canada's plan to wean the world off coal-power would be a huge win but says China isnt interested at all.
Yet another failure for the Trudeau government in China. The Trudeau trip to China has turned into a  very expensive waste of time.

After Trudeau was embarrassed yesterday, China has snubbed Catherine McKenna’s anti-coal alliance with the U.K.

“McKenna was in Beijing this week as part of Prime Minister Justin Trudeau’s China trade mission. She tells The Canadian Press she knows China is committed to climate change, but its reliance on cheap untreated coal is too heavy for it to join the alliance Canada launched with the United Kingdom last month.”

While McKenna has shown a disregard for Canadian workers in the coal industry who are losing their jobs as the industry is “phased out,” she actually made excuses for China.

The report points out “McKenna says China still needs to find a way to provide electricity to its 1.3 billion citizens and it wont eliminate coal as a source of that power.”

This reveals the total fraud and absurdity of the Trudeau government environmental agenda. Our own coal industry and coal workers get taken down by our own government, while that same government makes excuses and protects the worlds largest polluter.
Furthermore, the anti-coal alliance has been ignored by most big coal producers and coal users, including the U.S., India, and Germany.
So, McKenna’s effort will most definitely hurt Canadian workers with major job losses as a result.
It’s epic hypocrisy, and provides another embarrassing failure for the Trudeau government.
Posted by Conan Doyle at 5:36 PM