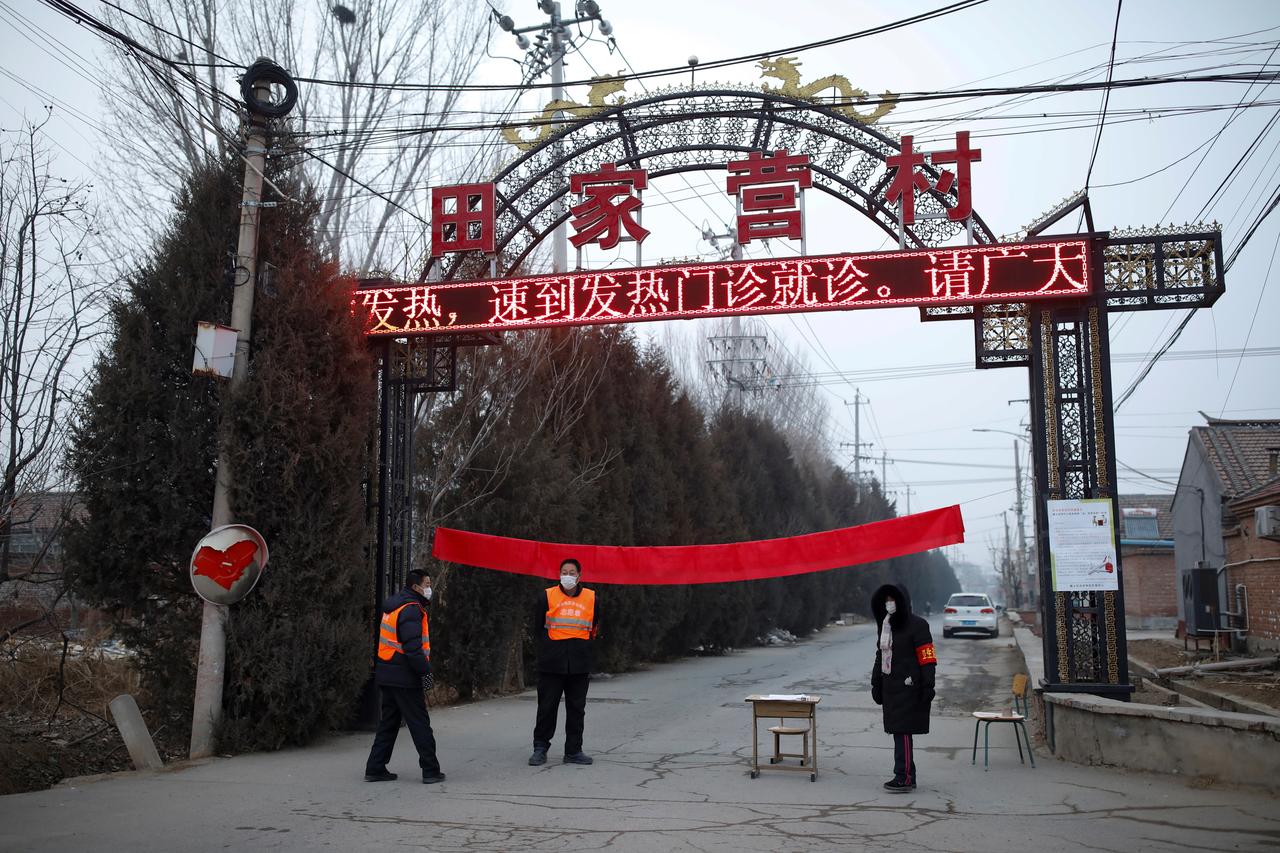 BEIJING (Reuters) - In a village in Beijing’s far northeastern Shunyi district, residents have set an informal rule: “If you’re here, don’t leave. If they’ve left, don’t let them come back.”
Red tape was tied across the road at the entrance to the small community Monday. Village committee members wearing face masks and high-visibility vests manned the blockade.
Since last week, a public address system had been broadcasting messages, residents told Reuters, warning people against inviting guests and urging anyone who has been to Wuhan, the epicenter of a spreading coronavirus that has killed 106 people, to register with authorities.
“We grow our own leeks ... we have a lot of frozen pork, rice and oil. There’s no need for us to go outside,” villager Lu Weian, who lives in a traditional village house with high walls, told Reuters by phone.
“Every house is its own quarantine zone,” she said.
The village, hundreds of miles from Wuhan, is one of many across China shunning outsiders amid rising panic over the virus that has infected thousands.
A decision by authorities to lock down travel in Hubei province, of which Wuhan is the capital, has spurred a counter-movement of communities closing their gates to outsiders.
Social media showed dozens of images and videos from across China of similar vigilante efforts.
Some showed villages blocking roads with vehicles, others constructing make-shift barriers out of tape and cinder-blocks.
Zhengding county in Hebei province, outside Beijing, on Monday began offering 1,000 yuan ($145) to tipsters for credible information about unregistered people who may have links to Wuhan.
“We’ve done our work very carefully and registered everyone coming from the epidemic regions,” said a man surnamed Ye who was manning the tip line at the county’s Communist Party office when Reuters called on Tuesday.
“We haven’t got useful tips, though there are people calling offering clues. In most cases they spotted cars with Hubei plates,” he said.

The efforts aren’t limited to villages.
In central Beijing, some residents and authorities are tracking and registering people who have been to Wuhan.
“It’s our responsibility to find everyone and enforce safety... No one should be afraid to be an informant,” said Chen Gang, a retired resident in central Dongcheng district, who is a designated community leader in his neighborhood.


Village committee members wearing face masks and vests stand at the entrance of a community to prevent outsiders from entering, as the country is hit by an outbreak of the new coronavirus, in Tianjiaying village, outskirts of Beijing, China January 28, 2020. REUTERS/Carlos Garcia Rawlins
On Saturday, Chen went door-to-door helping officials check whether people had recently visited Wuhan or had guests from Hubei. He said several people with Wuhan links were told to stay at home for a quarantine period.
For people from Wuhan, the stigma is causing emotional strain.
“I think I’m the loneliest person in the world right now,” said 23-year-old Peking University student Carmen Wang, a Wuhan native who canceled plans to return home from Beijing when news of the virus broke.
Wang said she has been shunned by classmates, who sent messages in a class group chat warning others not to visit her. She orders out for food and watches TV alone.
“Even if they came and ate food with me or hung out, if I even sneezed, they would accuse me ... it’s better this way,” said Wang.
Villagers took pains to justify their exclusivity.
“It’s not that we are without human emotions, but lives come first,” read a sign attached to an earth-moving machine parked across a road to block traffic in an image posted on social media.
A man who answered a call from Reuters to the phone number listed on the sign declined to give the location of the village.
“I don’t want to tell you because I don’t want you coming here,” he said.