Chinese citizens are furious at the death of the whistleblower doctor censored for talking about the coronavirus.


Chinese citizens are furious at the death of the whistleblower doctor censored for talking about the coronavirus. His mother said she couldn't even say goodbye.

Chinese citizens are furious after the death of Li Wenliang, the whistleblower doctor who was censored for warning about the beginning of the coronavirus, and his mother said she wasn't able to say goodbye.
Li died of the coronavirus at 2:58 a.m. local time on Friday, the Wuhan Central Hospital, where he also worked, said in a statement on the microblogging site Weibo.
"During the fight against the novel coronavirus outbreak, Li Wenliang, an ophthalmologist at our hospital, was infected. Efforts to save him were ineffective. He died at 2:58 a.m. on Feb. 7. We deeply regret and mourn his death," the post said.

Li had warned some of his medical-school colleagues about the virus on December 30, about three weeks after the outbreak started but shortly before the government officially acknowledged it. The virus has now killed more than 630 people, mostly in China, and spread to more than 20 countries.
Li had said that some patients at his hospital were quarantined with a respiratory illness that seemed like SARS. But he was reprimanded and silenced by the police in Wuhan, made to sign a letter that said he was "making false comments."

People's Daily, the official newspaper of China's Communist Party, reported that he said on social media before his death: "After I recover from the disease, I will work on the front line of the battle. The virus is still spreading, and I don't want to be a deserter." 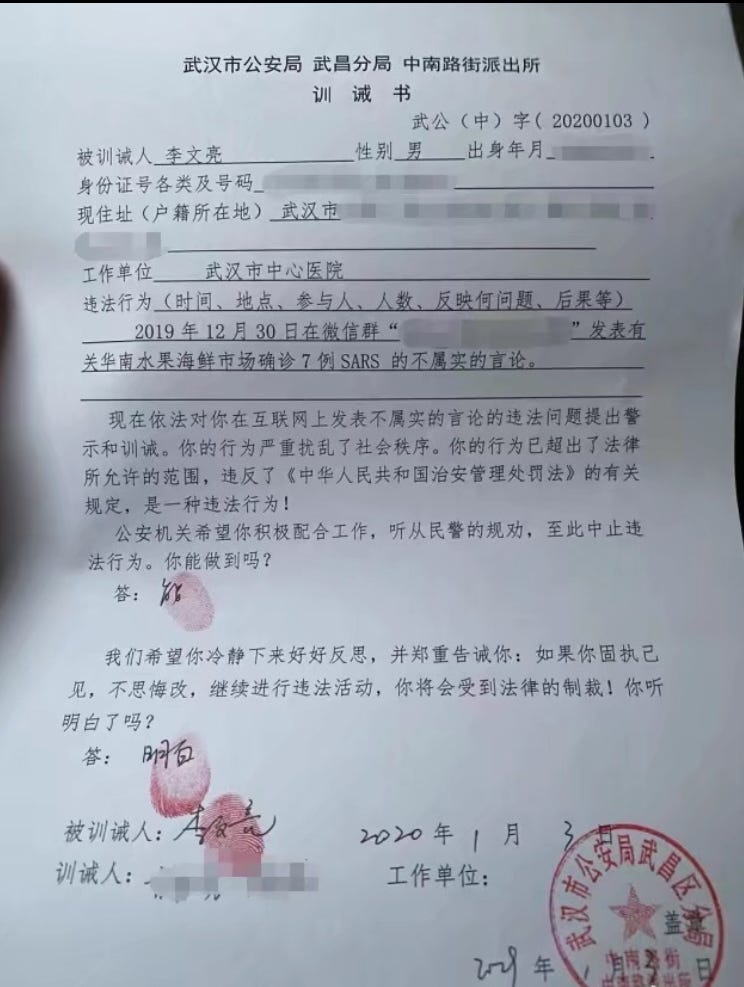 Li is now being hailed as a hero in China, with posts seeking justice for him and calling for freedom of speech trending on Weibo. Many were removed from the site, which often complies with government demands to censor politically sensitive content.
The top two trending hashtags on Weibo on Friday were "Wuhan government owes Dr. Li Wenliang an apology" and "We want freedom of speech," the BBC reported. It said that hours later those hashtags had been removed and "hundreds of thousands of comments had been wiped."
According to the BBC, one comment on Weibo said: "This is not the death of a whistleblower. This is the death of a hero."
Li's death was the most-read topic on Weibo on Friday, with more than 1.5 billion views, The Guardian reported.

Li's death was also widely discussed in private messaging groups on WeChat, the instant-messaging sister app to Weibo, The Guardian said.
CNN called the response "overwhelming, near-universal public fury."
One image shared on Weibo showed that someone had carved "farewell Li Wenliang" into the snow in Beijing. 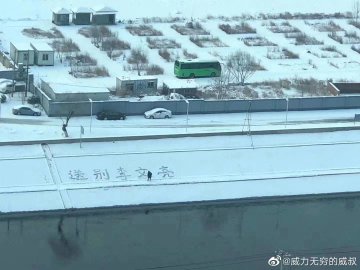 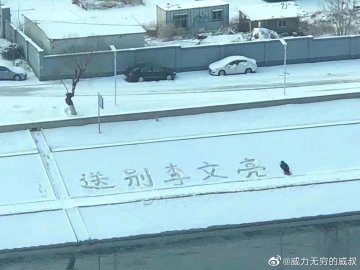 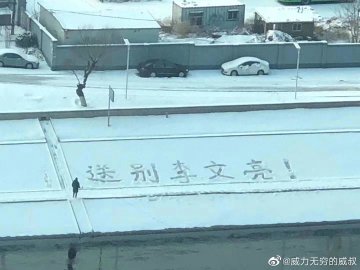 293 people are talking about this


People's Daily wrote on Friday: "At present, China has entered a critical stage of epidemic prevention and control work. The country needs solidarity more than ever to jointly win a battle that it cannot lose, so that its people can be protected against disaster and patients around the country can return to health.
"No one can make an accurate prediction about when the battle will end, but everyone knows that only with sufficient confidence can the people win the battle against the novel coronavirus."

In a heartbreaking interview with the Chinese news site Pear Video on Friday after Li's death, Li's mother said she never got to say goodbye to her son in his final days.
She said the hospital sent a car to pick up her and Li's father, "then they sent his body to the crematorium."
She said they "never, never, never saw" him for the last time.
"Thirty-four years old. He had so much potential, so much talent. He's not the kind of person who would lie," she said, alluding to Li's reprimand by the police in Wuhan.
Li had a wife, who is pregnant, and a 5-year-old son, his mother said. Shortly after the outbreak, Li sent them to Xiangyang, a city about 200 miles from Wuhan.

The Chinese government has been accused of covering up the virus

Chinese authorities have been criticized as responding slowly to the virus. Officials have arrested citizens accused of spreading rumors online and detained journalists covering the virus.
The announcement of Li's death also came amid conflicting statements in which state media reported that he had died, then that he was still alive, and then again that he had died.
China's Communist Party has sent investigators to Wuhan to do "a comprehensive investigation into the problems reported by the public concerning Dr. Li Wenliang," state media reported Friday.

Earlier this month, the Chinese government issued a rare statement acknowledging that its response to the virus had "shortcomings and deficiencies."
The World Health Organization has largely defended China's response, saying it has been much more open with the world about this virus than it was in the early 2000s with the SARS outbreak, which it tried to cover up.
President Donald Trump also tweeted his support for Chinese President Xi Jinping on Friday, calling him "strong, sharp and powerfully focused on leading the counterattack on the Coronavirus."
Many other doctors have caught the virus in Wuhan, where the health system has become overwhelmed and supplies are running low.
Alexandra Ma contributed reporting.
Have you been personally affected by the coronavirus epidemic? Is your city or community on the front lines of this virus? Have you or has someone you know been tested or diagnosed? We want to hear your story. Please email rmahbubani@businessinsider.com.
Posted by Conan Doyle at 8:04 AM