Ah Yes..The Race Card Again: Vancouver woman says she coughed on a flight and was told to wear a mask because she's Asian 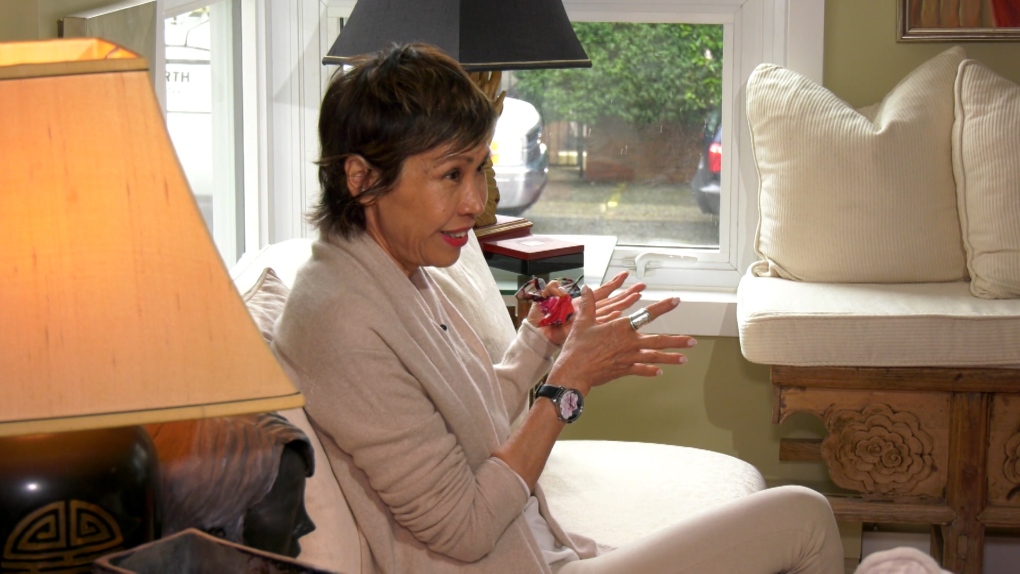 NOW PLAYING
A Vancouver woman says she's fallen victim to what she describes as coronavirus hysteria, saying she was racially profiled on a flight home from Mexico.

NOW PLAYING
A Surrey woman and her family are among the 3,700 passengers locked away on a cruise ship off the coast of Japan.


CTV National News: Delay in getting out from Wuhan

NOW PLAYING
After many delays, the U.S. has stepped up and offered Canada a few seats to fly out residents from Wuhan. Annie Bergeon-Oliver reports.

NOW PLAYING
The press gallery panel discusses the delay in getting Canadians back from Wuhan and why Canada was at a disadvantage.


'Trudeau is doing his job': Mulcair on evacuations

NOW PLAYING
CTV's political commentator Tom Mulcair says the thinks the federal gov’t is doing well with the situation to get Canadians out of China.

NOW PLAYING
Hundreds of Canadians trying to leave Wuhan were given a timeline by the government. Annie Bergeron-Oliver has the latest.


Psychologist on the effects of being quarantined

NOW PLAYING
UBC psychologist Steven Taylor discusses the psychological effects of being quarantined as a response to an infectious disease outbreak.

NOW PLAYING
Difficult decision for families who may be separated, as Canadians return from China, CTV's Stefan Keyes with the latest.

NOW PLAYING
Rob Oliphant, the parliamentary secretary to the foreign affairs minister, discusses the delay in getting a charter plane to Wuhan.


Canadians in China to be airlifted on Thursday

NOW PLAYING
From CTV News Channel: Steven Li is one of 312 Canadians who has requested assistance to leave Wuhan, China. He explains his situation.


Father on his 15-month-old daughter in Wuhan

NOW PLAYING
Richard Fabic's 15-month-old daughter is in Wuhan with her grandparents and has been offered a seat on the Canadian plane heading to China.


Canadians in China wait on plane

NOW PLAYING
Canadians waiting to leave Wuhan are being told they'll be airlifted out this week. The government has chartered a plane headed to Asia.

NOW PLAYING
Annie Bergeron-Oliver has the latest on the coronavirus and the effort to retrieve Canadians in Wuhan.

NOW PLAYING
The coronavirus has sent stocks in China plunging. John Vennavally-Rao on the economic impact.

NOW PLAYING
Health Minister Patty Hajdu discusses efforts to fly Canadians from Wuhan, where the city is under lockdown over the coronavirus.

NOW PLAYING
Health Minister Patty Hajdu provides an update on how the government will handle Canadians once they come back from China.

NOW PLAYING
As the number of cases and fatalities increase, hundreds of Canadians are still waiting to find out if they’ll be flown out of China.

NOW PLAYING
From CTV Kitchener's Natalie van Rooy: Canada is getting ready to evacuate hundreds of Canadians from the locked-down Chinese city of Wuhan.

NOW PLAYING
Medical officials are providing an update on the coronavirus in our province and the plan to help Canadians return home.


'Hopefully my name is on the list' to leave China

NOW PLAYING
From CTV News Channel: Steven Li is a Canadian citizen teaching in Wuhan, China that is now trapped due to the coronavirus outbreak.


Protecting nurses from the coronavirus


Coronavirus 'isn't as dangerous as worried'

NOW PLAYING
Preparations are underway at CFB Trenton for the hundreds of Canadians who will soon land from China. Annie Bergeron-Oliver reports.

NOW PLAYING
Health Minister Patty Hajdu discusses what is being done to protect Canadians against coronavirus.

NOW PLAYING
Molly Thomas reports on the drastic measures, including travel bans by the U.S. and Australia, being imposed in response to the coronavirus.

NOW PLAYING
China is now using drones with loudspeakers to assist its response in fighting the new coronavirus. Vanessa Lee has the details.

NOW PLAYING
Kate Broderick of Inovio Pharmaceuticals says the company hopes to have a vaccine ready for human clinical testing by early summer.


Benefits of WHO's coronavirus declaration

NOW PLAYING
Dr. Emma Hodcroft says the WHO's declaration raises awareness and will sharpen the focus of governments in containing the virus.

NOW PLAYING
Kai Wood and Xiaolin Wang are a couple from Chongqing, China that have voluntarily put themselves in quarantine amid coronavirus outbreak.

NOW PLAYING
B.C. health officials address what the province is doing to stop the spread, and other concerns raised by the public.

NOW PLAYING
The WHO declared a global health emergency over coronavirus and there are calls for an international response. John Vennavally-Rao reports.

NOW PLAYING
Misinformation and confusion continue to spread despite best efforts of health officials. Avis Favaro on what you need to know.

NOW PLAYING
Despite public health officials urging calm, there are signs of growing confusion and panic across the globe. Paul Workman reports.

NOW PLAYING
Officials with the World Health Organization have declared the coronavirus a global health emergency to help prepare countries.


Why the WHO declared a global health emergency


'It's about time' WHO declares emergency: expert

NOW PLAYING
A look at the coronavirus misinformation that's been spread online and debunked by fact-checking organizations.


PM: Time for Canadians to 'pull together'

NOW PLAYING
Prime Minister Justin Trudeau says now is the time for all Canadians to pull together and lean on one another.


Steps of developing a vaccine

NOW PLAYING
Dr. Arthur Reingold, a professor of Epidemiology, speaks about the research that goes into developing a vaccine.


No coronavirus in Quebec, but toll abroad rises

NOW PLAYING
While there are still no coronavirus cases in Quebec, the World Health Organization will meet to determine if it is a global health crisis

NOW PLAYING
Ontario's chief medical officer says that the low rate of coronavirus cases despite exposure should be reassuring for Canadians.


General public should be concerned about flu

NOW PLAYING
Amesh Adalja, an infectious disease expert, weighs in on why the WHO hasn't declared the virus an emergency and the risk to the public.

NOW PLAYING
Over a hundred Canadians are stranded in Wuhan and desperately want to come home amid the coronavirus outbreak.

NOW PLAYING
Monte Gisborn's wife and daughter are stuck in China. He joins us with his wife Daniela Luo to share their story.

NOW PLAYING
From CTV Kitchener's Stephanie Villella: At least one student from the University of Waterloo is in Wuhan, China, the school confirms.

NOW PLAYING
PM Trudeau says the federal government will provide consular services for Canadians who are currently in China.


What’s being done about coronavirus?

NOW PLAYING
From CTV Saskatoon's Francois Biber: The spread of the virus has health officials across the country on alert.


Power Play: 'Everything we are doing is textbook'

NOW PLAYING
The View from the Hill panel discusses the Canadian government's response to the coronavirus outbreak in China and the next steps to take.


VANCOUVER -- While flying home from Mexico this week, a Vancouver woman says she was told by flight attendants on an Aeromexico flight to wear a mask because she coughed.
Reed Chen had spent two weeks on vacation: one week in Huatulco for a pickleball camp and a second on her own in San Cristobal. During the second week, she came down with a cold.
“I emailed my travel agent right away," Chen said. "I said I wanted to come back. She said, 'With your fever, you may not be able to fly, so you may as well stay and relax until you get better.' I slept for three days. I eat nothing, but drink water.”

Full coverage CTVNews.ca/Coronavirus
Canadians urged to leave China now as first evacuation attempt hits snag
Coronavirus deaths top 560, China opens new hospitals
Two Canadians on cruise ship in Japan test positive for coronavirus
Canadians in quarantine: What should evacuees expect on their return?
Drone footage shows deserted streets of Wuhan under lockdown
Vancouver woman says she coughed on a flight and was told to wear a mask because she's Asian
Baby tests positive for coronavirus just 30 hours after birth
B.C. health officials prepare for Canadian rescue plane from China to touch down at YVR
This Chinese doctor tried to save lives, but was silenced. Now he has coronavirus
Canadian families frustrated they will be separated on evacuation flight from China
Officials question report of virus spreading before symptoms
Cathay Pacific asks staff to take unpaid leave due to virus
Tokyo Olympics CEO: 'I'm seriously worried' over China virus
2019 nCoV: Why does the deadly coronavirus have such a clunky name?

Her sickness started to clear and she flew home as scheduled on Feb. 2.
But her flight home left her furious and scared. She says she coughed once and a flight attendant immediately asked if she had been to China. She explained hadn’t been for 20 years.
“Another male flight attendant came to me, this time he was interrogating me," Chen said. "He said tell me where have you been, have you been to China? Have you been to Wuhan?”
A few minutes later he came back with a face mask, telling her the captain requested she wear it.
“I said, 'Did you ask all the people coughing to wear it?'" Chen recalled. "He said, 'No, people only complain about you.' I asked, 'Because I cough?' Because I’m Asian, of course. I’m the only Asian on the whole plane.”
Chen said she refused to put the mask on and the attendant threatened to report her, saying a scanner at the airport would pick up her fever.
“If I ever have anything it’s a Mexican virus," she said. "it’s definitely not coronavirus.”
She says she felt humiliated, singled out, and discriminated against.
“The airline needs to apologize for putting me through such a treatment and they have to change their way of dealing with passengers," Chen said. "My rights cannot be taken away just because some other people are being paranoid.”
Chen has not filed a formal complaint with Aeromexico, but says she plans to contact them. CTV News reached out to the airline, which says it will review the case.
RELATED IMAGES