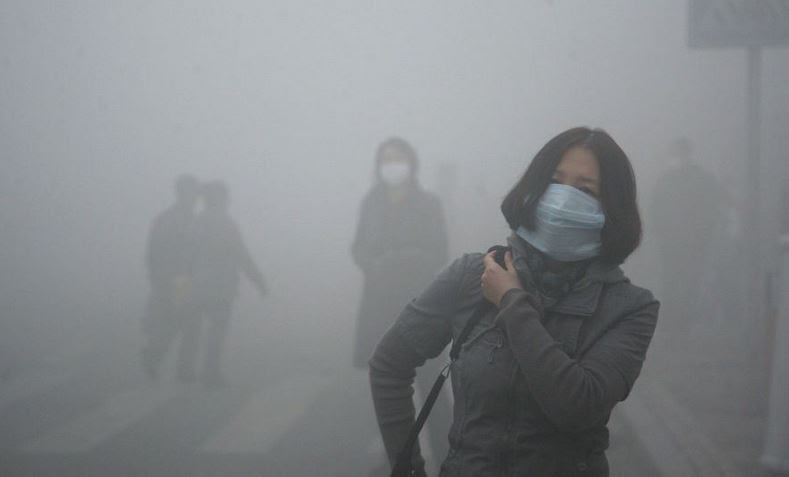 By Dr. Mercola
Air pollution is a traveling, insidious health problem. In other words, air pollution created in China affects those in Canada, and pollution that enters the air in Asia also affects people living on the California coast. Air pollution is a worldwide problem that must be addressed with worldwide solutions. The Commission on Pollution and Health1 is an initiative of The Lancet, the Global Alliance on Health and Pollution and the Icahn School of Medicine at Mount Sinai. A report from the Commission found:2,3

"[T]he largest contributor to pollution-related deaths is air pollution ... linked to an estimated 6.5 million deaths in 2015 as a result of diseases such as heart disease, stroke, lung cancer and COPD [chronic obstructive pulmonary disease]."

Fine particulate matter (PM 2.5) is the most studied type of air pollution and refers to dust, dirt, soot, smoke or particles that are smaller than 2.5 micrometers in diameter. These particles of air pollution are so fine they are able to enter your system through your lung tissue and trigger chronic inflammation, which in turn increases your risk of health problems. A recent study has found exposure to these fine particles may be a factor affecting the quality of men's sperm and fertility.4

In this study, researchers evaluated the quality of sperm from nearly 6,500 men ages 15 to 49 between 2001 and 2014. The men willingly participated in a standard medical examination program in Taiwan. The quality of the semen was evaluated based on 1999 standards developed by the World Health Organization (WHO) that included concentration, motility and morphology.5 The researchers estimated the particle concentration at the participant's home using a spatiotemporal model and satellite optical depth data.
Data was evaluated using three-month and two-year averages of exposure to particulate matter. They found a robust association between altered morphology and level of exposure to PM 2.5 particulate pollution. In fact, with every incremental increase in exposure to particulate matter, sperm morphology degraded by 1.29 percent.
This was the largest study evaluating the effect particulate pollution has on semen quality to date. The negative association between air pollution and sperm morphology was found in studies6 done in China [which had the most cases],7 the Czech Republic8 and Poland.9 The lead author of the featured study commented on the results, saying:10

"Particulate matter contains many toxic chemicals such as heavy metals and polycyclic aromatic hydrocarbons, which have demonstrated harm to semen quality in laboratory and animal studies."

These results are concerning as sperm morphology has a critical long-term effect on fertility and on the health of babies born from men whose sperm is affected by pollution. Research has demonstrated the health of a man's sperm11 is affected by lifestyle choices and consequently has an effect on his children.12

Next Generation's Health Affected Before Birth

The effect air pollution has on the health of your family extends to your baby before they are born. In a study from Greater London, researchers found a link between exposure to air pollution and birth defects.13 The researchers looked at air pollution and noise pollution between 2006 and 2010.14 They amassed data from just over 540,000 babies born in those years and whose mothers lived in the prescribed geographical area.
The data indicated the average exposure to pollution was 14 micrograms per cubic meter of PM 2.5-sized particulates. For every 5 microgram-per-cubic meter increase of particulates, the researchers discovered a 15 percent increase in low birth weight births.
Children born at a low birth weight are at higher risk for Type 2 diabetes, heart disease, obesity and high blood pressure as well as have a greater risk for birth defects.15 At birth, these babies are also at risk for respiratory distress syndrome, bleeding in the brain and necrotizing enterocolitis.
There are several standards for what is considered "safe" exposure to particulate matter. The U.S. Environmental Protection Agency (EPA) standard for exposure was 15 micrograms per cubic meter in 1997. In 2009, the standard was remanded by the U.S. Court of Appeals and revised in 2012 to 12 micrograms per cubic meter averaged over three years.16 The WHO standards suggest that 10 micrograms per cubic meter should be the safe limit.
However, one author of this study, Mireille B. Toledano, an epidemiologist at Imperial College London, stated there really is no safe level of pollution and went on to comment on the results of the study, saying:17

A study performed by researchers from the Cincinnati Children's Hospital found similar results. The study, published in the journal Environmental Health,18 demonstrated increased exposure to small particulate pollution increased the risk of preterm birth. A 19 percent increased risk for preterm birth was identified, especially when pregnant women's exposure was greatest in the third trimester.19
Another study from the University of Cincinnati found women exposed to high levels of small particulate pollution in the month before and after conception had a higher risk of delivering a baby with birth defects such as cleft lip and palate or heart abnormalities.20

Scientists believe that air pollution may also be fueling bad behavior in teenagers. Evidence from a large study shows a strong link between small particulate air pollution, underlying changes to the brain and resulting behavioral traits. The study involved teens living in the Los Angeles area and found nearly 75 percent were exposed to unhealthy levels of PM 2.5.
The researchers believe these particulates make their way into the teens' developing brain tissue and trigger an inflammatory response that ultimately leads to antisocial behavior. Diana Younan, lead author and preventive medicine research associate at the University of Southern California's Keck School of Medicine commented:21

"These tiny, toxic particles creep into your body, affecting your lungs and your heart. Studies are beginning to show exposure to various air pollutants also causes inflammation in the brain. PM2.5 is particularly harmful to developing brains because it can damage brain structure and neural networks and, as our study suggests, influence adolescent behaviors."

The researchers studied the behavior of nearly 700 teens and found those who were exposed to more traffic fumes were also more likely to exhibit antisocial behavior, such as lying, cheating, truancy, stealing, arson or substance abuse.22 The researchers found air pollution was higher close to highways and in neighborhoods with limited amounts of foliage. They also found the teens who lived in these areas were more likely to demonstrate delinquent behavior.
Air quality was measured daily using 25 air quality monitors in Southern California between 2000 and 2014 and computer analysis was used to compare the address of the participant with the PM2.5 levels measured. Nearly 75 percent of the teens were breathing air that exceeded the U.S. government's recommended 12 micrograms per cubic meter, and in some areas the levels were nearly double that amount. Younan points out:23

"Many affordable housing developments are built near freeways. Living so close to freeways causes health problems such as asthma and, perhaps, alters teenagers' brain structures so they are more likely to engage in delinquent behavior."

"If you live in an area with high air pollution, like near a freeway or in a neighborhood with little greenery, try to avoid being outside so much and keep windows closed as much as possible when the ambient PM2.5 levels are high. Try to compensate for air pollution by having a good indoor environment and healthy family dynamics.

A bad parent-child relationship causes a stressful family environment, and if this goes on for too long, the teenager could be in a chronic state of stress. This could wreak havoc on the body, making teens more vulnerable to the effects of exposure to small particles. Many scientists suspect PM2.5 causes inflammation in the brain or somehow travels directly into the brain and messes with neural network connections, resulting in the observed bad behaviors."

PM 2.5 particulate pollution is found in smog, car exhaust and emissions from burning wood and industry manufacturing plants. This type of air pollution is found both inside your home and outdoors. Air pollution is not only strongly associated with the issues discussed but was responsible for 6.4 million deaths worldwide in 2015.25 In that same year tobacco was responsible for 7 million deaths, AIDs for 1.2 million deaths and tuberculosis for 1.1 million deaths.
The nature of air pollution worldwide has been changing as indoor pollution sources have moved from burning biomass fuels for heating and cooking to renewable energy. On the other hand, outdoor air pollution is growing with an increasing population, growth of cities worldwide, proliferation of toxic pesticides and globalization of industrial production.
The growth in air pollution has global economic repercussions, as it was responsible for $21 billion in economic losses that include medical expenses, lost productivity and premature death.26 Diseases that were caused by air, water and soil pollution accounted for 16 percent of all deaths worldwide in 2015.27
Unfortunately, many of those deaths occur in low- to mid-income countries and a disproportionate number of children suffer the results as early exposure to pollutants can result in disease, lifelong disability and premature death.28 Co-leader of the Commission, Philip Landrigan from Icahn School of Medicine at Mount Sinai, commented on the newest report:29

"Pollution is much more than an environmental challenge — it is a profound and pervasive threat that affects many aspects of human health and well-being. It deserves the full attention of international leaders, civil society, health professionals and people around the world.

Despite its far-reaching effects on health, the economy and the environment, pollution has been neglected in the international assistance and the global health agendas, and some control strategies have been deeply underfunded."

Lifestyle Choices May Buffer the Effects of Air Pollution

While the problem of air pollution is a global one, there are strategies to consider that may buffer some of the effects of air pollution on your health. You'll find strategies to help reduce your exposure in your home, in your car and at your workplace in my previous articles:
Specific dietary measures may also have a protective effect. Overall, seek to include mostly whole foods in your diet, including anti-inflammatory vegetables and healthy fats. Other dietary interventions you may consider include:
•Omega-3 fats
These are anti-inflammatory in nature and may help mitigate some of the adverse effects to your heart health and triglycerides caused by exposure to air pollutants. The omega-3 fats that are most effective are animal-based, such as found in wild-caught Alaskan salmon, mackerel and sardines.30
•Broccoli Sprouts
Broccoli sprout extract was shown to prevent the allergic nasal response that occurs upon exposure to particles in diesel exhaust, such that the researchers suggested broccoli or broccoli sprouts could have a protective effect on air pollution's role in allergic disease and asthma.31
•Vitamins C and E
Among children with asthma, antioxidant supplementation including vitamins C and E helped to buffer the impact of ozone exposure on their small airway.32
•B Vitamins
In a small-scale human trial, researchers used high doses of vitamins B6, B9 and B12 to offset damage caused by very fine particulate matter in air pollution.33 Four weeks of high-dose supplementation reduced genetic damage in 10 gene locations by 28 percent to 76 percent, protecting mitochondrial DNA from the effects of air pollution.
In addition, purifying your home's air is important. Photocatalytic oxidation (PCO) is one of the best technologies available. Rather than filtering the air, PCO actually acts as an air purifier, cleaning the air using ultraviolet (UV) light. Unlike filters, which simply trap pollutants, PCO transforms the pollutants into nontoxic substances.
Typically, this occurs when the UV light reacts with a titanium dioxide film and water, creating hydroxyl radicals that essentially oxidize the pollutants, rendering them harmless. Research has shown that, in the presence of air pollutants from building materials and furniture, PCO improves indoor air quality based on both sensory assessments made by study participants as well as measurements such as Proton-Transfer-Reaction Mass Spectrometry (PTR-MS).34
Posted by Conan Doyle at 2:15 PM