‘The Gang of Fudan’ Behind Xi Jinping’s Anti-America Narrative 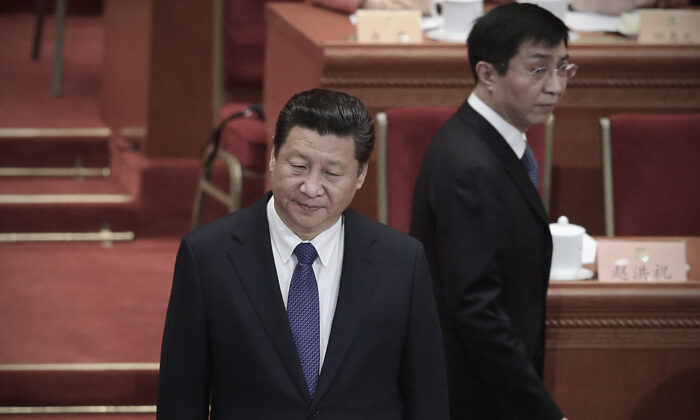 Chinese leader Xi Jinping (L) and member of the Political Bureau of the CPC Central Committee Wang Huning (R) arrive at the closing session of the Chinese People's Political Consultative Conference at the Great Hall of the People in Beijing, China, on March 13, 2015.
CHINESE REGIME

‘The Gang of Fudan’ Behind Xi Jinping’s Anti-America Narrative

The Chinese idiom “everything under the sky submits to the one ruler” has been heavily stressed in recent years by Chinese regime media and Chinese leader Xi Jinping as he tries to build up his absolute authority with the help of several of his senior advisors, known as “The Gang of Fudan.”

The gang is headed by Wang Huning, a member of the Chinese Communist Party’s (CCP) top decision-making body, the Politburo Standing Committee. Wang is a former professor and dean of the law school at Fudan University. Known in China as “the state advisor for three dynasties,” Wang has been the advisor for three generations of CCP heads including Jiang Zemin, Hu Jintao, and Xi.

As the first secretary of the central secretariat of the CCP, Wang is in charge of ideology and propaganda and has played an important role in shaping Xi’s strategies and policies.

From there he started his political career as the Head of the Political Team of the CCP’s Central Policy Research Office in 1995 and climbed up the ranks fairly smoothly.

In 2017, Wang reached the pinnacle of his career when he was promoted to the Politburo Standing Committee. He invented the “Three Represents” for Jiang Zemin, the “Scientific Outlook on Development” for Hu Jintao, and the “Socialist Thought on Chinese Characteristics in the New Era” for Xi Jinping, which was written into the regime’s constitution.

As the head of the regime’s propaganda work, Wang depicted Xi as the only one to look up to for everything in China. However, Xi’s newly shaped philosophy of governance and diplomacy—from the U.S.-China trade war to the dealings of the CCP virus pandemic, to “wolf-warrior diplomacy,” an aggressive, brazen attitude adopted by the regime’s diplomats—has time and again made things worse for Xi.

Another important member of the “Gang of Fudan” is Zhang Weiwei, director of the China Institute of Fudan University.

On May 31, Xi presided over the Politburo of the CCP for a collective study. In China, the regime requires officials to gather for meetings to study Mao’s thoughts and now Xi’s thoughts. The study was on “Strengthening China’s International Communication Capacity” and Zhang was invited to give a lecture to the Politburo Standing Committee, for which he was called a “new teacher of the nation.”

Although the details of Zhang’s lecture have not been disclosed, the regime’s most prominent mouthpiece, Xinhua, published a report the following day and said that Xi stressed the importance of “telling the China story well,” and “strengthening China’s international communication capabilities,” while Zhang “gave a lecture on these issues and made work suggestions. The comrades of the Central Politburo listened carefully to his lecture and discussed it.”

On June 2, Zhang was interviewed in English by another regime mouthpiece, the People’s Daily, and “shared his insights on the misunderstanding and misperception of China in the West.”

On the same day, a number of Chinese language media outlets posted an article titled “Chinese Scholar Who Once Fought with CNN and BBC Is Invited to the Group Study Session of The Politburo Committee.” The article portrays Zhang as a great fighter who once gave “beautiful counterattacks” when CNN and BCC reporters raised sharp questions against the regime.

Zhang holds quite a few glittering titles, such as a member of the Council of National High-End Think Tanks, Senior Researcher at Shanghai Chunqiu Institute of Development Strategy, etc.

He is also a well-known “expert on disparaging the United States,” whose representative statements include “China is well-off, while 40 million people in the United States are living in poverty.”

Zhang also authored a book, “China’s War against the Pandemic,” in which he claimed that the pandemic was the catalyst for the world’s rapid tilt to the East, bringing the West down to its knees.

Another person who coined the “wolf-warrior diplomacy” theory for the CCP is Zheng Ruolin, a researcher at Fudan University’s China Institute and a contributor to the party media Wen Wei Po.

On May 10, Zheng told Chinese language media, Observer, that wolf-warrior diplomacy is far from enough if China wanted to win the war on public opinion. He said media and academics should get involved and called on the Chinese media to “assume the role of the main force” in the war on public opinion against the West, and most importantly, to “repeat, repeat, repeat.”

“A lie repeated a thousand times will really become the ‘truth,’” he openly stated.

Zheng also suggested fully supporting “international friends” who speak for the CCP,” such as buying the copyright of their books and introducing them to the world; we should give them some Chinese book awards and journalism awards; they should be invited to visit China; our universities should hire them as professors.”

Another member of the “Gang of Fudan” is Shen Yi, an associate professor in the Department of International Politics at Fudan University. He is very popular among the “little pinks” in China because of his outlandish comments on nationalist positions.

“Little pink” refers to a group of blindly patriotic young Chinese nationals who have been brainwashed by the CCP and cannot differentiate China from the CCP.

On May 1, the official social media account of the CCP’s Political and Legal Affairs Commission released a post titled “China lighting a fire vs. India lighting a fire,” which contrasted a picture of China launching a rocket with an image of Indians cremating bodies of those who died of the CCP virus pandemic.

Shen immediately took to social media to applaud the picture, saying it was a normal response to India’s “sultry cheapskate ways.”

Tang Qing, a columnist for The Epoch Times, said the “Gang of Fudan” has stirred up nationalism and superficially hailed Xi. But has also botched Sino-U.S. relations and actually pushed Xi into a predicament not seen in a century.

Shi Shan, a U.S.-based commentator on China issues, told The Epoch Times that Shanghai, where Fudan University is located, is the home of former CCP leader Jiang Zemin and his son Jiang Mianheng, who have had close ties with Fudan University.

According to Shi, Wang was directly promoted by Jiang Zemin. However, after many members of Jiang’s faction were purged by Xi, the internal power struggle between Jiang and Xi have become more intense. Wang, the core figure of the “Gang of Fudan” placed at Xi’s side by Jiang, is now in a precarious situation.

Guggy Dong, a Chinese scholar who once also studied at the School of Management of Fudan University, told The Epoch Times that as “the state advisor for three dynasties,” Wang actually played different roles in all three, “He was Jiang Zemin’s helper, he monitored Hu Jintao, and now, he is destroying Xi Jinping.”