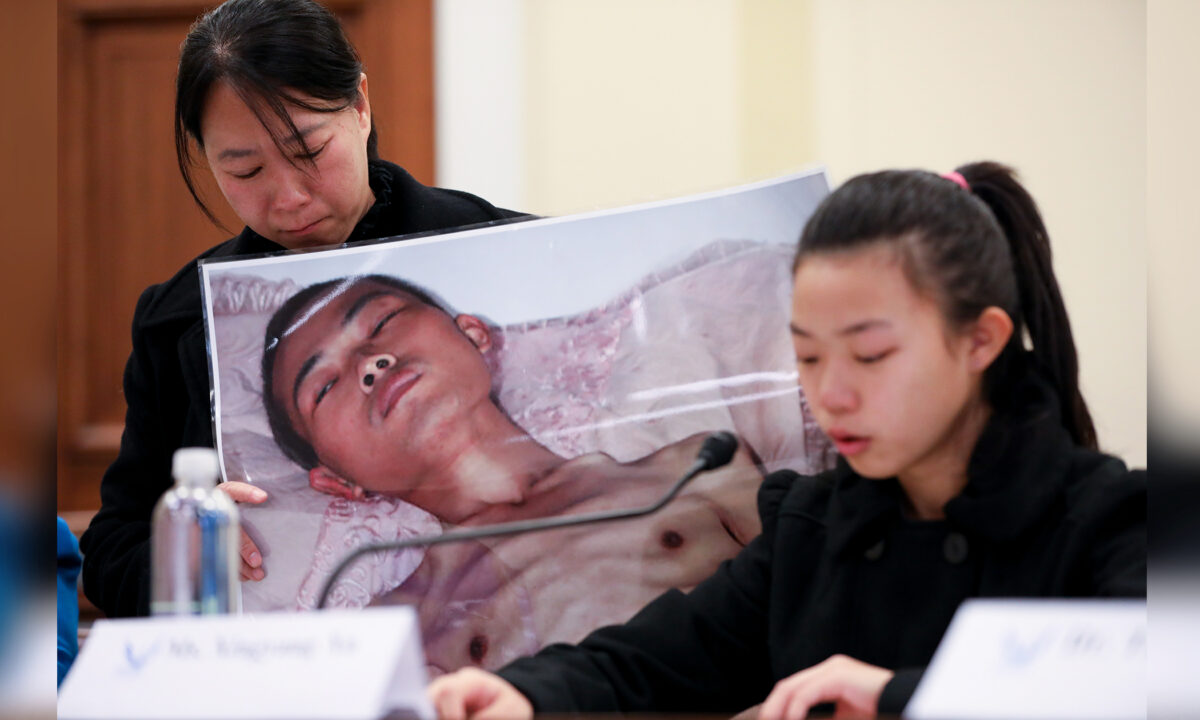 Xu Xinyang (R), whose father was persecuted to death for his belief in Falun Gong, speaks at the “Deteriorating Human Rights and Tuidang Movement in China” forum, next to her mother, Chi Lihua, at Congress in Washington on Dec. 4, 2018.
Strong, virtuous fathers are the foundations of close-knit families and a better world. While households the world over are preparing to celebrate Father’s Day, honoring their share of the protective fatherly love in their lives, let’s not forget the brave dads who are being persecuted in communist China, either for their faith or for defending human rights.

Here are some of these soul-stirring life stories—which will forever be listed in the darkest chapters of human history—revealing how communist ideologies are anti-divine, and a threat to humanity and world peace.

‘My Father Believes This Is God’s Message, and I Believe My Father’

It has been almost 1,770 days since the prominent Chinese human rights lawyer Gao Zhisheng went missing on Aug. 13, 2017. Gao has been nominated three times for the Nobel Peace Prize.

A devoted Christian and known as the “Conscience of China,” Gao was on good terms with the Chinese Communist Party (CCP) until he stood up to defend members of persecuted faith groups: Christian family churches and Falun Gong practitioners. He had been repeatedly arrested and tortured over the years and was formally arrested in 2006 after he wrote open letters to the top Chinese leadership condemning the suppression of faith.

When in prison, Gao was subjected to brutal torture, such as being shocked with electric batons, having his teeth knocked loose, and even having toothpicks stabbed into his genitals. Gao was under house arrest for years before suddenly disappearing on Aug. 13, 2017; the family hasn’t heard anything about him since.

Gao’s wife, Geng He, and his two children, who had faced constant harassment from the police, escaped to the United States in 2009 with the help of underground faith groups. Residing in a free country this past decade, Gao’s family has never stopped speaking out and worrying about his whereabouts.

His daughter, Grace Geng, believes that her dad’s book, the Chinese title of which translates to “Year 2017: Stand Up China,” has an unwavering message for the world—that the CCP will soon collapse. “My father believes this is God’s message, and I believe my father,” Grace said during the launch ceremony of the book in Hong Kong on June 16, 2016.

‘My Family is Just One Example Out of Thousands’

A 22-year-old student at Carleton University in Ottawa, Canada, has been advocating for his parents’ release. His father—a “rare talent” and renowned professional in the petroleum industry—was accused of sending informational text messages about the persecuted spiritual practice of Falun Gong via Bluetooth at a subway in Beijing.

Jack Zhiyuan Liu’s parents, both former engineers at the China National Petroleum Corporation, had faced imprisonment and persecution for their faith years ago. And on Nov. 19, 2021, they were arrested once again, according to Minghui.org—a U.S.-based website dedicated to reporting on the persecution of Falun Gong in China. His mother, Cao Wenbei, was released a month later, but his father, Liu Zhoubo, is still detained at Beijing No. 3 Detention Center.

“The CCP’s persecution of Falun Gong is destroying lives and families,” Jack told the Chinese edition of The Epoch Times. “What had happened to my family is just one example out of thousands.”

Falun Gong (also known as Falun Dafa) is an ancient self-cultivation discipline based on the principles of truthfulness, compassion, and forbearance. The atheistic communist regime has been violently persecuting the spiritual practice since July 1999. The CCP-led campaign of persecution that ensued 23 years ago has left numerous adherents detained, arrested, and subjected to extreme torture, including having their organs forcibly harvested for profit.

In the past, Jack’s parents, grandmother, and uncle had been imprisoned for 1 1/2 years for practicing Falun Gong. His father had also been sentenced to 9 years in prison before being released in 2010—a period that Jack described as “hell” for his father, as the elderly man was subjected to torture, starvation, and death threats in prison.

On Feb. 2, 2013, Jewher Ilham was supposed to accompany her father, Ilham Tohti, a Uyghur economics professor in China, to Indiana University for a month as a visiting scholar. However, when the Chinese authorities restricted her dad from leaving the country, she ended up taking a flight alone from Beijing to the United States.

That fateful day at the airport would become the last time she’d see her dad, to this day. Jewher’s father was arrested and later sentenced to life imprisonment on charges of inciting separatism—a charge that she said was unfounded. “He had never mentioned a word about separating the country,” Jewher told China Uncensored.

Jewher has been increasingly worrying about her dad since 2017—the year when the world came to know about the Xinjiang re-education and internment camps; her family in China had lost contact with her father that same year.

To seek her father’s release, the young daughter has been advocating for him.

“I have been trying to do anything that could possibly help my father and my community. I don’t know if it’s helping, I don’t know if anything would help. I just don’t want to regret,” she said.

Jewher had also met the then-President Donald Trump at the White House in July 2019, together with other survivors of religious persecution, and spoke at the UN General Assembly. In December 2019, she accepted the 2019 Sakharov Prize from the European Parliament on her father’s behalf for the defense of human rights.

‘I Dream One Day We Can Be Together Again’

A young Chinese refugee, Eric Jia, had a happy family, which became nonexistent the day his dad was arrested; he was only 3 years old at that time.

Eric’s father, Ye Jia, was also arrested for practicing Falun Gong. Like his father, Eric’s close relatives, including his grandmother and aunties, had also been arrested several times for the same reason and had been subjected to different forms of torture while imprisoned.

For instance, in April 2013, when Eric’s father was in jail for an eight-year sentence, guards tortured him by pouring pungent liquid into his nose while hanging him upside down; the guards refused to allow him to seek treatment when he vomited blood for months later.

“He was locked in a small room for six years, with two to three prison guards watching him every day,” he told The Epoch Times in a previous interview.

Eric’s father was last arrested in September 2017 and released three months later in December after Australian Greens Senator for Victoria Janet Rice sent a letter to the mayor of Xi’an, China, in November 2017, urging him to release Ye Jia “immediately and unconditionally.” Eric’s story mirrors that of many other overseas Chinese Falun Gong practitioners whose families are still being persecuted by the CCP in mainland China. Eric fled to Australia with his mother in 2012 and has been raising awareness of the persecution.

“There is nothing wrong to have faith in Falun Dafa. The CCP used all kinds of means to make us give up our beliefs,” Eric said to a crowd that had gathered at Martin Place in Sydney in 2018 to commemorate the lives lost at the hands of the CCP.

“I dream one day that they can be free and we can be together again.”

No Hope for Reunion

While many families are waiting anxiously for the day they can reunite with their fathers, for countless others, this reunion day would never arrive.

For instance, 20-year-old Xu Xinyang lost her dad in the brutal persecution.

“In my memory, most of my childhood was spent in fear and horror,” said Xu Xinyang at a forum on Dec. 4, 2018, on Capitol Hill to highlight the deteriorating human rights situation in China.

Xinyang’s parents, both Falun Gong practitioners, were arrested by the Chinese regime for printing materials to expose the persecution of their faith. Her father was sentenced to eight years in prison when her mother was pregnant with her. Xinyang’s father died 13 days after he was released.

Due to the brutality of the persecution, Xinyang never saw her dad until she was 8 years old, she told the audience at the forum.

“He wanted to hold me, but I was scared and hid behind my mom. I refused to let him hold me because I never had a chance to know him,” she said. “This became my lifelong regret.”

Even after her father was persecuted to death, Xinyang and her mother were not spared. The police even arrested her school principal and some of her teachers, all of whom were Falun Gong practitioners. Xinyang was wanted by the police. Fortunately, she managed to flee to Thailand with her mother when she was 12 and arrived in the United States in 2017.