Further to this post and “Comments” (very relevant to Terry Glavin’s article below),

COVID-19: The Chicoms and Canada, Australia and Sweden

Mr Glavin (tweets here) does a very nice number on our prime minister and his Liberal government: 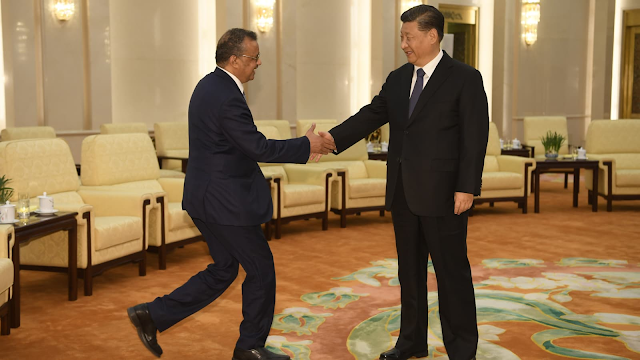 Tedros Adhanom, director general of the World Health Organization, shakes hands with Chinese President Xi jinping before a meeting at the Great Hall of the People in Beijing, China, January 28, 2020.

There is a reasonably plausible hypothesis making the rounds that accounts for Canada’s strange distinction among the world’s leading democracies as the silent outlier, the one government that isn’t either demanding or providing a proper explanation about how it came to pass, exactly, that a virus outbreak that began in China managed to go on to kill more than 250,000 people around the world, among them more than 4,000 Canadians.

Afraid of Beijing, which has already wreaked havoc with Canada’s agricultural exports and kidnapped Michael Kovrig and Michael Spavor over the detention of Huawei chief financial officer Meng Wanzhou, and which may yet choose to hold to ransom the Personal Protective Equipment supplies Canada’s front-line medical workers require as they risk their lives treating the country’s COVID-19 victims.

Afraid of jeopardizing Trudeau’s vanity-project hopes for a non-voting [actually voting but no veto unlike five permanent members and two-year term] seat on the United Nations Security Council by standing up to the World Health Organization, which has been conclusively shown to have collaborated with Beijing’s obfuscations and disinformation from the moment SARS-CoV-2 erupted in the city of Wuhan and the province of Hubei last December.

Afraid that Health Minister Patty Hajdu’s weird international role as one of China’s chief apologists in this whole sordid mess – to say nothing of his own government’s various and successively contradictory WHO-complaint rationales and excuses for being one of the last countries in the northern hemisphere to maintain an open-border policy – will make Prime Minister Trudeau look rather unforgivably shabby, even with all the benefit that hindsight should reasonably allow.

Whatever the explanation, there is bipartisan consensus in the United States that the WHO’s conduct and its failure to play any effective role in containing the global pandemic should be subjected to an independent review. Australia has been leading that charge, and has refused to back down even while Beijing has responded with threats to retaliate against Australian beef and wine exports [emphasis added].

The German, Polish and Netherlands governments have sternly rebuked Beijing for its bullying and its threats to withhold “aid” contributions in the form of medical equipment. British Foreign Secretary Dominic Raab has said the United Kingdom will want a thorough investigation into the matter of how the novel coronavirus spread like wildfire from Wuhan.

This week, the European Union’s 27 member states joined Australia’s call for an independent international investigation into the origins of the virus and its spread around the world. The EU has announced that it intends to co-sponsor a resolution calling for an independent review when the World Health Assembly meets on May 18 [emphasis added]. The Assembly is ostensibly the governing body of the WHO, which is one of 16 key agencies of the United Nations.

Beijing has made it plain that supreme ruler Xi Jinping is dead set against the idea of an independent inquiry, and the WHO itself has been trying to contain the uproars by enlisting UN member states to back an internal WHO review instead. On April 20, International Development Minister Karina Gould told WHO head Tedros Adhanom Ghebreyesus that his plan for a “post-crisis after-action review” has Canada’s support.

Meanwhile, the WHO continues to stymie efforts by the House of Commons health committee to question Bruce Aylward, the senior WHO official who led the WHO’s expert group mission to China following the outbreak in Wuhan. And the Global Times, the Chinese Communist Party’s primary English-language propaganda sheet, has blasted the Commons committee for engaging in a “travesty of WHO-bashing [emphasis added].”..

The federal government lodged no protest with China’s ambassador, Cong Peiwu, over the Global Times commentary about the health committee’s requests. Neither did Ottawa protest when Beijing’s propagandists launched a libelous attack on Canada’s Macdonald-Laurier Institute for having co-sponsored an open letter to the Chinese people criticizing Beijing’s cover-up of the coronavirus outbreak in its initial phase [the letter is here].

However, in recent weeks Chinese ambassadors have been summoned and hauled on the carpet in the United States, France, the African Union, Kenya, Uganda, Nigera and Kazakhstan for uttering threats and trafficking in conspiracy theories – the party line in Beijing is still to deny that the coronavirus even has a Chinese origin. Instead, Canada has gone so far as to laud China’s conduct in its handling of the outbreak, and in turn the Trudeau government has been praised by Chinese diplomats and by a variety of the Chinese Communist Party’s propaganda platforms [emphasis added].

Even after the Australian Telegraph reported [the story is here] that the Five Eyes intelligence consortium (the U.S., the U.K., Canada, Australia and New Zealand) had produced a research dossier describing an “assault on international transparency” in Chinese officials’ destruction and suppression of evidence related to the coronavirus outbreak, leading to the deaths of tens of thousands of people, Trudeau opted for a feeble response. Canada has no opinion on whether the virus escaped from a laboratory – a speculation highlighted in the dossier – and in any case cabinet relies not only on the Five Eyes agencies for intelligence, but other “partners” as well, Trudeau said, whoever they might be.

As for why the Canadian government persists in its strangely obsequious fealty to the Peoples’ Republic of China, one way Canadians might get some straight answers is if the House of Commons’ public safety and security committee starts looking into it. That’s what committee chair John McKay wants. And McKay is a Liberal.

For now, Beijing and Canada’s federal government carry on in their own duet: we’re all in this together, we mustn’t play the blame game, now is not the time for finger-pointing. For now, then, the most plausible hypothesis is that the Trudeau government is afraid of something. The big question that remains is, afraid of what?