China is paving its 'belt and road' to British Columbia

China is paving its 'belt and road' to British Columbia 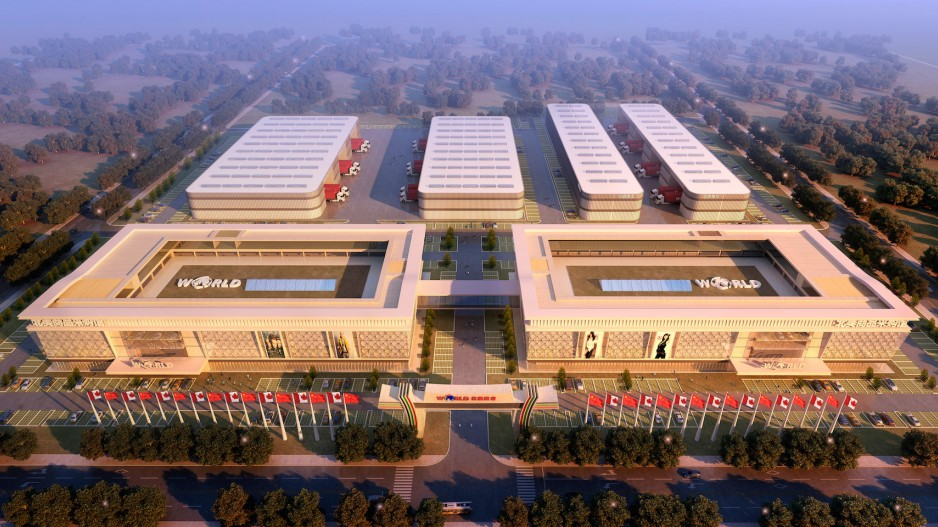 Renderings of a warehouse and trade centre now under construction in Surrey. The World Commodity Trade Centre has the backing of the Chinese Communist Party, as part of its Belt and Road Initiative, a global trade initiative of China. Photo by navcglobal.com
A major warehouse facility under construction in Surrey is not just paving the way for more trade between B.C. and China. It could be helping pave Chinese President Xi Jinping’s Belt and Road Initiative to Canada.

A major warehouse facility under construction in Surrey is not just paving the way for more trade between B.C. and China. It will pave Chinese President Xi Jinping’s Belt and Road Initiative to Canada.

The massive $190 million, 470,000-square-foot complex, dubbed the “World Commodity Trade Center,” is a joint venture between a Chinese state-sponsored company and a local development firm. The centre, first conceived in Beijing, has four warehouses and two large exhibition halls — to be lined with Chinese and Canadian flags — strategically located in the Campbell Heights industrial zone between Vancouver International Airport and the United States border.

The centre’s proponents say it will facilitate the packaging, processing and storage of outgoing Canadian commodities and incoming Chinese products, to be showcased at exhibition hall events and trade conferences — all driven by an e-commerce trade model. Its detractors believe it is the thin edge of the wedge in facilitating a stronger presence of Beijing-directed business in the region.

A trailblazing memorandum of understanding (MOU) on the Belt and Road Initiative (BRI) between the B.C. government and Guangdong province in 2016 precedes the project. This MOU, signed by former BC Liberal Premier Christy Clark, is the only such one in North America. Most Western jurisdictions have been apprehensive of Xi’s aspirations of emboldening China’s national and economic interests on a global scale, via the BRI’s foreign infrastructure investments and overseas financial, social and cultural programs, which initially targeted developing Asian countries.

Ground broke on the facility on October 7, 2018, with China’s consul general Xiaoling Tong taking centre stage, flanked by local politicians, development partners and associates of the United Front Work Department, a Chinese Communist Party (CCP) agency that political analysts say promotes China’s interests among Chinese diasporas, often by persuadinglocal Chinese organizations that may be sanctioned or supported by the department itself.

In interviews with political and trade experts, concerns have been raised over such foreign influence activities, as well as the potential cumulative impact of additional such trade facilities, which on their own do not meet the threshold for a federal government foreign investment review.

A prominent figure of the United Front in B.C. is leading the project.

Guo — who says he is a permanent resident of Canada, who splits his time between Beijing and Vancouver, where his family lives —markets the centre as a BRI project, however in an interview with Glacier Media, via a translator, he distances the project from Xi’s ambitious plan for global hegemony, first announced in 2013.

In November, 2014, Shing Kee and Pollyco signed a framework agreement on the centre at a Vancouver investment summit. In 2015 Shing Kee took part in an agricultural trade conference with B.C. and Canadian agriculture and trade officials in attendance.

Guo envisions Canadian food producers as key warehouse tenants. The Surrey facility, he said, will lease space to small- to medium-sized Canadian businesses and “offer them entry to the Chinese market.”

Guo said the market would dictate what comes back to Canada, suggesting at this time Chinese-manufactured personal protective equipment could be a hot import upon opening. (Following the COVID-19 pandemic, Xi announced intentions of a China-led “health silk road,” as part of the increasingly broad BRI mandate.)

Guo confirmed associations such as AFROC require approval from the Chinese government and “to join the association will certainly bring opportunities.”

But he said he is not a member of the CCP and the party “does not tell [him] what to say or not to say,” despite his standing in the organization. Rather, his sole focus is on improving his business, and that means increasing trade.

However, Guo evokes Chinese nationalist rhetoric espoused by Xi, when speaking about the trade centre, which his company asserts is to serve the Yanjiao “mother centre.”

When asked why it is important for his company to focus on the BRI and purported CCP achievements, Guo said, “It’s just to follow the local rules because in China you have to show this type of picture and play by the rules.

And, “How the government views this [trade centre] plan is not up to us,” added Guo, who met with China’s Consul General Tong Xiaoling in Vancouver to discuss the BRI in February 2018, according to the consulate’s website.

Former ambassador to China Guy Saint-Jacques says while many development proposals in China may provide more rhetoric than substance, it is clear this one has some degree of support from the Chinese government — although time will tell whether or not Yanjiao is a “pie in the sky.”

Regardless, he said CCP-sponsored activity in Canada requires a closer examination.

“We should be worried about the activities of the United Front,” said Saint-Jacques.

Of some concern is the degree to which local projects, such as the trade centre, may be controlled in a manner to favour China’s interests over Canada’s, said both Saint-Jacques and Burton.

“I would be interested to look at the contracts the Canadian companies will be asked to sign. If the Chinese are forcing to sign long-term exclusive rights, then I’d be concerned. Companies should learn from the ongoing crisis from China they need to diversify their markets.

“I would be concerned if these guys are saying, for instance, we will become your exclusive exporter to China for your cherries, for example,” said Saint-Jacques.

Pollyco’s manager Hugh Carter told Glacier Media in an interview his company is tasked with marketing the development whereas Shing Kee brings “users who fit into the trading centre.”

But Carter said while the company was aware the trade centre was billed back in China as a BRI project, it is his understanding any Canadian business may lease warehouse space and exporting products to China is not a requirement.

If that is the case, Saint-Jacques said there’s little to worry about with this project specifically.

“Unless this facility offers some kind of advantage or premium for shippers to use it [to export to China], I don’t think this will be significant,” he said.

Burton said he would be particularly worried if Chinese companies bought or built several such facilities in the Lower Mainland.

“That would give China an advantage in sourcing goods to put [Canadian companies] in a position where we couldn’t diversify to other competitors. Arguably, the whole BRI is about re-orienting the global economy to China, because all the belts and roads go to China. No belts and roads go other places,” said Burton.

This could be done without any Canadian government oversight. And so, a failure to understand China’s cumulative impact on commerce in Canada can jeopardize Canadian interests, Burton asserted.

Part of the BRI strategy, said Burton, “involves keeping under the thresholds for government regulation.

“In other words, several projects involving the same investment that put together would cross the threshold for government examination of national security implications. I think that’s part of the strategy,” Burton added.

Presently, Canada has certain federal thresholds for foreign investment reviews: For a member of the World Trade Organization, such as China, any state-owned investment over $428 million requires a review. And the review for the private sector is $1.075 billion — far above the Campbell Heights project, which is larger than Amazon’s regional warehouse in South Delta.

Saint-Jacques is calling on the Canadian government to update its China engagement strategy, which should take a full look at China’s existing assets in Canada and include plans to diversify trade away from the authoritarian regime.

“This review will make sure we aren’t getting into any situation where national security would be at risk,” he said.

That’s why all foreign investment should be tracked, even at the local government level, said RWR analyst Claire Chu.

“Being aware of the money flowing in and out of their territory — I think that’s really important,” said Chu.

Chu said United Front activity can be a harbinger for China’s BRI objectives since these CCP-backed groups play a key role in business arrangements at the local government level.

“That’s increasingly a way China is influencing people from the bottom up and also getting into projects without having to wrangle with the central government,” said Chu, who describes a “huge network” of business people, community leaders and students.

“This is not to cast a wide net of suspicion on a group of people, rather to explain that a lot of friendship associations will receive funding from these United Front organizations. It doesn’t mean they’re working for the [Chinese] government, but it does mean they’re more susceptible to government influence, government ideas and participating in government projects,” said Chu.

A tough critic of the CCP, Burton describes a muzzling effect on Canadian citizens and companies.

In turn, the local Canadian companies involved with such Chinese companies would likely need to fall in line with China’s interests, Burton asserted.

“None of the representatives in the (Canadian) companies would be likely to express concern, say, over the national security law related to Hong Kong even though they could well have strong Hong Kong connections and strong feelings …anyone who articulates such a position would likely lose the opportunity to engage in the economic benefits of a project because the Chinese partners would know if they co-operated with people seen as unfriendly to the Chinese regime, then they would suffer in their ability to function,” explained Burton.

Canada lacks foreign influence laws to register and regulate groups acting in the interest of foreign states, noted Burton at a February 24 meeting for the House of Commons Special Committee on Canada-China Relations.

“Australia’s 2018 Foreign Influence Transparency Scheme Act should be examined carefully by this Committee. Canada needs to come to terms with Chinese money benefiting Canadian political campaigns and rewarding Canadian politicians and public servants who are seen as ‘friends of China,’” said Burton.

The National Security and Intelligence Committee of Parliamentarians 2019 annual report spells out much of the concern over CCP activity in Canada.

British Columbia’s foray into China’s Belt and Road Initiative began with senior provincial politicians — namely then International Trade Minister Teresa Wat and Premier Christy Clark — hosting their “sister province” counterparts from Guangdong, including some senior CCP officials, at the May 2016 China-Canada Economic and Trade Cooperation Conference — One Belt One Road Initiative Workshop, held in Vancouver. Clark told the conference she looked forward to “building a one road, one belt policy between our two countries our two provinces.”

The objective of the MOU, stated internal memos from B.C. government staff, “is to strengthen cooperation between the provinces to jointly examine mutually beneficial opportunities presented by China’s One Belt One Road Initiative and British Columbia’s Pacific Gateway Strategy: to enhance maritime connectivity and expand two-way investment and trade in goods and services from energy and natural resources to value added products, professional services, international education and tourism.”