Hong Kong police added another prisoner to the growing list of people being arrested under the new Beijing-imposed national security law. On the same day that the first protester to be sentenced received a 9 year prison sentence, another man was arrested in Hong Kong for allegedly booing during the Chinese national anthem during a live screening of an Olympic event. 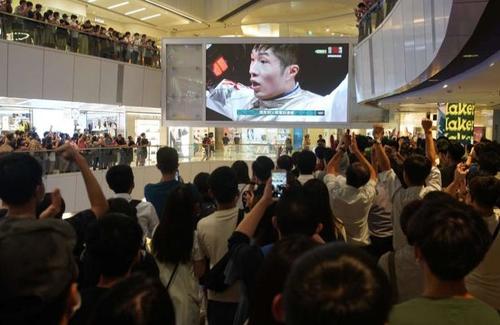 A group of people were reportedly watching Chinese Olympic fencer Edgar Cheung Ka-long receive his gold medal when the individual, identified as a reporter for the activist news organization Freeman Express, started booing the anthem. He was later arrested in Kwai Chung at about 1300 local time on Friday. He was still being held for questioning and hadn't yet been officially charged by the end of the day, according to the South China Morning Post.Unmute

olunteers" is illegal under the national security law passed last year by Beijing, which explicitly outlaws "any misuse" of the song.

Apparently, the suspect isn't the only one who has been booing at the anthem. According to police, they have been investigating "an outbreak of boos and jeers" during the playing of the national anthem. HK police have even infiltrated crowds of people watching Olympic events to try and catch anybody who audibly protests to China's supremacy.

Now, just imagine what the police would do if somebody dared to take a knee.