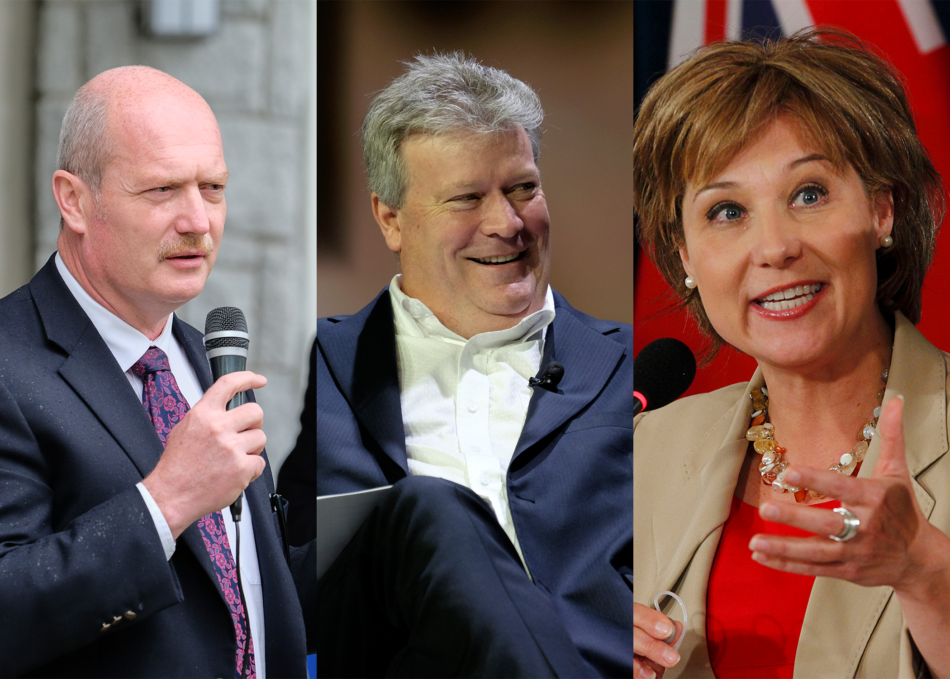 Over the last month, former B.C. Premier Christy Clark and former Ministers Mike De Jong and Rich Coleman have spoken at hearings with the Cullen Commission, a team investigating the systemic reasons behind the rise of money laundering in B.C. casinos over the past two decades.

She testified to answer the Commission’s inquiry into how much she knew about the increasing amount of suspected drug cash going into B.C. casinos if she recognized the money was increasing government revenue, and if she made any attempts to intervene.

Throughout her testimony, Clark said her government acted quickly during her time in office. They placed a report titled Province Strengthening Anti-Money Laundering at Casinos in 2011 that suggested changes to anti-money laundering strategies, including creating a task force investigating suspicious activities and transactions at B.C. casinos.

“The idea was never to try and get revenue at the expense of public safety or public confidence in our casino system. Stopping crime, money laundering, was always a primary concern way over and above the revenue that came from B.C. lotteries,” said Clark.

However, the former head of the RCMP Integrated Proceeds of Crime Unit, Barry Baxter said there was no political will to stop the money flowing into the casinos.

On April 8, Baxter told the Cullen Commission that when he took command in 2010, he didn’t doubt that organized crime groups were laundering money through casinos.

In 2013, the unit was split up, and the casino money laundering investigation was dropped, and the RCMP’s priority shifted to addressing terrorism and national security.

“The ability to move those large amounts of cash into the casino remained right up until the day I left and I know it continues on,” said Baxter. “The casinos run on profits, and provincially those profits generate revenue for the province because they’re here, and I just don’t think that BCLC agreed that this was money laundering.”

From 2013 to 2017, De Jong was the minister responsible for gaming. De Jong told the Commission on April 23 that generating higher gaming profits at the British Columbia Lottery Corporation didn’t place priority on concerns of money laundering at casinos.

De Jong said serious efforts were made to understand and address the issue of money laundering and that he was unaware of times where people failed to interfere.

He said he realized the severity of the issue in 2015 when large amounts of cash were seen moving through casinos and knew more needed to be done to address the issue. Government documents showed that between 2014 and 2015, more than $176 million was laundered through B.C. casinos.

Former Liberal solicitor general Rich Coleman spoke at a hearing on Wednesday. He was responsible for gaming on and off from 2001 to 2013. Coleman said he never asked for the job and his portfolio kept following him around.

During Coleman’s four-hour testimony, he said when he came to office in 2001, money laundering wasn’t considered a major issue, as loan sharks and vehicle thefts in parking lots were top concerns for the province.

“I never saw any attitude within the government that you need to let questionable money flow into any aspect of government,” Coleman said to Brock Martland, a member of the Commission.

B.C. gave the Commission an extension in March to complete its final report, which is now due on Dec. 15.

The issue of large cash transactions at B.C. casinos didn’t ever come up in Rich Coleman’s first five years as minister in charge of gaming, he testified Wednesday to the Cullen Commission’s money laundering inquiry.

Coleman was the MLA for Fort Langley-Aldergrove or Langley East from 1996 to 2020, and during the years the Liberals controlled the B.C. Legislature from 2001 to 2017, he was the cabinet minister in charge of gaming multiple times, including from 2001 to 2005.

Coleman described the previous regulations and system as one that was largely operated by small local charities with a few casinos. His ministry created new legislation that professionalized the industry, and before long, attracted new casinos such as the River Rock in Richmond, still the largest casino in the province.

“There’s no doubt that once you modernized, the revenue did go up from casinos,” Coleman noted.

Brock Martland, a lawyer working for the Cullen Commission, asked if the changes were made to generate money for the government, but Coleman said it was meant to modernize and strengthen a weak and dysfunctional gaming system.

“There was never a discussion that we needed to do this for money,” he said.

The primary focus in the early years for enforcement around gaming in B.C. was illegal slot machines in bars and pubs, and loan sharking and general theft around the outsides of legal casinos, along with some concern about illegal gambling such as poker games, Coleman testified.

“None of the large cash transaction piece was ever brought to my attention,” Coleman said, referring to the reports that huge volumes of cash, sometimes hundreds of thousands of dollars, was sometimes brought into B.C. casinos and converted into chips.

By 2008 to 2010, there were beginning to be questions from inside investigators and whistleblowers and, later, from the media about the big cash transactions.

Coleman was asked whether he recalled a 2008 meeting with Gaming Policy and Enforcement Branch senior members in which he was allegedly told that the cash issue was keeping one senior official up at night.

Despite the alleged concerns raised, the Illegal Gaming Enforcement Team (IGET), a five-year pilot project, was disbanded in 2009, under Coleman’s directive.

“It wasn’t that successful, it had trouble with focus,” Coleman said.

He noted that earlier that year, the government had announced the hiring of 168 new officers and 10 dedicated Crown prosecutors to go after guns and gangs.

The thought was that those new officers and prosecutors would pick up the slack from the disbanded IGET, which was about to lose its funding from BCLC.

He was also asked about an email that was sent to him in 2010, apparently by staff at the Edgewater Casino, that said there was a “see no evil hear no evil mentality,” there, with management ignoring loan sharking.

Coleman said he wouldn’t have responded to an email like that other than by passing it along to investigators, as there could have been an active investigation already.

Asked about the large amounts of cash, Coleman said that the difficulty was always proving which of it was illicit, criminal cash and what was legitimate.

One “issues document” – a briefing document given to cabinet ministers for use during budget debates – said in 2012 that patrons were asked for ID if they tried to bring in more than $9,000 in cash and had to give a “valid occupation.”

Other similar issue documents boasted that the province had a “robust anti-money-laundering regime in place.”

Coleman was asked if that was accurate, or if there was a component of “spin” in those documents.

“My assessment would be that it’s pretty accurate,” he said.

One way the government prevented money laundering in casinos was by simply giving back the same cash that had been deposited when large transfers were cashed out, Coleman said, which meant no laundering occurred.

However, media reports a decade ago indicated in at least one case casino staff provided a letter certifying that a six-figure sum of cash was legitimate casino winnings for at least one gambler.

In general, Coleman said he had to leave investigations to police and remain at arms length as minister in charge of gaming. He said he didn’t recall police ever specifically expressing concerns over resources to investigate such issues.

The Cullen Commission was formed in the wake of reports of huge amounts of illicit cash moving through B.C. casinos with few attempts to investigate the source of any of the funds.

An inquiry launched by the NDP outlined how illegal cash from organized crime was flowing through casinos, as well as the real estate and luxury car markets in Metro Vancouver.

Last November, Fred Pinnock, who was in charge of the now-defunct IGET, told the commission that he met with then-solicitor general Kash Heed, who is also a former officer he knew through policing circles for 35 years.

Pinnock said Heed told him that his concerns about illegal activities were legitimate but Rich Coleman, who was the gaming minister, was “all about the money.”

Coleman flatly denied that twice during his testimony.

He also said that an allegation Pinnock made about a crushing handshake delivered by Coleman during an encounter at a Liberal fundraiser “never happened.”

Pinnock was later grilled about his testimony by a lawyer for Heed, who suggested Pinnock’s memory of events was faulty.

Coleman has told the Langley Advance Times that he is confident the then-Liberal government did a good job with gaming during their tenure.

The hearings are overseen by Commissioner Austin Cullen, a B.C. Supreme Court judge.

Last week’s testimonies in Cullen Commission’s public inquiry into money laundering has heard testament from former B.C. cabinet minister Kash Heed. He addressed the recordings of him channeling serious assertions regarding former gaming minister Rich Coleman as just an opinion rather than based on facts. In 2018, Mr. Heed was recorded saying that RCMP officials were puppets in the hands of the then minister Coleman. Mr. Heed has been the latest political figure to give testimony last week at the public inquiry. The commission has been tasked with determining whether the alleged money laundering activities in the province’s casino properties have occurred and whether they continue to this day. Headed by Justice Austin Cullen the inquiry has a December 15 deadline date to compile its final report on the matter. Mr. Heed has commented on the recorded phone call between him and his friend Fred Pinnock who is an ex RCMP officer and once led the Integrated Illegal Gaming Enforcement Team. The former minister stated that the conversation was meant to be private between two friends and his assertions were based on his personal opinion and not on first-hand knowledge or experience.

Both are friends since the early ‘80s, and last November Mr. Pinnock stated that in 2009 Mr. Heed claimed that Mr. Coleman has a major part in the inability to deal with money laundering and that senior RCMP operatives are also to blame. However, the former did not record the meeting in question but stated that he taped three conversations with Mr. Heed in 2018.

According to one of the recordings, the former minister was heard describing the former local government as “the most unethical group of people you can imagine”. Mr. Heed responded to the tape by claiming that his remarks were entirely based on rumors and media reports he had seen after leaving the solicitor general’s office.

The former minister has also claimed he being recorded without his consent was morally repulsive and that there is a huge difference in what he said in the 2018 phone calls and the 2009 meeting with Mr. Pinnock. The former minister insisted that the assertions were just part of a conversation with a friend and it was his personal opinion rather than facts.

Previous testimonies saw Mr. Coleman giving testament himself. The former British Columbia denied that the province’s government has put higher revenue numbers ahead of dealing with the money washing issue. He claimed that he never heard or saw someone suggesting to allow the issue to continue for the benefit of the government. He has also claimed that back then he did not possess enough authority to order what and when should be investigated.

Prior to that, Attorney General David Eby has also testified at the public money laundering inquiry. He stated that the British Columbia Lottery Corporation and its regulator the GPEB had a major difference in the information that they were reporting to him. Mr. Eby also claimed that the Crown agency was offered some precautionary measures by the branch, but it was unwilling to adopt them for quite a while.