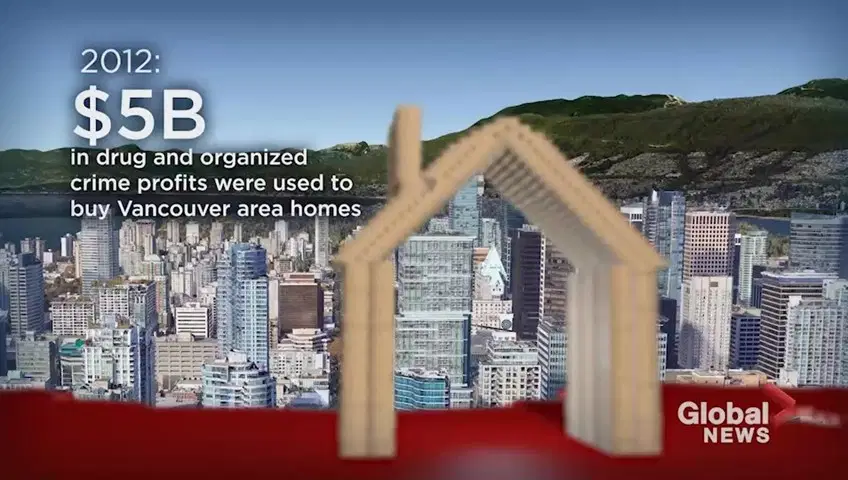 Real estate prices have soared in Vancouver in recent years, in part because of the use of laundered money to buy high-end real estate.

The laundering scheme is so infamous that investigators call it the “Vancouver model.”

The Triads, China’s organized crime syndicate, created a pipeline that laundered $4 billion in illegal drug profits last year through real estate and other investments in Vancouver, British Columbia. The conspiracy, news of which has scandalized the province’s largest city, starts in China, where precursor drugs used to manufacture the deadly opioid fentanyl are shipped to the Port of Vancouver and sold on the streets by drug dealers. The dealers drop the money off with Chinese gamblers who launder it by purchasing betting chips at high-roller tables in the city’s casinos and cashing them out. They then deposit the “washed” money into underground banks that wire the funds back to the Triads in China.

Thereafter, the funds are transferred to shell companies – protected by Canadian privacy laws – and used to buy luxury homes and expensive cars in Vancouver. In 2018, the Triads laundered $5.4 billion ($7.4 billion Canadian) in the city, according to provincial government figures. Of that, the criminals invested $4 billion in real estate alone, which has increased the cost of homes in Vancouver by five percent. The bubble in prices is so large that the city’s residents complain they no longer can afford to buy a home.

David Eby, British Columbia’s attorney general, uncovered a great number of cases of real estate bought thanks to laundered money, going back years. A person claiming to be a student purchased 15 condominiums in one building in Vancouver in 2001 for $2.1 million, and the units would sell today for $8.1 million. A woman dubbed a “homemaker” paid $3 million for 12 houses in the city’s downtown from 2004 to 2007, and those are now worth $11 million.

The revelations came from two reports based on government studies released in May by British Columbia to examine the extent of money laundering there. One of the studies, announced by former provincial attorney general Maureen Maloney, determined that the problem is nationwide – organized crime washed an estimated $34.8 billion within Canada in 2018. More of it came through Canada’s Ontario, Alberta and Prairie provinces than in British Columbia.

The source of the drug money that starts the Triads’ laundering process is Guangdong, China’s most populous and richest province (with more resident billionaires than anywhere in the country) located along the South China Sea. Near the financial center of Hong Kong and China’s casino capital of Macau, Guangdong is ripe for exchanging money overseas. It’s also the location of chemical factories that manufacture the synthetic opioid fentanyl and chemical precursors used to make the dangerous and addictive drug.

The narcotics are smuggled from Guangdong to Vancouver by the Triads, who have had a foothold in Vancouver since the 1990s. One method of hiding drug money is to transmit it to an offshore bank. A Triad member obtains a “legitimate” loan from the bank to buy real estate. A strawman or stand-in buyer then purchases a luxury home or condo at a much higher reported price than the one paid by the Triad member, who makes a bigger profit. In the process, real estate values in Vancouver are inflated.

Meanwhile, seizures of Chinese-made fentanyl by Canadian authorities increased by almost three times in 2016-2017 compared with 2014. In 2017, of the more than 1,400 people who died of drug overdoses in British Columbia, about eighty percent had used fentanyl by itself or mixed with other drugs.

So-called casino junket operators also facilitate the laundering of drug money in Vancouver. Junket operators lend money to high-rolling gamblers to purchase casino chips. The gamblers, in a classic money-laundering ruse, “wash” these loans by cashing in the chips and using the money to acquire expensive housing.

According to Eby, casinos in British Columbia permit hoodlums to bring in hockey bags full of hundreds of thousands of Canadian dollars from the sale of synthetic opioids and buy casino chips. Nothing happens to them.

Further, sellers of high-end automobiles in Vancouver have no incentive to report suspiciously large cash sales. Launderers will have strawmen buy the luxury cars and ship them off to China.

The players in the laundering plot in Vancouver are not just from China, according to Peter German, a former investigator for the Royal Canadian Mounted Police, who wrote one of the government reports on money laundering. “It is alarming to know that Greater Vancouver has also acted as a laundromat for mainland Chinese organized crime, all seeking a safe and effective locale in which to wash their proceeds of crime,” German wrote in his report, as quoted by The Canadian Press.