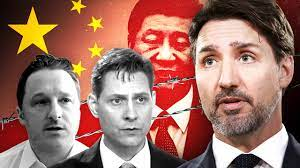 While the Chinese government continues to hold two Canadians as political prisoners, Canada has been sending millions in foreign aid to the Communist superpower.The information comes from an order paper question posed to the Liberal government by Conservative MP for Brantford—Brant, Phil .

With regard to Canada's relationship with the government of China since October 21, 2019, what is the total amount of official development assistance that has been provided to the People's Republic of China?

The response tabled by the government revealed that Global Affairs Canada has sent over $2.3 million in foreign aid to the People's Republic of China. The Quebec government topped up the amount with an additional $508,000 in scholarships to Chinese students.

As part of the funding dispersal, Environment and Climate Change Canada gave $850,000 as part of Canada's contribution to the China Council for International Cooperation on Environment and Development, an advisory body that works directly for the Chinese Communist Party and provides the Chinese government with policy recommendations.

The International Development Research Center provided $2,200 to China for the purposes of a study on gender and the future of work. Other grants from the IDRC included funding for school lunch programs in China.

Meanwhile, the Chinese government has been holding two Canadian citizens, Michael Spavor and Michael Kovrig, as political hostages. The two have been detained since December 2018 in response to the arrest of Huawei executive Meng Wenzhou at the Vancouver airport on an American warrant for fraud.

Within the same documents, Global Affairs acknowledges the enormous spending by China on both their military and empire-building efforts. Global Affairs estimates China's current annual military budget to be more than $276 billion USD.

The cost of China's imperialistic Belt and Road program was pegged at $1 trillion. That is the program where the Chinese government builds Chinese economic and social infrastructure to expand its footprint and influence around the world.

Conclusion: Justin Trudeau is giving it away as a form of submission.