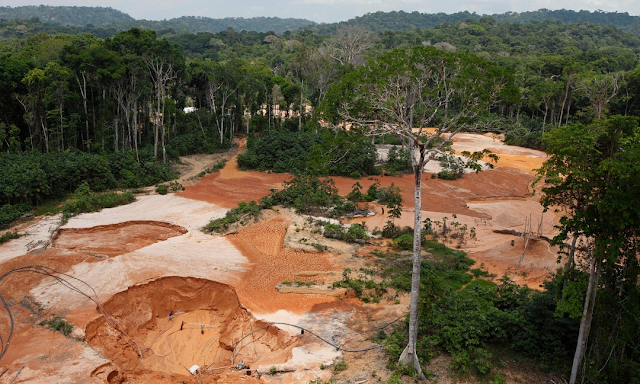 Bilateral meetings between Xi and Bolsonaro took place in the Great Hall of the People in Beijing on October 25, with a focus on trade and commercial cooperation. The pair signed a total of eight acts, including one committing to increased beef jerky exports from Brazil. But the environment seems to have been ignored, fueling concerns about China’s commitment to green development and growing threats to the Amazon rainforest. The growth of Brazilian exports to China — particularly beef, soy, and other agribusiness and mining commodities — could put the world’s largest remaining rainforest in jeopardy.

A single mention of the environment gave conservationists no comfort. It came at the Brazil-China Cooperation Forum on October 25, just hours before Bolsonaro’s meeting with China’s leader, when the Brazilian president thanked China for its support in the Amazon crisis.

“I want to say thank you for the words of China’s ambassador to Brazil, recognizing our sovereignty over the Amazon region,” Bolsonaro told a room full of prominent businessmen. “To the Chinese government, thank you. This public recognition is priceless.”

On August 23, Chinese Ambassador to Brazil Qu Yuhui had said that the Amazon crisis was a “bit fabricated.” High Chinese government officials have made no other statements.

In anticipation of Brazil’s diplomatic visit last week, and the upcoming BRICS (Brazil, Russia, India, China, and South Africa) emerging economies summit in Brasilia next month, expectations loomed over whether China would walk its green talk beyond the Asian nation’s borders. In a recent New York Times commentary, Heriberto Araújo called on China to use its leverage to end Amazon destruction. Araújo, author of “China’s Silent Army,” stated that the Bolsonaro-Xi visit presented a “perfect opportunity to show the world that [China] is truly committed” to combating global warming. Bolsonaro, like his hero Donald Trump, has shown disdain for the Climate Paris Agreement, which China supports.

As Brazil’s biggest trading partner, China is uniquely positioned to influence the Brazilian agribusiness sector and to help curb drastic reductions in environmental protections being carried out by the Bolsonaro administration. In 2018, Brazilian exports to China reached a record US$64 billion, a fourth of Brazil’s total exports.

This year’s Amazon fires (linked directly to deforestation occurring since Bolsonaro took office in January), and continued soaring deforestation rates through October 2019, have put the international community on alert. Brazil’s anti-environmental policies have ignited tensions with France and the G7, and raised alarms among international investors. Norway and Germany have cut millions in funding to Brazil’s environmental protection programs, including freezing of the Amazon Fund.

But for Oliver Stuenkel, an international relations expert from the Getúlio Vargas Foundation, it is “nonsensical” to expect pressure from China over environmental issues, given its long-term foreign policy of non-interference. “China has this power, but it is also clear China will not use this power,” he said. “China could also pressure North Korea and have a huge impact there in terms of human rights abuses — but they won’t. The idea of pressuring other countries is not aligned with the Chinese approach.”

China and Hong Kong accounted for 44 percent of all Brazilian beef exports in 2018. And data from Trase, a supply chain transparency initiative, shows that 42 percent of all Brazilian soy was exported to China between 2013 and 2017. Beef and soy are the main drivers of Amazon deforestation. Soy exports from Brazil to China may, however, drop this year as the Asian nation deals with the African Swine Fever that could cull as many as 200 million pigs by the end of the year (China’s animals are fed heavily on Brazilian soy).

Chinese officials have previously downplayed their role in contributing to Amazon deforestation. Foreign Ministry spokesperson Geng Shuang implied there was no correlation between the Amazon fires in August and Chinese imports of Brazilian beef.

But according to Trase director and sustainability expert Toby Gardner, data showing that correlation is “robust.” Any claim otherwise, he says, is “categorically wrong.”

Research shows that Chinese exports are responsible for at least 22,700 hectares of Brazilian deforestation, concentrated in the Matopiba region (that includes part of the Amazon rainforest biome as well as the Cerrado savanna biome), and presents an estimated 81 percent deforestation risk. The Trase study found that Matopiba soy (covering the states of Maranhão, Tocantins, Piauí and Bahia) accounts for 8 percent of all China’s soy imports from Brazil.

Despite Xi’s silence, some environmentalists are staking hopes that market pressures in China will create more sustainable supply chains. In recent years, China has made vocal commitments to becoming a greener, more sustainable nation. “China must take the lead in international cooperation on climate change to ensure the survival of mankind,” Xi said during his 2017 keynote speech at China’s Communist Party Congress.

Gardner believes there is hope for action by Chinese companies — many of which are government run. The flip side of Xi’s environmental silence, he says, is the sensitivity of Chinese companies to reputational harm and long-term reliability. “Bolsonaro should not take the fact that Xi is not saying anything as a sign that Chinese markets will not hold Brazilian agribusiness to account,” he said. “They stake a huge amount on their imaging.”

According to Gardner, China’s leading food trader and Brazil’s largest importer of soy, COFCO, has shown more interest in assuring an eco-friendly supply chain than commodities counterparts in the U.S. “We’ve done some work with COFCO and found they are far more into the details and committed to understanding what their supply chain actually is. Cargill, on the other hand, makes a lot of noise and does nothing,” he told Mongabay.

Jun Lyu, COFCO’s chairman, made ambitious statements on the environment at the World Economic Forum in Davos this January. “We can feed the world in a sustainable way, but we need to act now,” he said.

Stuenkel, however, remains skeptical. Chinese companies won’t risk commercial relations with other nations any time soon, he says, as it needs to feed more than one billion people. “China depends on Brazil because they are not self-sufficient with their food supply. They depend — and will always depend — on Brazil. Many young Chinese are paying attention to the environmental matrix of products, but this is still budding.”

Bolsonaro, who during his campaign was critical of China’s over-large influence in Brazil, has strongly pivoted in his position since taking office. The president has now apparently answered the question recently posed by the South China Morning Post: “China-basher or bridge builder?” Brazil seems intent now on building bridges to better business relations with China, and China seems similarly intent even if that means silence on the environment.