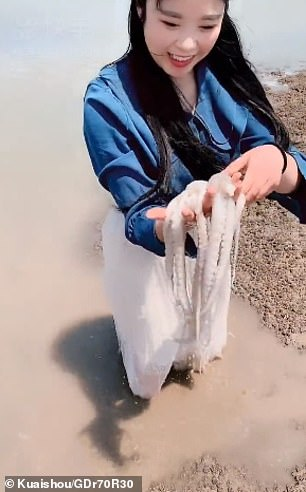 Recently a host of a live streaming host by the name ‘Seaside Girl Little Seven’ made a video that quickly became viral among netizens. This vlogger is quite often seen to post interesting clips of herself where she can be seen enjoying seafood cuisine from time to time. However this time she was attacked by an octopus.

The video that gained enormous views captured the vlogger being attacked by the octopus that she tries to eat alive. The woman posted the video in order to gain more popularity. As a result, she tries to do something different to get the attention of more people. Even though the clip did become viral on the internet, it was not for the reason that the woman wanted to.

The short clip was merely 50 seconds long. It was shared on the very popular short video platform named ‘Kuaishou’. The video shows ‘Seaside Girl Little Seven’ engaged in combat with an octopus as she tries to eat this 8 armed creature alive. On the other hand, the octopus tries to defend itself by sticking to her face with the help of its suckers.

Read Orangutan Stands Up To Heartless Machine Devastating His Home

The viewers who watched this popular video were completely awestruck and in shock at what they witnessed. While the octopus gradually takes over the face of the woman with the tentacles, the face of the vlogger becomes severely distorted in the process. Nonetheless, the marine animal gives in to the woman’s efforts and lets go of her face, at the end. 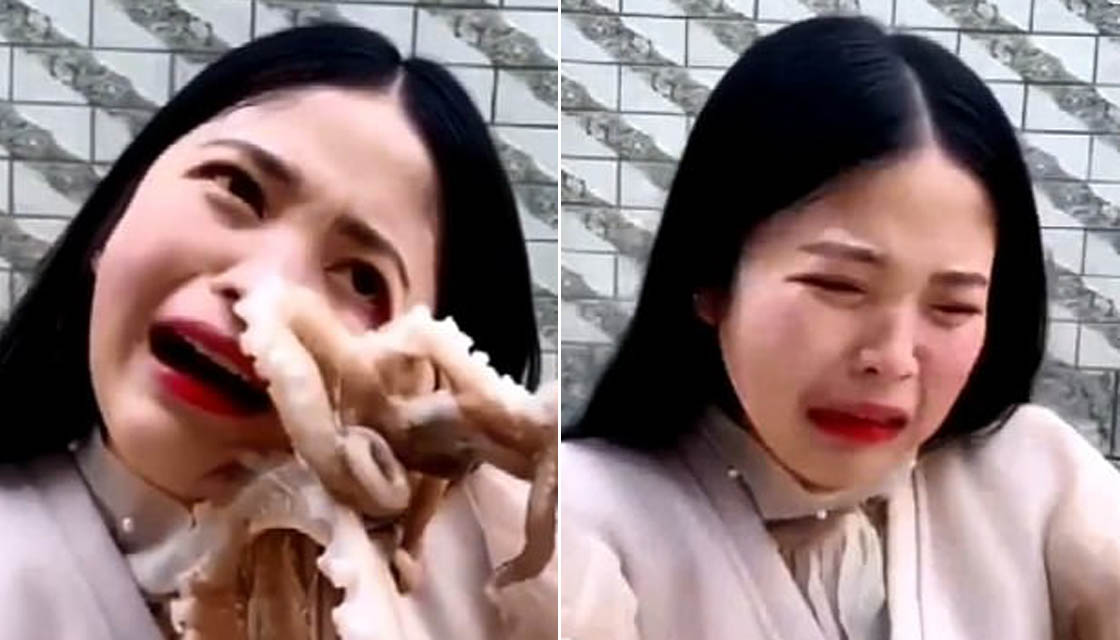 All this mainly took place due to the reason that the vlogger introduces a new challenge of eating an octopus alive. Eventually, the result of this video was nothing that she had intended it to be. Rather she was left bruised and in acute pain. The video she tried to make soon turned into a horror clipping as the viewers were scared by the shrieks of the woman in pain.

‘Seaside Girl Little Seven’ is known to live in the city called Lianyungang. Her followers are also aware that she loves to eat seafood. These details about her are easily known from her account on the Kuaishou site.

The vlogger began her live streaming channel almost 2 years ago. She has also recorded herself eating several different varieties of seafood that were deliciously cooked including lobsters and crayfish.

It is very surprising that the woman had started complaining that she has not been able to get as much attention as she wanted to in her short career as a vlogger. In one of her earlier clips, she even asks her followers what is the reason behind her videos not in the trending charts.

It is believed that she made this shocking video because she wanted to get enough viewership and popularity. She ends the video with the promise that she will certainly try to eat a living octopus in one of her next videos. In addition, she is also very happy that this octopus-eating challenge video has successfully managed to receive massive views and reach a wider audience. Moreover, the vlogger has also received some amount of stardom owing to this octopus challenge video.\