This sitting Labor MP has been cultivated by Chinese intelligence

This sitting Labor MP has been cultivated by Chinese intelligence

Chinese government intelligence operatives cultivated NSW Labor MP Ernest Wong in Australia and China, according to information gathered by Australian security agencies.
The clandestine operatives did not disclose their ties to Beijing’s intelligence apparatus when they targeted Mr Wong in his role as a politician and NSW community leader. It is understood Australian agencies have evidence of direct dealings between suspected Chinese government intelligence agents and Mr Wong.

A typical aim of intelligence operations is to gather information and gain access to networks using personal relationships and familiarity. Well placed sources say Mr Wong was likely targeted because he is able to open doors to more influential Labor party politicians.
However, there is no suggestion that Mr Wong has ever acted inappropriately or wittingly passed any information on.
There is also no suggestion that Mr Wong, a member of the NSW upper house, ever knew he was being cultivated or targeted by Beijing's agents, although sources aware of sensitive information gathered by national security agencies said he appeared to be the target of a long-term operation.
Mr Wong said he did not believe any meetings he has had with officials in Hong Kong or mainland China "over many years" had been designed to extract information from him. 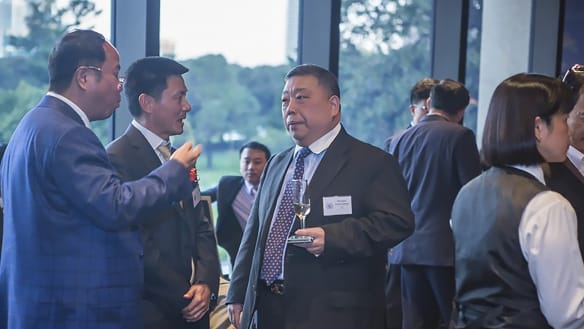 “No … definitely not in Hong Kong because that is my home country [but] it would be very difficult to identify,” Mr Wong said.
“During conversations, people have probably said ‘how do you think Australia is going’, or ‘how do you think Australia is going to deal with the relationship with China’ but that is a very generic discussion.”
Mr Wong said the “main curiosity was with the Labor Party”.
“People have asked what the Labor Party is all about, how they deal with the policy, that has been something that did come up, I have to say. But people want to know about the structure of the Labor party, of the left-wing, the right-wing,” Mr Wong said.

“Even if people did approach me about inside government stories, I won't be able to provide those insights because I am not an insider, I do not have those stories to tell.”
It is understood that figures connected to Chinese intelligence agencies met Mr Wong at community functions in Sydney and during his overseas trips to Hong Kong, Taiwan and mainland China.
The case is one of the very few confirmed recent instances in which foreign intelligence agencies have cultivated a serving Australian politician, although national security officials and experts and senior ALP figures have also suggested that former Senator Sam Dastyari was also targeted.
In January, ASIO deputy director-general Peter Vickery told a parliamentary hearing that the intelligence agency was concerned that spies were targeting serving Australian politicians.
"We have an example of where a person cultivated and recruited an Australian official, and we know that some of our foreign intelligence adversaries not only recruit Australian officials in a public service sense but also seek to recruit and cultivate public officials—in other words, politicians," he said.

Mr Vickery did not identify any overseas country as being responsible for the infiltration, although it is understood that activities in Australia by Chinese, Russian, South Korean and Israeli intelligence agents have all caused grave concern inside ASIO over the last few years. Beijing is understood to be the main player engaged in covert or coercive foreign interference operations in Australia via intelligence agencies and influence fronts controlled by the Ministry of State Security, Peoples' Liberation Army and the United Front Work Department.
In late September 2016, Labor leader Bill Shorten warned trusted colleagues that he had been personally briefed by ASIO chief Duncan Lewis about the risk that politicians were being targeted by Chinese Communist Party operatives.
A person subsequently briefed by Mr Shorten said he was warned of efforts to "cultivate" Labor figures.
The same source said this was a factor, among several, in the decision to dis-endorse Ernest Wong in the next election. The source said Mr Wong's poor handling of the safe schools issue at the last federal election and his ineffective parliamentary presence were also factors.
A spokesman for Mr Shorten would not confirm or deny that the Labor leader was warned about Mr Wong in one of his regular confidential briefings from intelligence officials.
The revelations come as the Turnbull government's controversial legislation to curb covert foreign interference and influence makes its way through Federal Parliament with the support of Labor. The two bills – amended under a bipartisan agreement and likely to be passed by the end of the week – will introduce tough penalties for espionage and interference and set up a register of organisations advancing the interests of foreign entities.
Speaking on the legislation this week, Liberal MP Andrew Hastie, chair of Parliament's intelligence and security committee, said authoritarian states were conducting operations to "influence, pressure, coerce, bribe, corrupt and exploit" Australia and other western countries, including through the targeting of "individuals and institutions abroad, usually members of the political system, to foster them as agents of influence in the service of their national objectives".
The affable Mr Wong was once welcomed into the Labor party due to his ability to raise millions of dollars in donations from wealthy Chinese community figures in Sydney. But Mr Wong's fundraising and Chinese community leadership also brought him in the orbit of organisations controlled by the secretive lobbying arm of the Chinese Communist Party, the United Front Work Department (UFWD).
Mr Wong travelled to Taiwan and served as a honorary advisor to the peak UFWD organisation in Australia, the Council for the Promotion of the Peaceful Reunification of China. Among the council's aims are to convince overseas Chinese and Australian politicians of the propriety of Beijing's claims to disputed territories, including the South China Sea.
Key NSW Labor leaders, such as Kaila Murnain, have given Mr Wong the cold shoulder since 2017, regarding him as a political liability and ineffective parliamentary performer. But Mr Wong was once feted by powerful figures from the NSW Right, including Sam Dastyari, because of his fundraising skills and perceived capacity to connect with Chinese-Australian voters.
Mr Wong was parachuted into the NSW Legislative Council in 2013 with the help of Mr Dastyari, who arranged for the former karaoke singer and local councillor to fill a vacancy created by the resignation of former Labor NSW Right powerbroker Eric Roozendaal. This deal has long fuelled intense speculation inside Labor, given that upon his exit from politics, Mr Roozendaal secured a job with a Chinese political donor who, as well as being one of Mr Wong's closest political backers, has deep ties to the UFWD.
Mr Wong, Mr Dastyari and Mr Roozendaal have previously dismissed claims of a quid quo pro, instead insisting that Mr Roozendaal had intended to leave parliament to seek a more lucrative career and that Mr Wong only filled his place because he was next in line on Labor's upper house ticket.
Mr Dastyari resigned from the Senate late last year after multiple revelations about his relationship with Chinese donors, including that he had tipped off one donor that his phone was being tapped by Western intelligence agencies.
Nick McKenzie is a leading investigative journalist. He's won Australia's top journalism award, the Walkley, seven times and covers politics, business, foreign affairs and defence, human rights issues, the criminal justice system and social affairs. nmckenzie@fairfaxmedia.com.au or +61 401877402
Alexandra Smith is the State Political Editor and a former Education Editor at the Sydney Morning Herald
Fergus Hunter is a political reporter for Fairfax Media, based in Parliament House.
Posted by Conan Doyle at 7:59 AM