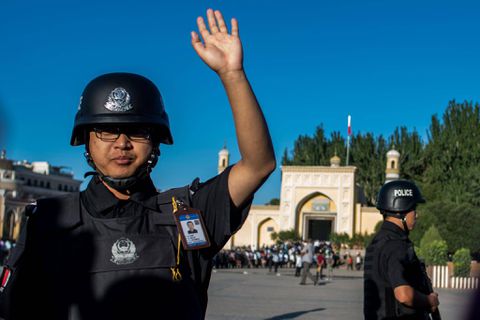 A police officer gestures as worshippers arrive at Id Kah Mosque in Kashgar, in the western Chinese region of Xinjiang, in June, 2017.
March 8 2018

Security spending in China's far western Xinjiang region nearly doubled last year and now far exceeds what is spent on health care or social welfare in a place where authorities have responded harshly to threats of terrorism among the largely Muslim Uyghur population.
The Chinese government often vaunts the good it is doing in Xinjiang, parts of which now resemble militarized zones with prevalent checkpoints and surveillance.
Xinjiang's Uyghurs, one official said last year, are the "happiest Muslims in the world." The Chinese government "has taken effective measures to develop the economy, improve people's living standards, enhance the well-being of the public," boasts a 2017 white paper, Human Rights in Xinjiang. 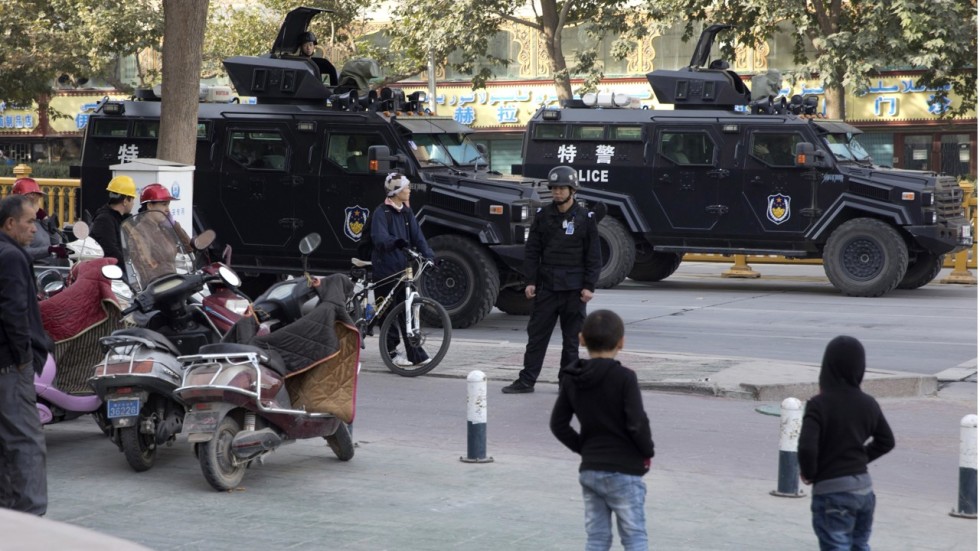 But budget figures brought to light by a foreign researcher show China's outsized concern lies in keeping a grip on the region through tight security measures.
Public-security spending leaped 92 per cent last year in Xinjiang, amid a recruitment push for roughly 100,000 new security officers, many of them police, in the 12 months leading up to last summer, according to figures compiled by Adrian Zenz, a researcher who specializes in Tibet and Xinjiang at the European School of Culture and Theology in Korntal-Muenchingen, Germany.
The region is being transformed into "an experiment of what is possible, how far can this be pushed, how far can you push the securitization of society," Mr. Zenz said.
Xinjiang has built some 7,000 new "convenience" police stations, many of them stationed at intervals of 500 metres, in a push to impose strict control. Uyghurs have fought in Syria and Afghanistan, and China says it is seeking to ensure stability in a region vulnerable to extremism.
The result is that, as a percentage of GDP, Xinjiang spent fully seven times more on public security last year than Canada does on police.
The rise in Xinjiang spending comes amid a broader Chinese emphasis on policing its people under Xi Jinping, who is expected to remain the country's long-term President after a planned abolishment of constitutional term limits in the coming days.
Mr. Zenz, in a research paper that will be published soon by the Jamestown Foundation, has found that China's 2017 spending on internal security exceeded its military spending by 18.6 per cent; the numbers were roughly even as recently as 2014. Mr. Xi took power in late 2012.
"We are seeing a government that is increasingly, it appears, relying on domestic security manpower and technology in order to control society," he said.
The most dramatic change has taken place in Xinjiang, where government reports show a dramatic contrast in priorities from other places. The region's $11.85-billion in public-security spending last year is more than double its outlay on health care; 11 per cent higher than spending on social welfare; and 80 per cent of what was spent on education.
Compare that with Shanghai, for example, which has a similar official population but spent one-fifth what Xinjiang did on public security and nearly five times more on social welfare. Shanghai spending on health care and education also exceeded its public-security outlay.
The Xinjiang figures do show a government investing heavily in schooling. Xinjiang's education spending is more than double Beijing's and the region has benefited from new schools, researchers say. In recent years, Xinjiang has installed thousands of new kindergartens, for example.
But the region has also built political re-education centres, where Uyghurs are held for months at a time without formal charges.
Money is also going to pay for tens of thousands of teachers hired from outside Xinjiang, who are being brought in to deliver Chinese instruction to Uyghur students.
"There is some public good here in terms of better facilities and much better Mandarin-language education, but it comes at a very high cost from the perspective of Uyghur parents," said Darren Byler, an anthropologist at the University of Washington who is an expert on modern Uyghur issues.
"The schools are centred around achieving permanent stability and ethnic harmony, strongly discouraging Islamic education of any kind and emphasizing Han cultural systems."
Meanwhile, "many Uyghur teachers, because their Mandarin is too poor, have quit being teachers and are now working for stability-maintenance organizations, mosques or communities in Xinjiang," said Tahir Hamut, a Uyghur filmmaker and poet who recently moved to the United States.
He isn't surprised at the growth in Xinjiang security spending, amid visible increases in surveillance equipment, police and plainclothes officers "pretending to be ordinary people being placed in different communities. The number of all of the above has increased many times," he said.
The "Chinese government always claims that members of ethnic minorities are living happy lives," he added. "But the fact is that is that since reform and opening up in the 1980s, the living condition of ethnic minorities in China, especially for Uyghurs, has kept getting worse day after day."
Posted by Conan Doyle at 8:52 AM