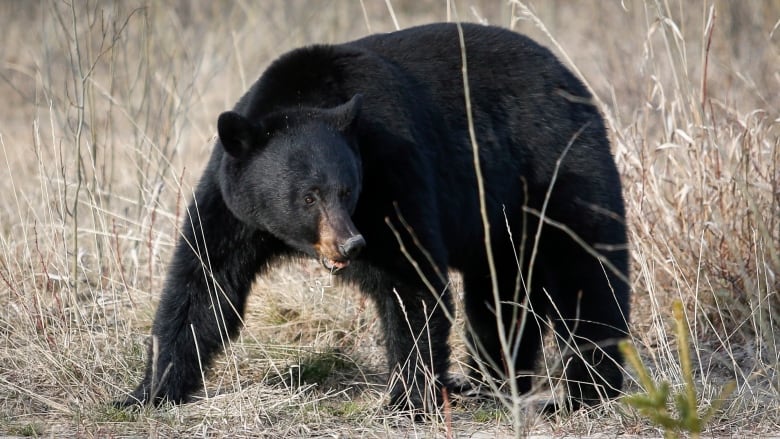 Coquitlam, B.C., acupuncturist Yunhee (Sarah) Kim is being sentenced in provincial court for trafficking in bear parts, a trade driven by the mistaken belief in the medicinal properties of gall bladders and paws. (Jeff McIntosh/Canadian Press)
The patient appeared desperate, armed with $1,000 in cash and a list of complaints he claimed conventional medicine couldn't cure.
It was his second visit to Yunhee (Sarah) Kim's Coquitlam, B.C., acupuncture clinic; the possibility of a treatment involving bear gall bladder had surfaced at the first visit.
Kim claimed she didn't trade in bear bile.
But after a moment's thought, the 50-year-old walked to the back of the suburban clinic and returned with a Grey Goose vodka bottle that was one-third full of greenish liquid.

'A shot glass and a small plastic bottle'

Crown counsel James MacAulay picked up the story at Kim's provincial court sentencing hearing: "She had a plastic bag with something grey in it, a shot glass and a small plastic bottle."
MacAulay said Kim told the patient the plastic bag contained a bear's gall bladder; she claimed to have squeezed its contents into the vodka bottle.
The herbalist poured two shots into the plastic container and the patient gave her $100.
The patient, as it turned out, was an undercover Vancouver police officer. He was working in conjunction with provincial wildlife authorities as part of a months-long sting operation allegedly prompted by a desperate mother's bid to cure her son's severe epilepsy. 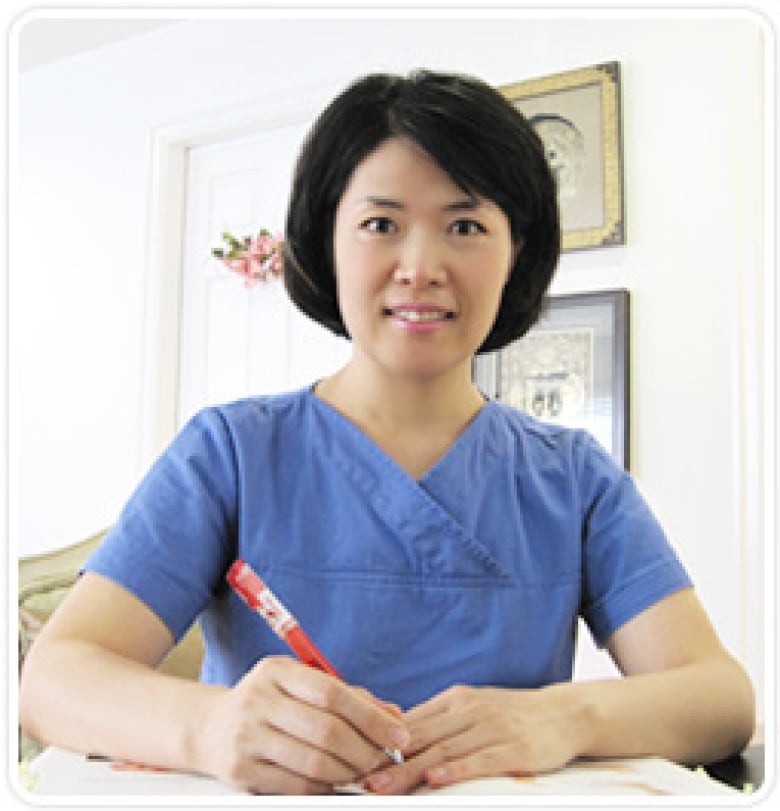 Acupuncturist Yunhee (Sarah) Kim pleaded guilty to trafficking in bear gall bladders and paws. (Kim's Acupuncture and Herb Clinic)
Now Kim faces fines ranging from $17,500 to $1.75 million after pleading guilty to trafficking in bear gall bladders and paws under B.C.'s Wildlife Act.
Her co-accused, Yon Kim, has yet to enter a plea.
But MacAulay told a sentencing hearing Friday the acupuncturist should pay at least $20,000 to $25,000.
He said a heavy fine is needed to send a message to practitioners whose belief in the medicinal power of wild animal parts fuels illicit trade.
"Ms. Kim is a professional in the field, and the message must go out to other professionals who may be tempted to use bear parts in traditional Chinese medicine," he told B.C. provincial court Judge Thomas Woods.
"It's not OK."

Nearly a year after her arrest in March 2015, Kim is still practising at the clinic she has operated for the past six years.
The guilty plea was entered in November.
According to a record of the proceeding obtained by CBC this week, Kim's lawyer told the judge her client grew up the fifth child of a Chinese herbal therapist. She immigrated to Canada in 2003.
She is not related to her co-accused.
MacAulay told the court the investigation began when Yon Kim called a hunter in Cody, Wyoming, in October 2014. She allegedly said her 21-year-old son suffered severe seizures, and she was looking for bear parts as a cure.
American authorities contacted B.C. wildlife officers, who launched an undercover operation. A female officer contacted Yon Kim, who asked about the possibility of buying bear paws as well. 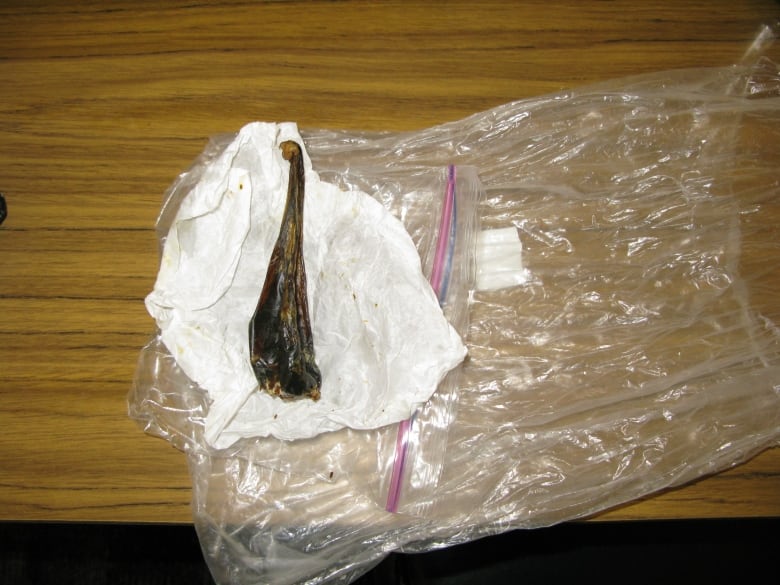 This black bear gall bladder was seized in an unrelated case. The traffic in bear parts is driven by belief in the medicinal properties of gall bladders and paws. (Province of Manitoba)
Yon Kim said a Korean acupuncturist had treated her son with bear bile. MacAulay said undercover officer advised her trading in bear parts was illegal.
"She knew and was ambivalent about the killing of bears," MacAulay said.
"But people were more important."
A meeting was set for a Canadian Tire parking lot in Merritt. MacAulay said Yon Kim told the officer she would be bringing an acupuncture doctor, Yunhee (Sarah) Kim.
The two pulled up in a blue Honda SUV; the Crown said they paid $750 for three black bear gall bladders and four black bear paws.

In the weeks that followed, the undercover officers visited Kim's clinic, and sold her more gall bladders and packages of cut and wrapped deer meat. MacAulay said she asked for meat with joints to use as part of herbal medicine.
Then, in March, the undercover Vancouver police officer attended the clinic: "He presented a list of fictitious ailments believed by investigators to be the type of conditions that may elicit a treatment using bear bile by Sarah Kim."
MacAulay said the acupuncturist was arrested at her clinic shortly after selling the greenish liquid to the undercover officer: "Officers observed the bottle of vodka and a 100-dollar bill on the main reception counter."
Kim's lawyer, Karin Blok, told the court her client should be fined the minimum amount: $17,500.
Blok tried to claim Kim had no intention of trafficking in wildlife parts and believed she was buying paws and gall bladders from hunters who obtained them legally.
Kim also claimed she was not the Korean acupuncturist who treated Yon Kim's son with bile.
She claimed that prior to obtaining bear parts in the sting operation, she had never purchased or used them before.
"It was a grey area for her," Blok said. "She should have made inquiries, but she didn't."
Kim claimed she used the bile in the vodka bottle for her own health complaints and only threw out the $1,000 treatment figure to deter a pestering patient.
Blok said her client will be forced to disclose her conviction to B.C.'s College of Traditional Chinese Medicine Practitioners and Acupuncturists when she renews her registration in March.
The college said it was previously unaware of the charges.
But after an inquiry from the CBC, the registrar said the college will take immediate action to investigate.
Woods will sentence Yunhee (Sarah) Kim on March 4. A different judge will hear Yon Kim's case. Her next appearance is Jan. 18.

I am Sarah Yunhee Kim, a Registered Acupuncturist(R.Ac) in BC. I am pleased that my treatment will make patients have a more healtheir life. Most of my patients have never received acupuncture treatments before, and it is my duty to make them feel comfortable with acupuncture and so I did. With proper diagnosis, treatment and a cooperative relationship between the practitioner and the patient it is possible to have optimal health. I practice a combination of Chinese and Korean styles of Acupuncture. I take pride in providing patients and sixty-year integrated clinical experience passed down from my parents. My treatments have a synergistic approach consisting of a combination of Acupuncture, Massage, Moxabustion, Herbal and Dietary approaches. I am a General Practitioner with special interests in Skin Imbalances, Pain Management, Digestive Disorders, Emotional Well-Being, Promoting Immune Support and Wellness and Women's and Men's Reproductive Health.