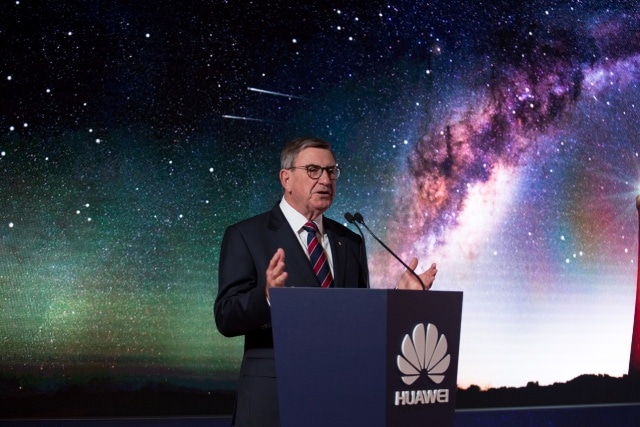 Huawei Australia has hit back at detractors following mounting reports that the telco equipment vendor could be barred from working on Australia's 5G network.
Chairman John Lord fronted the National Press Club in Canberra today in attempt to dispel, what he calls myths, about the company in the wake of reports that the federal cabinet's national security committee is concerned about China's influence over Huawei being a state controlled company.
Reports that the government fears sensitive infrastructure could fall into the hands of China's communist party.
"There are a lot of myths that have developed around Huawei and we as a company have probably failed to properly address or to combat them. There has been a reluctance to be loud and boastful in public, and a reluctance to debate our detractors," Lord told media in Canberra on Wednesday.
When asked about the reports, Lord claimed Huawei was still in discussions with the government about supplying equipment for the 5G network, and that the government had not yet conveyed any information that the company would be banned from the mobile network.
When asked about Huawei's status this morning, treasurer Scott Morrison, who is also a member of the national security committee, told ABC's AM this morning: "We will always act in accordance with the advice of our national security agencies when it comes to matters of national security, that's what I can tell you as a member of the national security committee."
Lord confirmed that there was indeed a communist party branch in Huawei and that the branch had no influence over Huawei's day-to-day operations.
"It meets in non-working hours and looks after staff social issues and activities. It has nothing to do with the management of company and is run by a retired employee of the company," said Lord.
In 2012, Huawei was banned from supplying equipment to the NBN over similar cybersecurity concerns stemming from its Chinese ownership.
When asked about Huawei's track record with the NBN, Lord pointed to competitor Nokia, which is now the sole supplier of the fibre technology GPON. He said that Nokia's factory is a joint venture between the company and a Chinese state-owned enterprise, and that it was barely a kilometre from Huawei's own facility.
"I highlight this not to be critical of Nokia, because Huawei obviously manufactures its products in China, but I do it to underline the reality of the world we live in. Our supply chains are global, our production lines are similar. Huawei or no Huawei much of the 5G equipment will continue to be made in China," said Lord.
Lord said that a decision to ban Huawei from building 5G networks in Australia should be "a concern for everyone and every business in Australia."
"The implications about limiting access to technology competition will be devastatingly high – and is a short term small mind choice rather than seeking to incorporate all technologies in a solution that also secures our critical structures."
Lord said that Huawei is the largest supplier of mobile broadband in the country, and already works with the likes of Optus, Vodafone and TPG, claiming to have conducted the first 5G call in the world with Vodafone.
Huawei has already drawn attention to itself this week when ABC reported that the company was the biggest corporate sponsor of overseas travel for Australian federal politicians.
Posted by Conan Doyle at 4:04 PM