They rank among the highlights for a group of 10 student pilots from China who are training to be commercial pilots at Springbrook’s Sky Wings Aviation Academy Ltd.

“Living here has, so far, been good, except we can’t get used to the cold out here,” said Guo, who picked his Canadian name when he arrived, as did the other students.

“But the rest of it, I love it. The beef here, all the groceries are pretty good.

“By the way, we like the beers. You know men like beers,” said Guo with a laugh.

“We all gained lots of weight.”

Beef and beer aside, the big draw for Guo and his colleagues — eight other males and one female — is the opportunity to quickly get the licences and instrument ratings necessary to turn their passions for flying into careers.

Guo already has his pilot’s licence and will soon receive his instrument rating and commercial licence, a year after beginning his training at Sky Wings. The others are on a similar pace and will finish their Canadian training in the next few weeks. 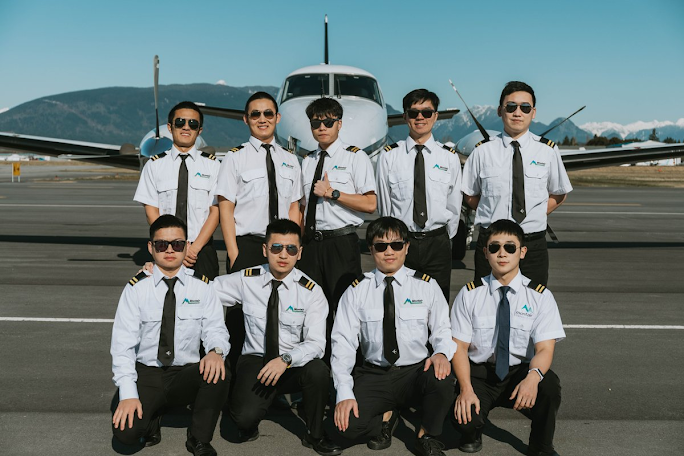 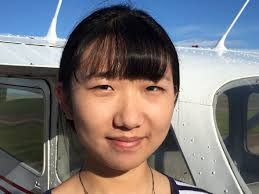 “It takes three or four years in China. It only takes one year here so it’s pretty fast.

After they get their licences in Canada, they will return to China and fly for China Flying Dragon Aviation, a general aviation company that runs a fleet of twin-propeller planes based in Harbin, a city of nearly six million in northeastern China.

Guo said among the jobs likely in his future is working on forest firefighting contracts.

He is also considering becoming an instructor.

Steven Jia, 31, said picking up English, which the pilots don’t use in China, was among the biggest challenges students faced.

Being so far from home and loved ones — Jia married only a week before he came to Canada — has also been tough.

Students are in regular contact with home through emails and Skype. Each room is equipped with Wi-Fi connections.

The whole experience has been “enjoyable,” though, he says.

“I’ve learned a lot of the aviation stuff. I’m so happy here.”

While his wife has missed him greatly, in a few weeks he will return to China with the training to land a good job, he says. Some day, he’d like to show Canada to his wife.

Angus Bai, 26, will also be taking home good memories along with his pilot ratings.

“I will always tell my family in China about my flight experience here. It was a fantastic experience.”

Bai said the students also learned a great deal about weather as it relates to aviation.

In their spare time, students regularly took the bus into Red Deer.

They also had fitness memberships at the Penhold Multiplex and Sky Wings supplied a fleet of 10 mountain bikes they could use as transport.

Bai said the students, who did their own cooking in their university residence-style accommodations in a hangar next door, enjoyed the local food.

Each week, a group of students got a lift from a local limousine company and stocked up on supplies, returning with dozens of bags of groceries to keep them going for the week.

Sky Wings owner Dennis Cooper said the experience with the Chinese pilots has worked out great.

Of the 10 students enrolled now, five are expected to return as instructors with the next contingent of 10 to 15 students.

In all, Cooper hopes to train up to 200 Chinese pilots as part of a nearly $15-million deal announced a year ago.

“They couldn’t believe how fast we work here. We’re flying and doing the in-flight training faster than anyone else they’re using, and faster than what they can do in China.

“It’s mainly because of our weather. We’ve got a lot of blue sky out there.

“These students have close to 200 hours of flying out of here. That’s a lot of flying from here. They live, eat, breathe, sleep flying.”

Cooper said the students have learned a lot and flown all over this part of Western Canada — as far as Regina and Lethbridge and into the mountains.

“The biggest challenge, of course, is the English.”

Before students were picked to come over, they were given an international aviation language test over the phone to ensure they could understand enough to get by.

Students understood what they were taught, but it was responding to questions that proved an early challenge.

At the start, instructors would get one-word answers but students’ skills soon improved.

“We’d challenge them with day-to-day conversations.” Some of the students with good English skills helped their colleagues as well.

“English is different in the cockpit because it’s an ask-and-demand language.”

“You keep the radio talk very, very short and precise. That was the first thing to teach them that kind of language.”

Each flight is recorded so students and instructors can listen to flight conversations to identify areas for improvement.

Besides the obvious cultural differences, there were other signs that the students lived a different life at home.

Cooper said he was taken aback to see surgical masks hanging from bed posts in the students’ dorm rooms when they first arrived. They explained those were to be worn on smoggy days.

“I said the only times we have bad air is when it’s -40C here. That’s the only bad air you’re going to get here,” he laughed.

“They can’t believe how blue the skies are, how bright the stars are.”