Trouble in Paradise: A Chinese Occupation in Tahiti

Trouble in Paradise: A Chinese Occupation in Tahiti 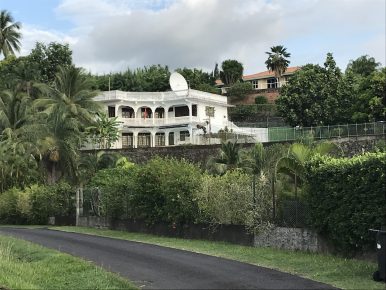 TAHITI — China’s strategic and military interests in the South Pacific are expanding rapidly. They build on longstanding links and fill the vacuum left by receding U.S. and French power projection in the region, as well as Australia and New Zealand’s longstanding neglect of key relationships.
China is now acknowledged by many Pacific leaders as the dominant power in the region. While Pacific leaders will continue to work with traditional partners, they will not back down on their expanding relations with China. China has offered to them what the United States and its allies cannot, massive sums of money for development projects that promise jobs and economic independence.
But China — like any lender — exacts a price for its aid, and Pacific nations are gradually learning the cost. Nothing sums up the challenges and dilemmas Pacific peoples face in dealing with a rising China more than the simmering political scandal over the Chinese consulate in Tahiti’s illegal occupation of a house used for China’s diplomatic offices in French Polynesia.
The two-story, five bedroom “Résidence Taina,” built in an imposing French colonial style, sits on a prominent aerie above the Taina Marina at Puna’auia in the suburb Taina, close to Pape’ete. The house is crowned with a large north-facing satellite dish. Coincidentally — and perhaps auspiciously for the Chinese consulate — the name of the house, the suburb, and the marina it overlooks means “China” in Tahitian.
The Chinese consulate has been renting the property since 2007. The property owners say that China never respected the terms of the rental agreement, so in 2017 they refused to renew the lease. According to the rental agreement, the building was to be used for accommodation purposes only. It is located in a private residential area; but China turned the house into diplomatic offices. The consulate did not pay rubbish collection fees for the house for 10 years. They denied the property owner, 76-year-old Huguette Ly, rights to inspect the property regularly. Consular staff physically and verbally intimidated her and her daughter, Eva Bitton. They also installed the satellite dish on the roof of the house without her permission — though they would have had to obtain the consent of the French government to set it up.
The consulate was given six months to evacuate the property, and the consul agreed in writing to move out at the end of this period. This extension ended on February 28, 2018; but the current consul, Shen Zhiliang, is refusing to leave and is demanding the owner sell the house to China. But the house, Ly’s former family home, is not for sale. Consular staff claimed in a 2017 letter to Ly that “once rented, the house has become territory of the People’s Republic of China.” The consul has declined to speak to media about the case.
China has growing interests in French Polynesia. One of the most prominent is the investment of Tahiti Nui Ocean Foods, a subsidiary of mining company China Tianrui Group, in Hao Island. With the assistance of significant financial concessions and subsidies given by the government of President Ėdouard Fritch, Tahiti Nui Ocean Foods is setting up a fish farm and processing plant on Hao Island that plans to export live fish to China via the massive airfield there, up until 1996 used by French bombers during the era of nuclear tests in French Polynesia.
In addition to the Hao project, HNA Group has also invested in the Hilton Hotel in Mo’orea and St Regis Hotel in Bora Bora. The French Polynesian government had hopes that HNA would invest in further hotels, a golf course, and even a budget airline. Banking links have recently been set up with China UnionPay.
French Polynesia is in great need of foreign investment that will create employment. It is France’s largest overseas territory, and has limited autonomy, a failing tourist-based economy subsidised by French aid, and very high rates of unemployment and poverty. France is in charge of French Polynesia’s foreign affairs, defense, and justice matters. The French government’s representative in Tahiti has refused to intervene in the dispute over Résidence Taina, telling Eva Bitton no court in France would take the case. 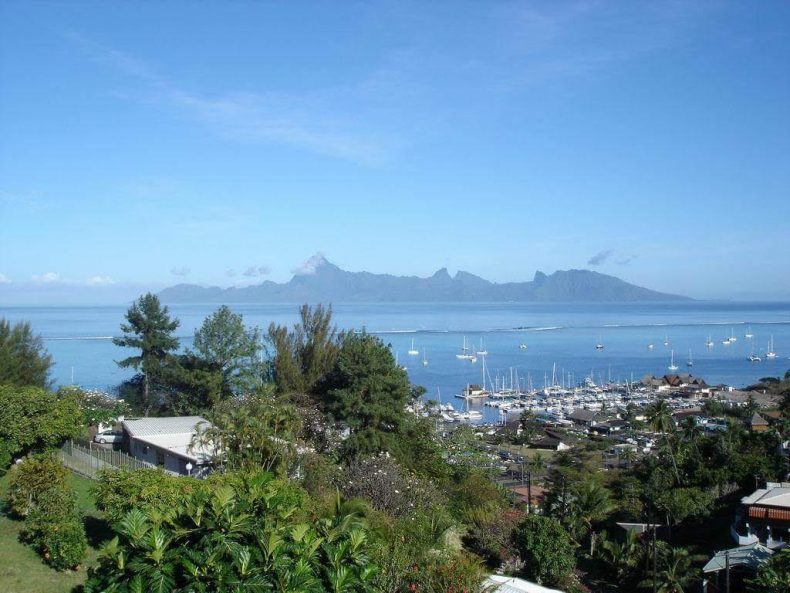 A view from the rooftop of Résidence Taina. Photo by Eva Bitton.
Bitton has launched a social media campaign to bring attention to the situation. She says she has been forced to do so because the French Polynesian media have been told not to cover the story — though there have been limited reports in a local magazine and on television. People in the community know what is going on and Bitton’s campaign has received a lot of support.
Local politicians are sympathetic to her plight and acknowledge she and her mother are within their legal rights. But they have also told her “China cannot be challenged” as they fear speaking up may risk losing China’s multiple investment projects in French Polynesia.
French Polynesia will hold territorial elections on April 22, and China’s growing interests there are one of the topics of popular concern, even if local politicians and media are mute on the subject.
In 2017 the Fritch government offered land in central Pape’ete to the Chinese consul; at a modest rent, on a long-term lease. The government explicitly stated that this was so China could move out of Résidence Taina and build a new consulate. But the Chinese consul refuses to move to the new location. The proposed new site for the consulate buildings would be much more convenient for processing visas and passports — but it is not suitable for hosting a satellite dish.
Satellite interests are an important aspect of China’s surge into the South Pacific. China plans to launch 18 BeiDou-3 satellites into space in 2018. Beidou-3 is China’s indigenous GPS; by the end of 2018 it will provide missile positioning and timing and enhanced C4ISR capabilities for the Chinese military, as well as navigation services to more than 60 countries along the Belt and Road, including in Oceania. Pape’ete is where China’s mobile satellite-receiving vessel, Yuan-6, as well as other quasi military boats such as the Peace Ark and China’s maritime research vessels, regularly dock.
The consul has a further potential option for the consulate, a prime piece of real estate close to the wharves in downtown Pape’ete. This was formerly the site of the consulate of the Republic of China, who were forced to move after France established diplomatic relations with the People’s Republic of China. The ownership of this land has been returned to local Chinese community groups.
Due to diplomatic conventions, the Chinese consulate’s illegal occupation of Résidence Taina can only be resolved by political intervention at the highest level in France. On April 16, when meeting with New Zealand Prime Minister Jacinda Ardern, French President Emmanuel Macron echoed the words of Ardern’s debut foreign policy speech, which emphasized New Zealand’s renewed focus on the Pacific and stressed that her government upheld a values-based foreign policy — all of which can be read as an oblique critique of the negative aspects of China’s expansion in the Pacific. Macron told Ardern that France is also a Pacific nation, and emphasized that his government, like Ardern’s, also upheld a values-based foreign policy.
If that is indeed the case, now is the time to demonstrate France’s commitment to the Pacific and upholding of democratic values and rule of law, by politely reminding the Chinese representatives in French Polynesia of their obligations under the Vienna Convention to “respect the laws and regulations of receiving states” — in this case the property rights of a vulnerable citizen of the Republic of France.
Professor Anne-Marie Brady is a political scientist based at the University of Canterbury in Christchurch, New Zealand and a Global Fellow at the Wilson Center, in Washington, D.C. Her most recent book is China as a Polar Great Power (Cambridge University Press, 2017).
Posted by Conan Doyle at 8:51 PM