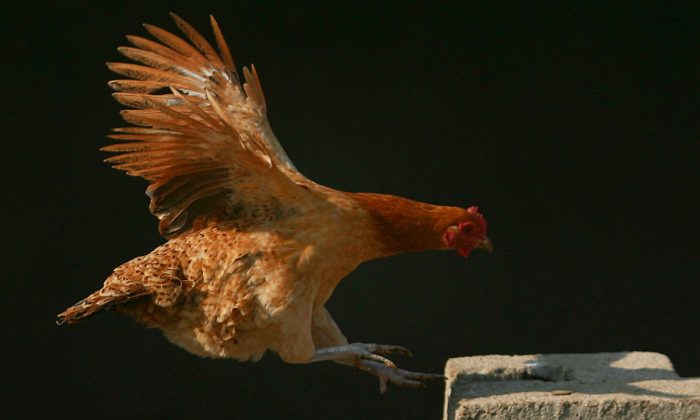 A chicken flying at a chicken farm in China. (China Photos/Getty Images)


Warning: This report contains video footage with disturbing images.
Customers at a park in mainland China can fire metal slingshot balls at live chickens as a new form of entertainment, according to multiple reports from Chinese media sites on March 29.
The park, located in Henan Province, offers the chickens to slingshot enthusiasts for free if the shooter hits the chicken in the head. If they only hit the chicken, and don’t kill it, they must pay $15.
“It’s kind of gruesome” female guest said in the video with a laugh. “Frightening.”
China, in recent history, has done very poorly on animal rights. China’s recent increase in wealth has led to even worse treatment of animals internally and abroad.

A Chicken, A Slingshot

The group of onlookers cheers as a man in a wine-colored coat shoots a chicken. “That’s a spot-on headshot,” one of the individuals offscreen could be heard saying in the video.
The chicken flails around wildly on the ground, flapping its wings and stumbling through the grass. The next scene shows a similar killing by a man in a red shirt and black vest shoots a chicken. The chicken was standing near a cage full of chickens.
Reports said that the park has encouraged many slingshot enthusiasts to congregate there.
“If you hit its head with one shot and kill it, you take it home for free.” the boss said. “If you hit and don’t kill it, then you have to pay 100 yuan [$15].”
The boss said that whether or not the shooters kill the chicken, they’ll still take the bird home.
Another man, with a cigarette dangling from his mouth, shoots at a chicken across a small creek. He then runs across, and picks it up.
“Spoils of war!” the man raises his hands over his head. The flailing bird is in his right hand, the slingshot in his left hand. “Last year, I hit more than 100 chickens with that slingshot.”
A woman filming the video asks a man holding a chicken, “Is this cruel or not?”
“This!” a man in a black shirt shouts at first in the video, clenching the chicken by it’s wings. “It’s entertainment.”

A Price For Any Life

As China’s economic influence expands, so does its recklessness in the treatment of animal life.
Illegal wildlife trafficking for Traditional Chinese Medicine (TCM) has rapidly expanded in recent years. Modern TCM is often a poorly understood derivative of the actual study that is thousands of years old, and which has been modified and the knowledge diluted overtime, to the point where now it emphasises obscure body parts from rare and often endangered animals.
A wide range of species endangered by the practice include pangolin, rhino, moon bears, turtles, and tigers.
Environmental groups say modern TCM treatments are still common in China. Treatments are used for illnesses as serious as cancer to relatively insignificant issues like hangovers.

In a report featured on the World Health Organization website, a Chinese researcher explained in broken English how this departure in modern TCM has occurred.
“The policy-makers and researchers in China are seemingly having their passions for integrating TCM and modern medicine into one, and the fact [sic] turn out to be that TCM cannot employ its values completely in national health system.
“Those people educated and trained by scientific method and other so-called modern methods lack the ability of using correctly the non-medication therapies and medication therapies of TCM, and thus the clinical and preventive value of TCM in national health system is lessened by a regretful manner,” the report read.
“The goal of studying with modern methods is to enhance the value of TCM and to keep TCM from extinction, but in a long run, TCM is reformed to be another kind of medicine.”
Western medical researchers were invited to China to witness the results of the merging of traditional and modern medicine that had occurred during the Great Proletarian Cultural Revolution. Mao Zedong fostered a ‘renaissance‘ in Chinese medicine following previous attempts to banish the practise due to the acute health problems faced by Chinese during the civil war that could be treated using Western medicine.
During a 1971 tour of a few medical institutes in China to learn how they were integrating traditional and modern medicine, Dr. Kewal Jain said he was told that “prior to the Cultural Revolution the bourgeois ruled the hospital, with chiefs appointed to each department.”
But now, Jain said “this system has now been abolished and revolutionary groups are in every department as well as in the general administration of the hospital.
“However, with the abolition of examinations there is no yardstick to measure the standard of knowledge of physicians in China.
“Types of medical personnel are very poorly defined. The term ‘M.D.’ as we understand it is not used but any one who can help the sick is a ‘doctor.'”
He continued, “A disturbing aspect is the introduction of political indoctrination into medicine.
“Before acupuncture anethesia is commenced, the patience and attending physician recite quotations from Chairman Mao’s book and his picture faces the patience in every operating room.”
Posted by Conan Doyle at 8:34 AM