By Wills Robinson For Dailymail.com and Reuters

The Chinese CEO of a global human rights foundation has admitted bribing a senior U.N. official with cash, Rolexes and BMWs in return for influence.
Sheri Yan, the head of the Global Sustainability Foundation, pleaded guilty in a New York federal court to one count of bribery in connection with illicit payments made to John Ashe, the former General Assembly president.
He is accused of accepting $1.3million of bribes from Chinese businessmen to support their interests within the United Nations and Antigua.
Choking back tears, 60-year-old Yan admitted that beginning in 2012, she agreed with others to pay Ashe, who was also the U.N. ambassador from Antigua and Barbuda, to influence officials in Antigua and the United Nations to support business interests.
'While I was doing these things, I knew that they were wrong,' Yan said through a Mandarin interpreter. 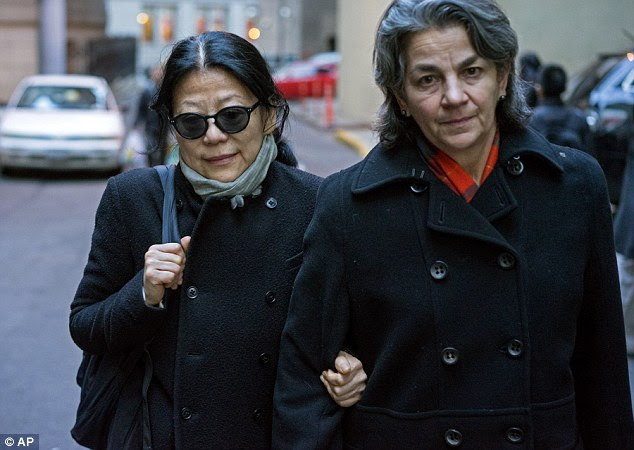 +4
Sheri Yan, 60, the head of the Global Sustainability Foundation has admitted bribing a U.N. official with cash, Rolexes and BMWs in return for influence. She is pictured, left, outside a court in New York on Thursday 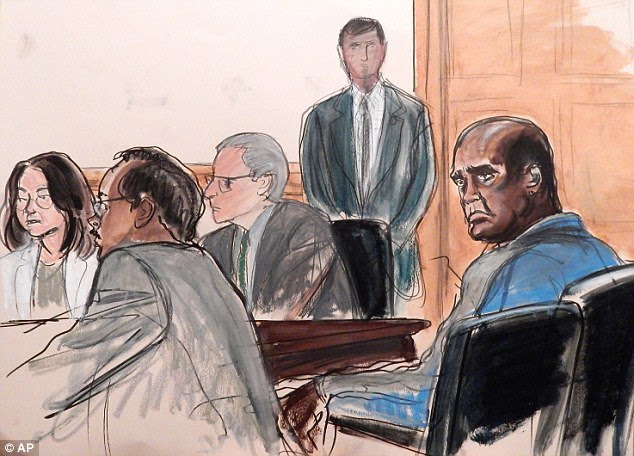 +4
Choking back tears, the 60-year-old philanthropist (far left in a court drawing) admitted she agreed with others to pay John Ashe (right), who was also the U.N. ambassador from Antigua and Barbuda, to influence officials
The plea by Yan, a U.S. citizen, comes less than a week after the former finance director at the foundation, Heidi Hong Piao, pleaded guilty and agreed to cooperate with authorities in their continuing investigation.
Both women were arrested in October by the FBI as prosecutors unveiled charges over a multi-year scheme to pay more than $1.3million in bribes to Ashe.
Unlike Piao, though, Yan's plea came without any agreement to cooperate with authorities. Under a plea agreement, Yan, who also is known as Shiwei Yan, agreed not to appeal any sentence of seven-and-a-quarter years in prison. Her sentencing is set for April 29.
The bribes Ashe allegedly received included more than $800,000 from three businessmen that were arranged through Yan and Piao, prosecutors said.
In court, Yan said she and others paid Ashe to persuade officials in Antigua to enter into contracts with foreign companies, and to use his U.N. position help her and others promote business ventures from which we intended to profit. 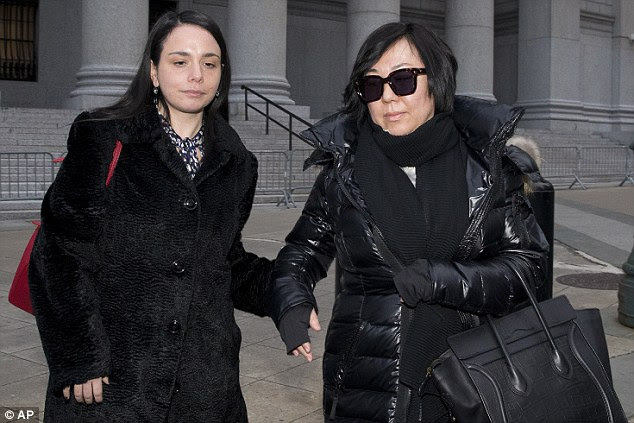 +4
Yan (pictured right with her attorney outside the Manhattan federal court last week) said through a Mandarin interpreter that she knew her conduct was wrong
Prosecutors have also charged Ng Lap Seng, a billionaire developer from the Chinese territory of Macau who allegedly paid $500,000 in bribes to Ashe through intermediaries.
Those intermediaries included Francis Lorenzo, a now-suspended deputy U.N. ambassador from the Dominican Republic, and Jeff Yin, Ng's assistant, prosecutors said.
Ashe, Lorenzo, Ng and Yin have pleaded not guilty.
Ashe, 61, has only been charged with tax fraud, as prosecutors have said diplomatic immunity may preclude any bribery charges.
But prosecutors have said they were examining the issue and likely would bring further charges.
A lawyer for Ashe did not immediately respond to a request for comment. 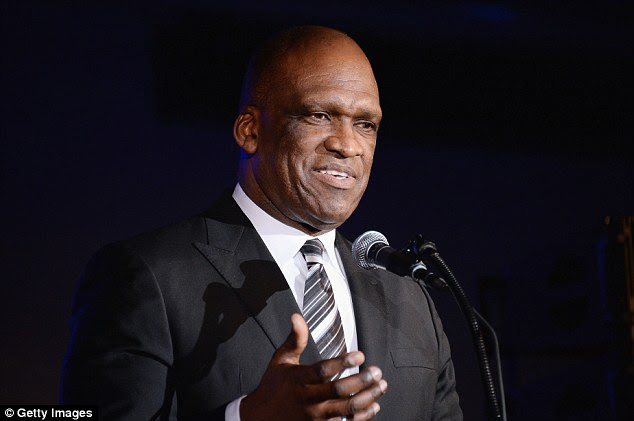 +4
Prosecutors allege that Ashe (pictured), the U.N. General Assembly president from 2013 to 2014, accepted $1.3million of bribes from Chinese businessmen to support their interests within the UN and Antigua 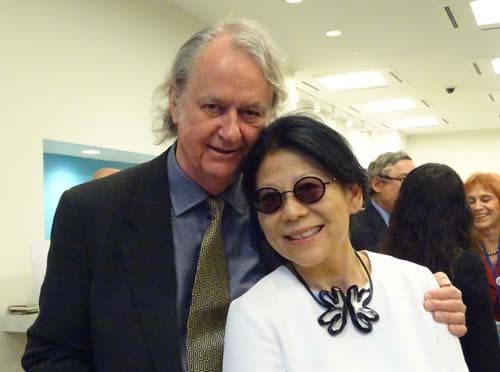 Billionaire Macau real estate developer Ng Lap Seng, who is accused by US prosecutors of bribing a former United Nations General Assembly president, has demanded an immediate trial, with his lawyer saying Ng’s businesses were suffering.
Ng, 68, was arrested on September 19 and faces the prospect of waiting several months more before trial. Benjamin Brafman, a lawyer for Ng, urged a federal judge in Manhattan to start it within weeks.
Brafman, said “irreparable damage” was being done to his client. He cited conditions at businesses owned by Ng, who has a US$1.8 billion net worth and developments in Macau.

“Businesses are beginning to suffer substantial setbacks,” Brafman said in court. “It's not fair. We’re asking for an immediate trial.” 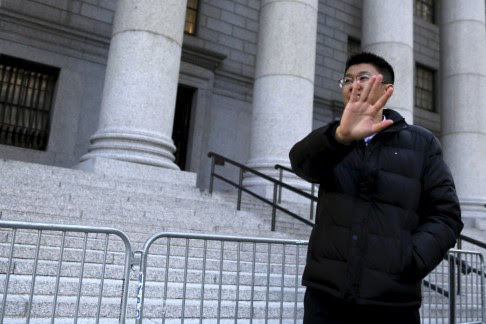 His request was joined by a lawyer for Jeff Yin, Ng’s assistant, who like his boss is accused of scheming to bribe John Ashe, a former UN ambassador from Antigua and Barbuda who was UN General Assembly president from 2013 to 2014.
Assistant US Attorney Janis Echenberg indicated the government would oppose the request, saying prosecutors were against trying any of the defendants separately.
She also said prosecutors were still producing evidence and that further charges are “likely”.
US District Judge Vernon Broderick asked for further briefing on the matter before a January 21 hearing.
Ng, who heads the Sun Kian Ip Group, and Yin, 29, were initially arrested on charges of making false statements to customs officials about why they brought US$4.5 million into the United States from China.
They were later charged in the bribe case on October 6 with four others including Ashe, who prosecutors said took more than US$1.3 million in bribes from Chinese businessmen to support their interests within the UN and Antigua.
Prosecutors said Ng, through intermediaries, paid Ashe, 61, more than US$500,000 to seek UN support of a UN-sponsored conference centre in Macau.
The intermediaries included Yin and Francis Lorenzo, a now-suspended deputy UN ambassador from the Dominican Republic who prosecutors said also received bribes from Ng.
Ashe also received more than US$800,000 from Chinese businessmen to support their interests within the UN and Antigua, prosecutors said.
Those payments were arranged through Sheri Yan, who was the Global Sustainability Foundation's chief executive officer, and Heidi Park, its finance director, prosecutors said.