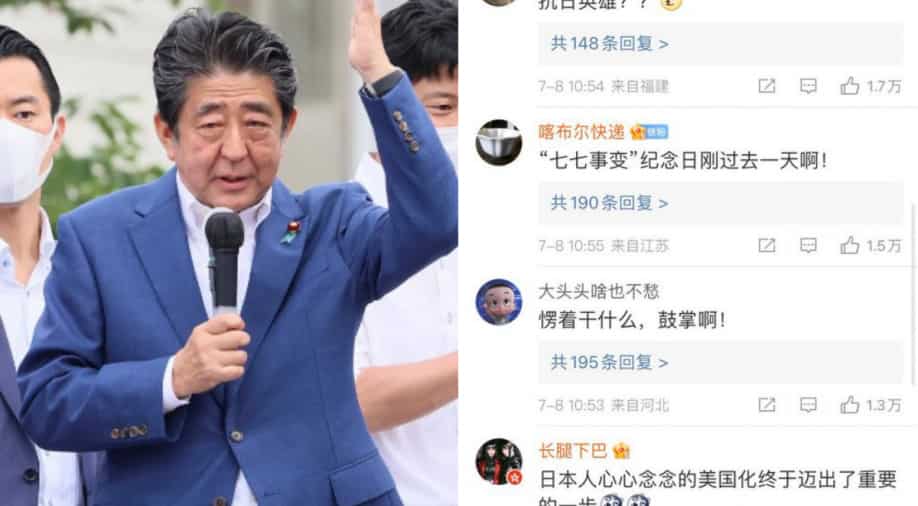 Shinzo Abe dead: It is learnt that some Chinese nationalists celebrated the shocking incident and hailed the attacker as a 'hero'. The accused has been identified as Yamagami Tetsuya, who is a resident of Nara city

The world is in shock after the terrible news about Japan's former prime minister Shinzo Abe's demise was circulated Friday morning. Initially, the Japanese government confirmed that Abe had been shot in the western region of Nara. Later, public broadcaster NHK and Jiji news agencies confirmed that Abe is dead.

World leaders and people around the world have reacted with shock and concern to the 'despicable' attack on Abe, however, it is learnt that some Chinese nationalists celebrated the assassination bid.

Why Chinese hail the attacker of Shinzo Abe?

Moments after Abe was shot during a campaign speech in western Japan, some Chinese nationalists celebrated the incident on Weibo, which is China's Twitter-like microblogging site. They hailed the attacker as a 'hero' and even sent death wishes to Abe.

A verified Twitter handle, @badiucao, claimed: "Chinese nationalists on Weibo have began to celebrate that Japan’s ex PM Abe is shot during campaign today. they call the attacker “hero” and send death wish to Abe".

ALSO READ | Who is Shinzo Abe, the former PM of Japan? Why was he shot and what is the motive?

The local police said that he was shot twice, with the second shot hitting him in the back, causing him to fall to the ground. The accused has been identified as Yamagami Tetsuya, who is a resident of Nara city.

Local sources had told local media that a gun seized at the scene appeared to be handmade. Abe was transferred by medevac to Nara Medical University Hospital in Kashihara city.

Indian Prime Minister Narendra Modi said Friday he was "deeply distressed" by the shooting of Shinzo Abe, describing the former Japanese premier as a "dear friend". PM Modi Modi wrote on Twitter: "Deeply distressed by the attack on my dear friend Abe. Our thoughts and prayers are with him, his family, and the people of Japan."

British Prime Minister Boris Johnson said that he was "appalled and saddened" by the shooting of the former Japanese premier.

Johnson tweeted, "Utterly appalled and saddened to hear about the despicable attack on Shinzo Abe."