Australia To Forcibly Vaccinate Citizens Via Chemtrails-Truth..fact checker trying to claim its false 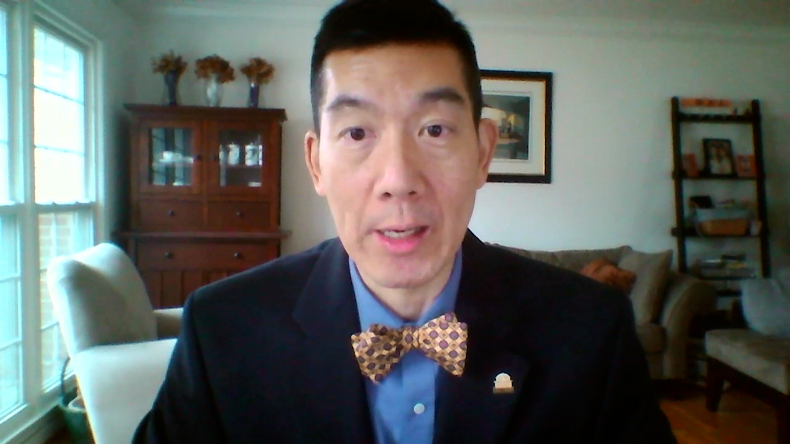 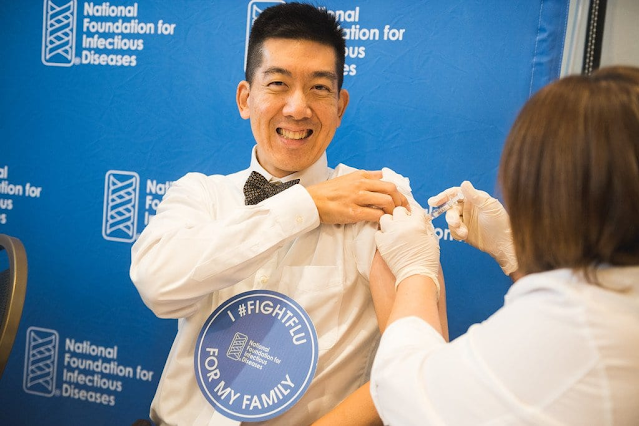 Dr. Chen is an adult infectious disease physician-scientist with a specific interest in developing vaccines. He is Chief of the Adult Clinical Studies section within the Center for Vaccine Development and Global Health and Director of the UMB Travel Medicine Practice. His research is concentrated on two broad areas of global health. First, he is devoted to developing vaccines for enteric pathogens, infectious diseases chiefly of resource poor and economically disadvantaged countries and populations. Second, he is interested in improved vaccines for the elderly, a rapidly growing segment of the global population which is susceptible to many infections and a special population that generally responds poorly to vaccination.

Dr. Chen is active investigator within the NIAID-supported Vaccine and Treatment Evaluation Unit (VTEU), composed of 10 academic centers throughout the U.S., and was the principal investigator of the NIAID-supported Food and Waterborne Diseases Integrated Research Network Clinical Research Unit (FWD IRN CRU). He has been a PI on vaccine trials for: influenza viruses (Seasonal, Pandemic 2009 H1N1, Avian H5N1, and Avian H7N9 influenza), agents of bioterror (Tularemia, Smallpox, and Staphylococcal enterotoxin B), and enteric pathogens (typhoid, cholera and enterotoxigenic E. coli). He also develops and conducts human experimental challenge studies, closely monitored infections with well-characterized pathogens, to gain new insights into pathogenesis, the immune response, or early efficacy of candidate vaccines or therapeutics.  He holds FDA INDs for wild-type V. cholerae and enterotoxigenic E. coli (ETEC) challenges. With funding from the Bill & Melinda Gates Foundation, Dr. Chen is working with a Shigella challenge model and he worked on the development of a challenge model for Cryptosporidium hominis; with funding from PATH (an international nonprofit organization, Program for Appropriate Technology in Health) he worked on a challenge model for heat-stable enterotoxin (ST)-only expressing ETEC.

Dr. Chen serves on a number advisory capacities, including as voting member of the CDC's Advisory Committee on Immunization Practices and core member of NIAID's Data and Safety Advisory Board.

Chemtrails vaccine claim is a flight of fancy

Australia approved a pharmaceutical company to vaccinate its citizens aerially via so-called chemtrails.

False. The approval was for an orally ingested cholera vaccine trial. Vaccines can't be effectively sprayed from an aeroplane.

An article posted on an anti-vaccination group’s Facebook page claims the Australian government gave approval for a pharmaceutical company to forcibly inoculate people by spraying vaccine from a plane.

The claim is false. Experts have told AAP FactCheck no aerosol vaccines are capable of being distributed via aircraft. The approval in 2014 was for the trial of the cholera vaccine Vaxchora involving about 1000 participants ingesting the medication orally.

The article from a conspiracy website was first shared to Facebook in 2016, but has had a recent resurgence with more than 100 shares since June 5.

The headline ominously warns “Australia To Forcibly Vaccinate Citizens Via Chemtrails”, before claiming: “Australia have approved the licence application from Big Pharma company PaxVax that will allow them to intentionally release a GMO vaccine consisting of live bacteria into Queensland, via chemtrails.”

However, the article provides no evidence Australia has approved any vaccine to be delivered by chemtrails – which are actually contrails, water condensation sometimes seen following aircraft high in the sky.

Instead, the article details examples of aeroplane delivery methods of chemical substances, such as anti-mosquito insecticide spray and rabies vaccine pellets for raccoons in the US.

Chemtrail conspiracy theories allege contrails are made up of chemicals intentionally sprayed on unsuspecting citizens. Despite being debunked as a naturally occurring phenomenon caused by condensation, the misinformation continues to spread, spurred on by the backlash to the COVID-19 pandemic.

Wilbur Chen, a vaccine scientist who worked on the development of Vaxchora, dismissed the claim.

Emergent Biosolutions, which acquired PaxVax in 2018, also denies the claim.

“Vaxchora was never sprayed from aeroplanes to forcibly vaccinate Australians or anyone else,” Emergent media relations director Matt Hartwig told AAP FactCheck in an email. “The vaccine must be ingested in order to provide the patient with protection against cholera.”

Oral vaccines, such as the one for polio, are designed to be taken in liquid form. To be dispersed in the air by a plane it would have to be an aerosol. Aerosol vaccines exist, but are taken by inhaling the substance nasally, not sprayed from a plane at cruising altitude.

Michelle McIntosh, a drug delivery expert at Monash University who has worked on projects attempting to determine the viability of aerosol vaccines, says she’s “unaware of any vaccination programs where an aeroplane is used to deliver an aerosol plume of powder intended for human inhalation/vaccinations”.

“An important consideration in vaccination programs is ensuring that each patient receives the correct dose, which could not be achieved with an aerial sprinkle of a vaccine powder,” she said in an email.

According to the article, OGTR said the vaccine qualified “as a limited and controlled release under section 50A of the Gene Technology Act 2000“. However, this does not mean PaxVax was given approval to release the vaccine from a plane.

Associate Professor Fiona McDonald, a health law expert at the Queensland University of Technology, told AAP FactCheck in an email that section 50A of the Act is intended to restrict the spread of GMOs in the environment in experiments conducted outside of a laboratory.

The OGTR approved the trial under these grounds after a risk assessment found there were negligible risks to the environment and community.

A spokesman for the Department of Health told AAP FactCheck via email the OGTR “has never approved, or been asked to approve, aerial distribution of any vaccines”.

False – The claim is inaccurate.

Here is the article they discredit, claiming its false. Where is solid evidence that it is. Chemtrails are a fact and yet they say its a fiction, so right there why believe this lie by a so called fact checking group. Do your own research folks.

Australia has approved the license application from Big Pharma company PaxVax that will allow them to intentionally release a GMO vaccine consisting of live bacteria into Queensland, via chemtrails.

PaxVax is seeking approval to conduct the clinical trial of a genetically modified live bacterial vaccine against cholera.

Once underway the trial is expected to be completed within one year, with trial sites selected from local government areas (LGAs) in Queensland, South Australia, Victoria and Western Australia. PaxVax has proposed a number of control measures they say will restrict the spread and persistence of the GM vaccine and its introduced genetic material, however there is always a possibility of these restrictions failing and infecting wildlife and ecosystems.

Aerial vaccines have used in the United States directed towards animals by the use of plastic packets dropped by planes or helicopters.Sanofi (who is one of the largest vaccine manufacturers in the world) has subsidiary companies such as Merial Limited who manufacture Raboral, an oral live-virus poisonous to humans yet distributed wildlife in the masses.

Under the mandate for aerial spraying for specific vectors that pose a threat to human health, aerial vaccines known as DNA Vaccine Enhancements and Recombinant Vaccine against WNV may be tested or used to “protect” the people from vector infection exposures. DNA vaccine enhancements specifically use Epstein-Barr viral capside’s with multi human complement class II activators to neutralize antibodies. The recombinant vaccines against WNV use Rabbit Beta-globulin or the poly (A) signal of the SV40 virus. In early studies of DNA vaccines it was found that the negative result studies would go into the category of future developmental research projects in gene therapy. During the studies of poly (A) signaling of the SV40 for WNV vaccines, it was observed that WNV will lie dormant in individuals who were exposed to chicken pox, thus upon exposure to WNV aerial vaccines the potential for the release of chicken pox virus would cause a greater risk to having adult onset Shingles.

In February 2009 to present date, aerial spraying for the WNV occurred in major cities within the State of California. During spraying of Anaheim, CA a Caucasian female (age 50) was exposed to heavy spraying, while doing her daily exercise of walking several miles. Heavy helicopter activity occurred for several days in this area. After spraying, she experienced light headedness, nausea, muscle aches and increased low back pain. She was evaluated for toxicological mechanisms that were associated with pesticide exposure due to aerial spraying utilizing advanced biological monitoring testing. The test results which included protein band testing utilizing Protein Coupled Response (PCR) methods were positive for KD-45. KD-45 is the protein band for SV-40 Simian Green Monkey virus. Additional tests were performed for Epstein-Barr virus capside and Cytomeglia virus which are used in bioengineering for gene delivery systems through viral protein envelope and adenoviral protein envelope technology. The individual was positive for both; indicating a highly probable exposure to a DNA vaccination delivery system through nasal inhalation.

In the Quarterly FunVax Review in June, 2007, the report lists the objective of a project listed as ID: 149AZ2 as a preparation of a viral vector that will inhibit/decrease the expression of a specific disruption gene (VMAT2) within a human population. It further indicates in the abstract that six method of virus dispersal were tested including high altitude release, water supply release, insect transmission, and various methods of diffusion.