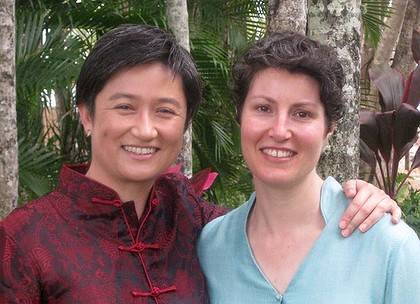 Newly appointed foreign minister Penny Wong has told leaders in Fiji that Australia is an open and willing security partner as concerns grow over the influence of China in the region.
Wong underlined that Australia understood climate change was "real" for the island nations, who would be among the first to be impacted by rising sea levels.
In the wake of nearby nation Solomon Islands signing a security pact with China, Wong said she wishes for Pacific nations to choose Australia as a security partner willingly.
"Our message to the Pacific is clear. We are listening and we have heard you," Wong said in Fiji.
"I'm very pleased that so many Australians voted for stronger action on climate. And I recognise that that has been something Fiji and other Pacific Islander nations have been saying for many years.
"For you, climate change is not abstract. It is not a political argument. It is real."
The implications of greater Chinese influence in the Pacific is not lost on other Western powers.
Following Fiji's decision to join the Indo-Pacific Economic Framework for Prosperity (IPEF) today, the White House issued a statement supporting an "open" Indo-Pacific region.
"A close partner to the United States and a leader in the region, Fiji will add vital value and perspective to IPEF, including on our efforts to tackle the climate crisis and build a clean economy that creates good, paying jobs," the US government said in a statement.
"The future of the 21st century economy is going to be largely written in the Indo-Pacific, and IPEF will help to drive sustainable growth for all our economies.
"The United States thanks Prime Minister Bainimarama, and we look forward to deepening our partnership for the benefit of our countries, the Pacific Islands, and the Indo-Pacific."
The timing of Wong's visit to Fiji – and the nation's entry into IPEF – has curiously come at the same time that Chinese foreign minister Wang Yi is in the area to sign the China-Solomon Islands framework agreement.
The Ministry of Foreign Affairs of the People's Republic of China released a tersely written statement about the visit, effectively arguing that any agreement between China and the Solomon Islands was the business of those two countries, and nobody else.
"Wang Yi stressed that Pacific Island Countries are sovereign and independent states and are not anyone's 'backyard'; both countries have the right to make their own choices, not being subordinate to others," the statement reads.
"Any smears and attacks on China-Solomon Islands normal security cooperation will be a dead end and any interference and sabotage will be doomed to failure."
Posted by Conan Doyle at 2:18 PM