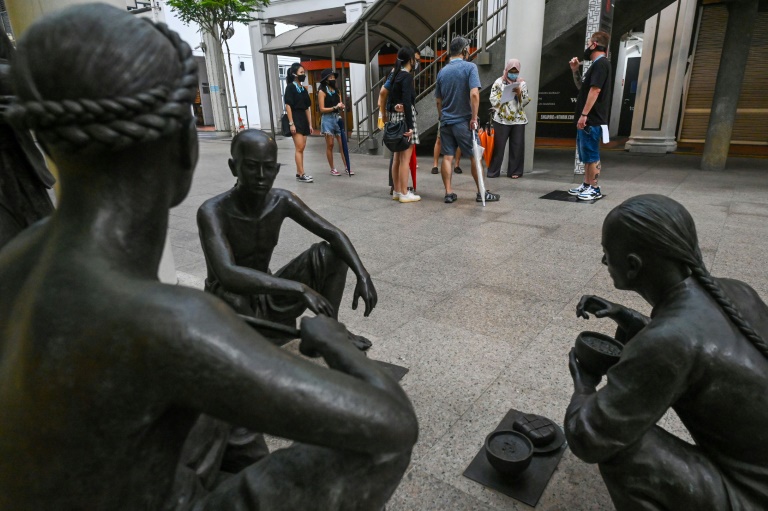 Now known for its clockwork orderliness and having one of the world's lowest crime rates, Singapore was once a gritty port plagued by rival mobsters

SINGAPORE - A reformed gang member points out what were once opium dens and brothels on a tour of Singapore's financial district that explores the squeaky-clean Asian business hub's seedy criminal past.

Now known for its clockwork orderliness and having one of the world's lowest crime rates, the city-state was once a gritty port plagued by rival mobsters.

"This was the headquarters of the biggest gang in Singapore," says tour guide Bruce Mathieu, gesturing at a quiet street now housing restaurants, a hair salon and brightly-coloured murals.

He recalled wandering the area as a child during the 1970s, among street food vendors pushing carts, gambling halls, and the distinctive smell of opium wafting down to the street from illicit upper-floor dens.

Singapore's gangland history traces its roots to so-called "secret societies" formed by Chinese immigrants when they flocked to work in Singapore after it became a key British trading post in the 1800s.

The massive influx from China swelled the city's population, and their descendants now form the bulk of its citizens.

The groups played an important role by providing the army of newcomers with a social network, help finding jobs -- and protection.

"When secret societies, or triads, first started locally in the 1800s, it was more for survival than anything else," said Mathieu, a Singaporean whose mother is from the city-state but whose father is of French descent.

Chinese immigrants had to join secret societies to avoid "getting bullied, getting robbed, getting killed", he added.

The societies were a "prominent feature of life" for the Chinese immigrants, but they also became associated with human trafficking, prostitution, kidnappings, the opium trade, and waves of violent riots, said Jean Abshire, author of "The History of Singapore".

Despite their description, they were far from secret and drew huge followings -- at the end of 1889 they had around 68,000 members, according to a history published by the National Heritage Board.

In the following decades, crackdowns and new laws -- including one that in 1958 gave authorities the power to detain suspected criminals without trial -- cleaned up the city and diminished the gangs' influence.

Since Singapore's independence in 1965, it has undergone a dramatic transformation into a wealthy society and leading financial hub.

Remnants of the gangs live on and criminal cases are still regularly linked to them -- but nowhere near the scale of the past.

Besides sharing historical tidbits, Mathieu candidly recounts his life of crime and drug addiction in the hope it will keep others from making the same mistakes.

The ex-gang member has spent about 20 years in prison for drug possession, robbery, assault, stabbing, theft and forgery.

Corporal punishment is still used to punish some offences in Singapore, and Mathieu also endured 21 strokes of the cane for his crimes.

Members of the tour gasped as the 51-year-old recalled his first gang fight at the age of 12 -- after his friend was stabbed, he ran over to try to stop the bleeding with his t-shirt.

He shied away from specifics about his former gang's activities, but vividly described his initiation ritual to the group.

"I'm kneeling down, there's a guy with a machete on my neck. At any point in time, if I get nervous and recite (a loyalty oath) wrongly... I kid you not, the machete would be brought down."

During his last stint in prison, which ended five years ago, the pain of being separated from his young daughter motivated him to quit drugs and leave his gang.

He now works as a motivational speaker and helps lead the popular "Triad Trails" tour to fight stereotypes about ex-offenders, an initiative partly organised by a non-profit group supporting former inmates.

"My favourite thing is actually the conversation with Bruce," said Gabriel Neo, a 31-year-old banker on the tour.

"How he managed to pick himself up from the lowest point of his life... is a very valuable lesson that I can learn from."

Police smashed the triad initiation ceremony at the bottom of the Tung Chau Street flyover in Sham Shui Po, arrested four men and seized a batch of altar items. The police pointed out that the gang members have simplified their membership ceremonies in recent years, including switching to oral forms.Four men, aged between 42 and 62, were arrested, including a Vietnamese man with street paper, suspected of acting as a triad member, acting as a triad officer and participating in a triad gathering. It is understood that a 62-year-old local man was the host of the ceremony, a Vietnamese man was a new member, and the other two local men were members of other triad organizations who "transferred" during the ceremony.