Anthony Albanese’s deputy leader – Labor’s proclaimed Pacific guru Richard Marles – only months ago argued that island ­nations should be free to hook up in any way they liked with Beijing and dismissed fears about China setting up military bases in places such as the Solomons. 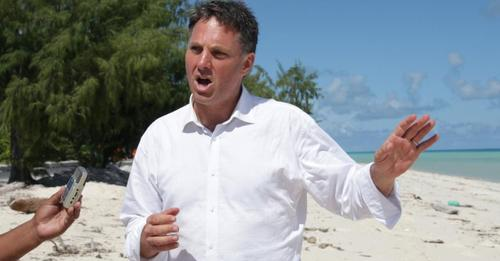 Late last week, a proposed security treaty between China and a tiny chain of islands in the Pacific sent shock waves across the ocean.

The leaked draft signalled that China could deploy troops to the Solomon Islands - and potentially establish a naval base there.

Nowhere was more alarmed than the Solomons' neighbour to the south, Australia - the bedrock regional partner of the Aukus alliance, a new security pact in the Pacific Ocean with the US and UK.

"The details of this deal are still uncertain. But even if it's smaller than the feared military base, it would be China's first foothold in the Pacific," says Prof Allan Gyngell from the Australian Institute of International Affairs.

The Solomon Islands and Australia have long been interlinked. Since World War Two, Australia has been the islands' largest aid donor, development partner and until now the sole security partner.

Australia's government was rocked and likely blindsided by the move, analysts say. Not that it hadn't been warned. Five years ago, Canberra sensed that China was encroaching on its "backyard" with Solomon internal politics at the time also driving up Chinese loans and economic investment.

That prompted Canberra to push back with a "step-up" policy - where it refocused attention on its "Pacific family" and ramped up its own aid flows.

"The objective had to be to stop something like this happening. You can't read it any other way - this is a failure of Australian diplomacy," says Prof Gyngell.

It's not just a big deal for Australia. The Aukus pact, announced only six months ago, is aimed at countering China's ambitions in the Indo-Pacific. The US and other Western allies have all expressed concern about it becoming another potential theatre of conflict.

What is being talked about?

Solomons' Prime Minister Manasseh Sogavare has stridently defended his nation's right to seek security deals with China - on top of existing infrastructure and other business investments.

"We have no intention, Mr Speaker, of pitching into any geopolitical power struggle," he told parliament on Tuesday, saying his nation would not "pick sides".

He has not confirmed if the leaked draft was the finalised version. But the content of that draft was so broad and expansive, it caused immediate alarm.

The agreement set out clauses where China could send navy ships for "stopover and transition" in the islands - raising concerns about a potential military base.

It also allows for Beijing to deploy forces to protect Chinese people and Chinese projects on the islands. The Solomons could request China send "police, armed police, military personnel and other law enforcement and armed forces", according to the draft.

"You have the scope for China to deploy any kind of personnel… and it's not clearly defined the parameters of deployment or the authority those forces would have," said Mihai Sora, a Pacific Islands analyst from the Lowy Institute in Australia.

Compared to the Solomon's only other security agreement - with Australia - it's much more far-reaching.

Australia's arrangement is largely to do with peacekeeping, allowing for a rapid deployment of troops, when requested, to the Solomon Islands, which has a long history of violent unrest.

Last year, it was activated again when deadly riots broke out in the capital Honiara - prompting troops to be sent over from Australia, as well as New Zealand, Fiji and Vanuatu.

The proposed security deal with China could alter the balance in the region.

"Security agreements have significance beyond just the terms they capture. They imply a degree of closeness, co-operation and trust between countries," said Mr Sora.

A Chinese military presence in the Pacific will also completely disrupt the "benign" environment that's been enjoyed by nations for decades - and which is currently collectively maintained by Australia, New Zealand and the Pacific Islands Forum nations.

Australia has raised concerns on how it could "undermine the stability and security of our region", while New Zealand spoke out against a "potential militarisation of the region".

Analysts say the threat of China on Australia's doorstop isn't about invasion; it's about much more immediate short-term concerns, such as Beijing improving intelligence gathering and monitoring.

Even a small Chinese military presence giving it a foothold in the South Pacific would be a consideration for Australia and a potential drain on its military resources.

"It's not so much about what would China's base in the Solomon Islands contribute in a time of conflict - we're nowhere near that," said Mr Sora.

"When you establish a military presence in a region, it excludes that region, excludes access to that region for other countries."

He said a worst case scenario could be an escalation in tensions to the dynamics of the South China Sea, where Beijing has built artificial islands in contested waters and placed military installations on them to deny passage for other nation's naval and air forces.

"Up until now, Australia and other Pacific countries have enjoyed being in a benign zone and having the freedom to move within our zone in the Pacific.

"So this brings in a clear, hard strategic edge to that competition."

Ramos-Horta, who spent decades as the exiled spokesperson for the guerrilla movement during Indonesian occupation, previously served as president from 2007 to 2012 and prime minister and foreign minister before that.

Thousands travelled to watch the inauguration in the capital Dili, with the 72-year-old sworn in just before midnight in a ceremony replete with fireworks and cannon fire.

The new president said he would represent all Timorese, and seek to rebuild national unity after a protracted political impasse in the parliament.

Ramos-Horta, who won a decisive victory in a second round of voting last month, said ties with Indonesia, Australia, and the region should be at the top of the national agenda, and that relations with China would be strengthened.

"It is our intention to expand bilateral cooperation with China," he said.

He said he would push for greater food security and propose creating a coffee fund to protect farmers against global price fluctuations.

One of the most oil-and-gas dependent countries in the world, the half-island nation of 1.3 million people has grappled with diversifying its economy and reducing high rates of poverty.

While he ran in the presidential elections as an independent candidate, Ramos-Horta was backed by the National Congress for Timorese Reconstruction (CNRT) party, which is headed by former president and prime minister Xanana Gusmao.

Gusmao has strongly promoted the Tasi Mane project, which would see oil and gas from the Greater Sunrise field developed onshore, and with China touted as a potential developer.

Ramos-Horta also said he would continue to foster a special relationship with the United States, and advocate for East Timor to join the Association of Southeast Asian Nations (ASEAN).

The inauguration ceremony on Friday marked 20 years since the restoration East Timor's independence.