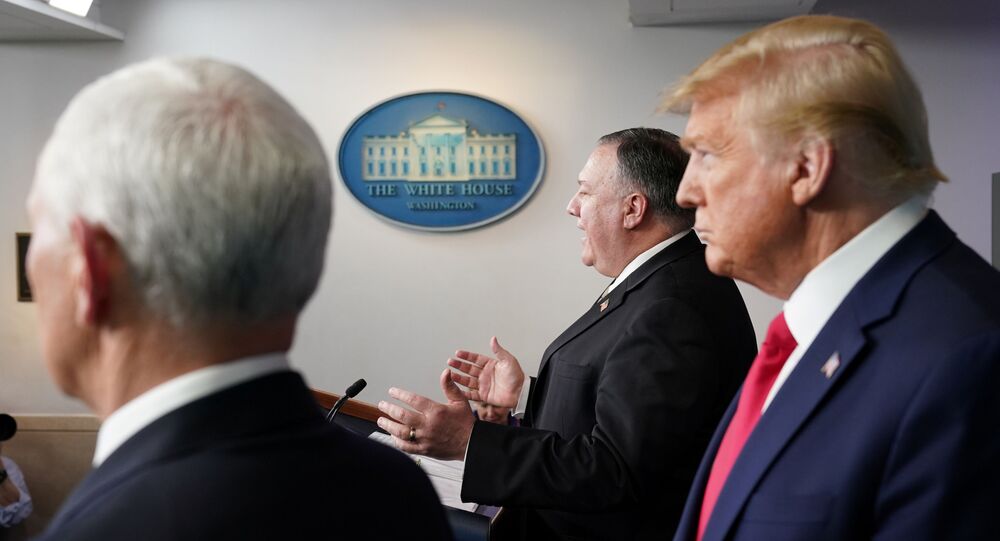 Five Eyes and US spies' stance on the origins of the coronavirus outbreak clearly contradicts the White House's Wuhan lab theory. American and British academics have explained what is behind the apparent discord between Trump and the US intelligence community.

President Donald Trump is at odds with the Five Eyes – an intelligence alliance consisting of Australia, Canada, New Zealand, the UK, and the US – over the origins of COVID-19. Neither American nor other Anglophone spooks share Trump's idea that the virus came from a virology lab in Wuhan, despite Secretary of State Mike Pompeo's assertion that the claim is based on "enormous evidence".

The theory apparently popped up in mid-April after The Washington Post published leaked diplomatic cables signalling concerns over the Wuhan Institute of Virology's coronavirus studies and safety. In early May, the Australian newspaper The Daily Telegraph quoted a 15-page "dossier prepared by concerned Western governments" about China's "bat virus programme" in Wuhan and an alleged inquiry by Five Eyes into the matter. However, Five Eyes member states and US intelligence analysts threw the attempt to link the virus to China's biosafety mistakes into question assuming that COVID-19 more likely originated in a Chinese market. For its part, the Australian government concluded that the "dossier" in question was not a Five Eyes document but a compilation of open-source materials.

"Trump has an on-again, off-again relationship with the US intelligence community", says Paul Poast, associate professor in the Department of Political Science at the University of Chicago. "In the case of the possibility of COVID-19 originating in a lab in China, the intelligence community is skeptical".

Nevertheless, it appears that Trump does not care much about the intelligence community's skepticism, according to the academic: "What ultimately matters for him is placing as much blame on China as possible for the economic hardship being experienced in the US", he opines.

"The 'created in a lab' story is just one of several angles he is taking to blame China for the issue", Poast observes. "Other angles include emphasising the Chinese government's poor initial response to the crisis and the pressure China placed on the WHO".

Trump's Strengthening Positions Ahead of 2020 Vote

"By insinuating that China deliberately released the novel coronavirus, Trump fuels a media narrative in which the focus is on China, not on the mishandling of the pandemic by the Trump administration", says Dr Rubrick Biegon, a lecturer in international relations at the School of Politics and International Relations of the University of Kent. "The controversy generated by these fairly outlandish accusations, which directly contradict the position of his intelligence agencies, serves to deflect attention from the federal government’s poor response to the public health crisis".

In addition, Trump’s political style, and much of his appeal to his supporters, is based on perceptions of him as an embattled outsider willing to take on the "deep state", Biegon elaborates.

However, "by publicly contradicting his intelligence agencies, he shows that he is not in control of his administration, and this may make him seem weak or ineffective with a certain section of the electorate", the lecturer suggests.

The academic says that the American intelligence agencies "are bureaucratic institutions embedded in the American state". While their aim is to ensure the country's national security, it is "not clear whether Trump himself has a coherent conception of the US national interest", Biegon argues.

"What is clear that Trump is behaving in a way that he feels strengthens his position ahead of the 2020 election", the academic believes.

Donald Trump's relationship with the US intelligence community has been strained since the beginning of his presidency due to Special Counsel Robert Mueller's investigation into the alleged collusion between the Trump campaign and Russian officials, something that both Moscow and Trump resolutely denied. The Mueller investigation, which was repeatedly denounced by Trump as "witch hunt", found insufficient evidence that President Trump's campaign coordinated with Russia. Ex-National Security Adviser Michael Flynn became the first Trump aide to be charged under the US intelligence community's probe into the Trump campaign.

On 7 May 2020, the Department of Justice dropped the case against Flynn following the disclosure of explosive documents allegedly implicating the FBI. Trump called the FBI's handling of investigation into Flynn "treasonous". In 2019, Attorney General William Barr initiated a probe into Operation Crossfire Hurricane conducted by major US spy agencies against the Trump campaign during the 2016 election cycle. Barr appointed US Attorney John Durham to do the job.