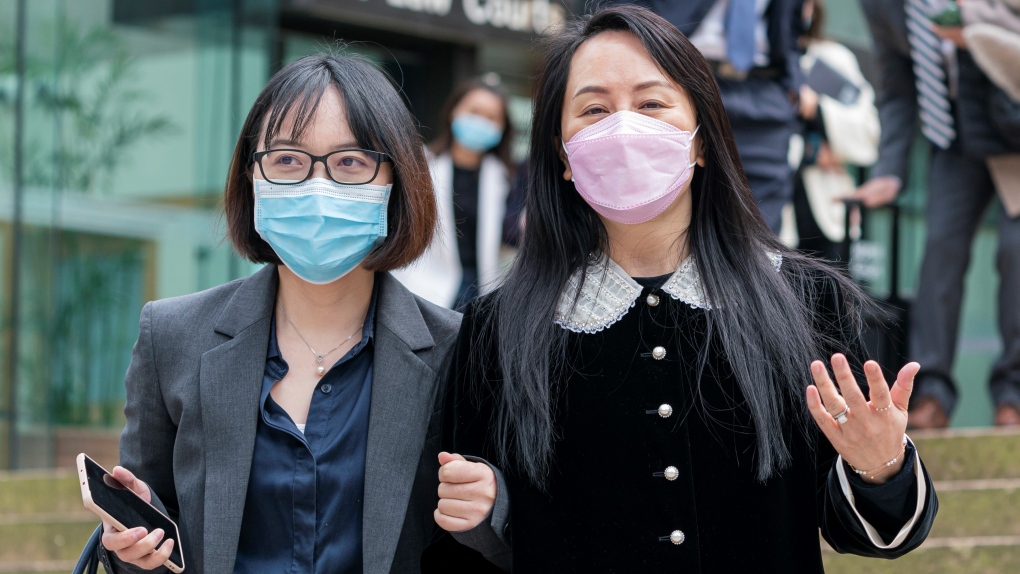 VANCOUVER -- The extradition case against Huawei executive Meng Wanzhou has an “overwhelming” connection to the United States, a lawyer for Canada's attorney general has argued.

Robert Frater responded in British Columbia Supreme Court on Thursday to arguments made by Meng's lawyers that the case violates international law and should be tossed.

“The flaws in their argument run so wide and so deep, I scarcely know where to begin,” Frater told the judge.

The United States is seeking Meng on fraud charges over alleged lies she told HSBC about Huawei's relationship with another company, Skycom, that was doing business in Iran. She and Huawei deny the allegations.

Her lawyers have said Meng is a Chinese national, HSBC is an English-Chinese bank and the meeting between them happened in Hong Kong, so the United States has no jurisdiction to charge her.

However, Frater said the entire point of the meeting was to assuage HSBC's concerns about violating American sanctions against Iran through its business with Huawei.

The meeting in 2013 followed the publication of Reuters articles that alleged Skycom was selling American-made computer equipment to Iran's largest mobile-phone operator and that Skycom was controlled by Huawei.

He said Meng showed a PowerPoint to the HSBC executives that said Huawei was conscious of the sanctions and was complying. The presentation was designed to falsely distance Huawei from Skycom, he said.

“There is no reason to have this meeting if it is not about reassuring HSBC that it can continue to provide banking services to Huawei - in particular, we would say, U.S. banking services,” Frater said.

“The overriding message is: 'If you continue to provide U.S. banking services, you will not incur any legal risk.' It is a strong prima facie case, in our submission, that Ms. Meng knows what she is doing.”

Meng's lawyers have argued that the only connection the United States can claim to the case is that $2 million in payments between a HSBC client and Skycom were cleared in American dollars through the country's financial system.

Her lawyers told the court the practice of “dollar clearing” is not sufficient for the United States to claim the “genuine or substantial” connection to the alleged crime necessary under international law.

Frater responded that the case is about much more than dollar clearing, and must be seen through the lens of the offence Meng has been charged with: fraud.

Fraud is not just about the lie, it is about the risk of deprivation or economic loss, he said.

HSBC was on a deferred prosecution agreement in the United States for previously breaching sanctions against Iran. Violating that agreement put the bank at risk of civil and criminal penalties, Frater said.

Both HSBC's American subsidiary and the United Kingdom arm are listed on the deferred prosecution agreement, he added.

The bank is a multinational financial institution, he said, with a global risk committee that decided to continue its relationship with Huawei after the meeting with Meng.

Frater said the judge's responsibility is to determine whether or not to commit Meng for extradition. The final decision to surrender her to the United States rests with the federal justice minister, who should be the one to weigh issues of jurisdiction, he said.

He also criticized a claim by the defence that Meng is being detained illegally. If her lawyers genuinely believed that to be the case, they should have made that argument two years ago, he said.

Meng was arrested while passing through Vancouver's airport in December 2018 and is out on bail, living in one of her two multimillion dollar homes in the city.

Her lawyers argue that the extradition proceedings are an abuse of process and should be stayed.

Gib van Ert told the court Meng's legal team has worked very hard to move the case along as expeditiously as possible.

The judge does not need to wait for the minister to decide whether the United States has jurisdiction to prosecute, van Ert said.

“In this country, no unlawful detention is outside the power of a superior court,” he said.

“The detained person need not depend on the political process rather than a legal process to liberate her from a wrongfully procured detention.”

The court adjourned Thursday until April 26, when the final phase of the process, including an extradition hearing, will begin.