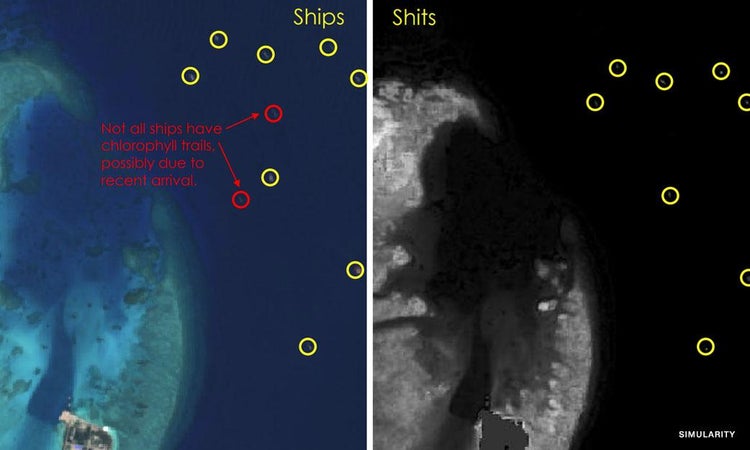 Simularity, in a report released on the fifth anniversary of the Philippines' arbitral win against China on Tuesday, said the crews of the hundreds of anchored ships continue to dump human waste and sewage in the reefs.

"Sewage effluent sources in the Spratly Islands include ship wastewater and human habitation without sufficient sewage treatment. When the ships don’t move, the poop piles up," it said in the report with the hashtag #ChinaStopShittingOnTheSpratlys.

It reported that sewage discharge led to increase in chlorophyll A pigment, as evidenced by satellite imagery taken in mid-June. This was also seen in the Union Banks or Pagkakaisa Banks, a group of features in the Kalayaan Island Group — which the Philippines considers part of Palawan province.

It said chlorophyll A concentration leads to excess phytoplankton which cannot be consumed by the reef inhabitants, so they die and sink to the sea floor to be consumed by bacteria. These bacteria consume oxygen that would normally be available to the fish, creating a "dead zone" for marine life.

Simularity warned that damage to the reefs directly affects the fish stocks of the entire South China Sea, where the Philippines, Brunei, Malaysia, Taiwan, Vietnam have claims, but is mostly contested by China. The ceaseless dumping of raw sewage may lead to a hunger crisis and a collapse of commercial fishing as the size of fish stock in the disputed waters is directly linked to the health of its reefs.

The report said this "catastrophe of epic proportions" will take the reefs decades to recover even with active mitigation.

"The damage to the reefs in just the last five years is visible from space. This time period is after and therefore in addition to the well-documented reef destruction wrought by China’s giant clam harvesting and artificial island building," it said.

When asked for a response, the Chinese Embassy only pointed out the report's use of an old photo taken in Australia. The report used the photo as an illustration of phytoplankton and algal blooms caused by excess nutrients in water.