China will send a powerful telescope into space this autumn on a four-year mission to capture never-before-seen images of the sun during its stormy season, which will help scientists understand solar flares and other violent space weather.

The Advanced Space-Based Solar Observatory (ASO-S) is expected to launch on October 20 from the Jiuquan Satellite Launch Centre in the Gobi Desert, according to a researcher familiar with the project.

It will join an international fleet of sun-gazing telescopes in space, including Nasa’s Parker Solar Probe and the European Space Agency’s Solar Orbiter, to closely watch the sun as it nears the next solar maximum, a period of high solar activity expected to peak around 2025.

China launches twice in under two hours and conducts spacewalk 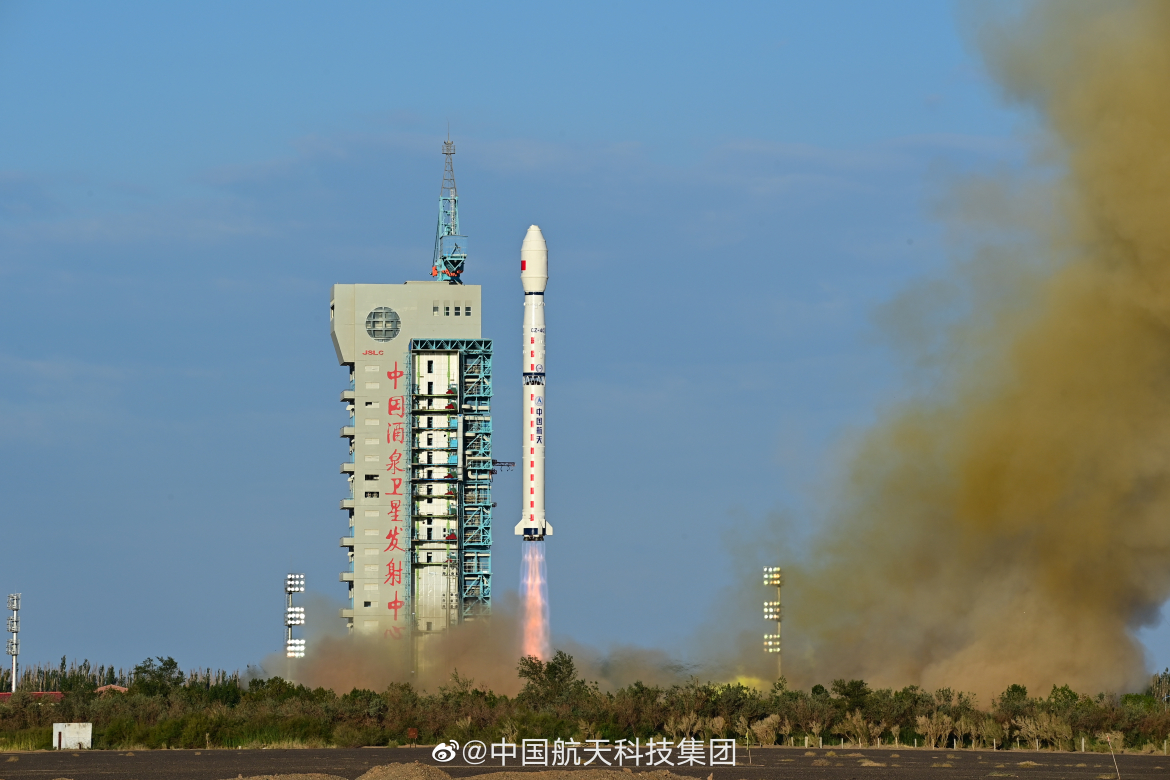 A few busy days are behind the Chinese space program. Not only did three orbital launches occur from China, but also, the Shenzhou-14 crew performed an EVA outside of the Tiangong space station. Additionally, a newly shared photo of the Chinese ZQ-2 rocket shows a close race against the American Terran 1 and Starship vehicles to be the first methane-fueled rocket in orbit.

On September 2 at 23:44 UTC, China conducted a Yaogan launch out of Jiuquan. The launch vehicle was a Chang Zheng 4C, which brings the Chang Zheng 4 family just seven flights away from the 100 launches milestone of 100 launches.

The satellite itself is part of the Yaogan Weixing line, which is similar to the “USA” and “Kosmos” satellites of the US and Russia, meaning they are classified military satellites that are officially labeled “remote sensing satellites.” This is also the official purpose that was given for this payload. 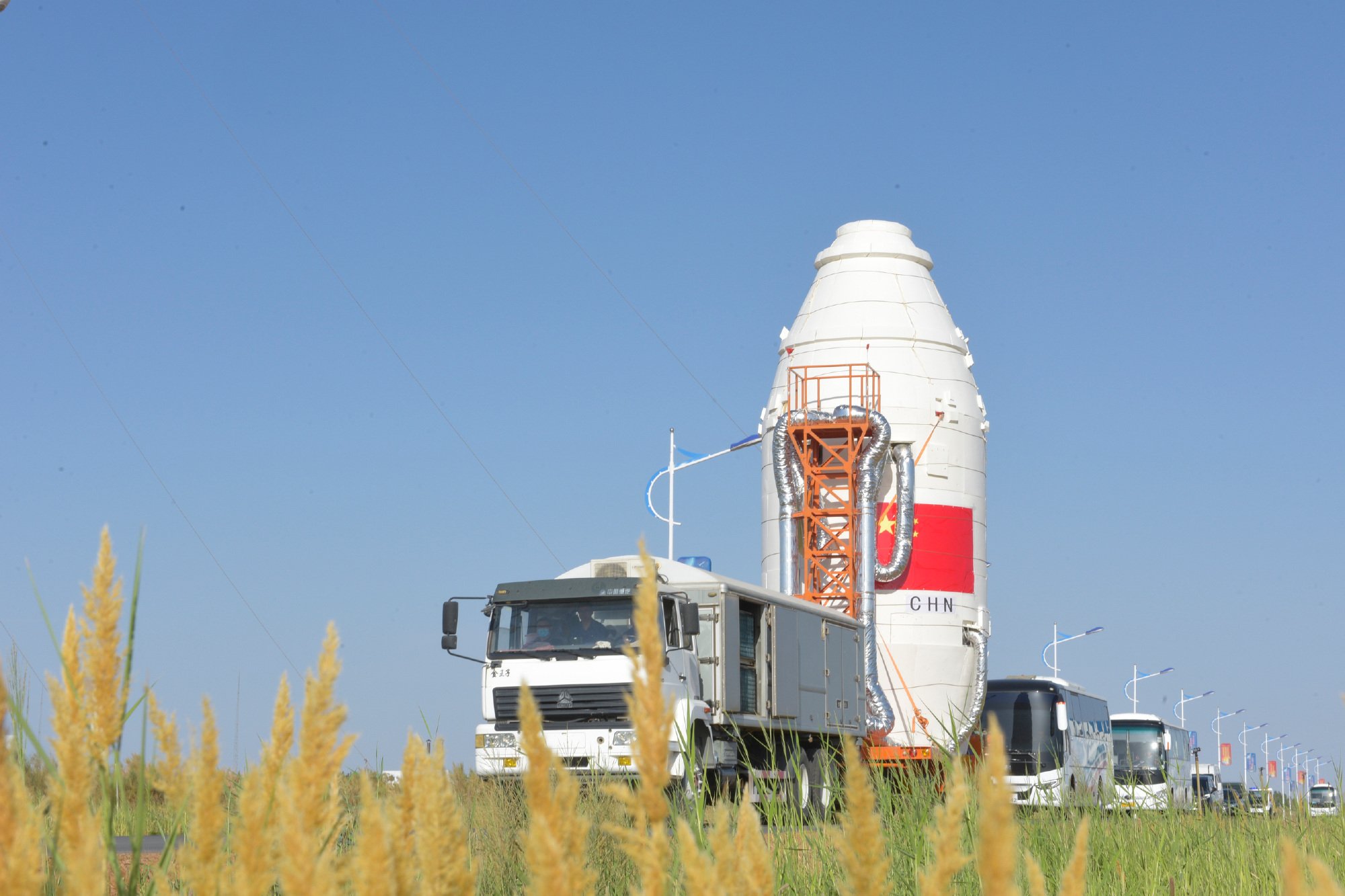 The Yaogan-33-02 payload during transport.

Because the satellite serves a military purpose, the real mission is secret. However, it is labeled for “scientific experiments, land resources surveys, crop yield estimation, and disaster prevention and relief.” This is common reasoning used for the Yaogan payloads.

Both the satellite and the rocket are constructed by the Shanghai Academy of Spaceflight Technology (SAST), which is part of the China Aerospace Science and Technology Corporation (CASC).

The payload was deployed into a 680 x 688 km Sun-Synchronous Orbit (SSO), which underlines the fact that the satellite is probably optical, as this orbit will allow the satellite to have comparable imagery of the same areas over time.

The Chang Zheng 4C was used for launch. It’s a three-stage rocket that can lift up to 4,200 kg to a low Earth orbit (LEO) and 2,800 kg to today’s SSO orbit. So far, this particular configuration has launched 45 times with two failures.

The rocket is an upgrade from the Chang Zheng 4B and was initially called Chang Zheng 4B-II. Later it was rebranded as Chang Zheng 4C, with the difference of a restartable upper stage and the capability to launch bigger payloads.

On September 6 at 02:24 UTC, the second launch took place with a Kuaizhou-1A rocket launching the CentiSpace-1 S3/S4 payloads from Jiuquan. The launch was confirmed a success and occurred nominally.

The payloads are two new test satellites. The first CentiSpace-1 satellite, S1, was launched in 2018 on the same rocket configuration, while the second payload failed on a Kuaizhou-11 in July 2020. 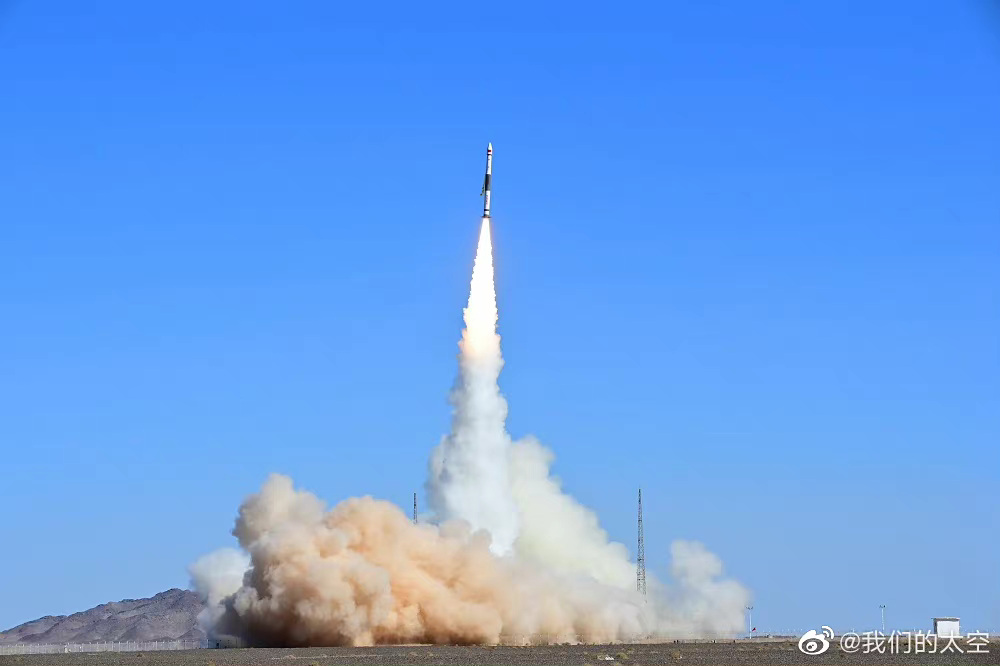 For this launch, the satellites are made by Future Navigation, a Beijing company. At least for the previous iteration, they used the WN-100 bus by CAS micro space as a platform and tested all kinds of navigation and satellite technologies, such as laser inter-satellite communication links. This is a similar communication technology to that being used on the SpaceX Starlink constellation.

The first generation of the satellite had a mass of 97 kg and went to a 693 x 705 km orbit with a 53.53-degree inclination. This is comparable to the orbit of the CentiSpace-1 S1 payload, which went to the same altitude, but had a different inclination.

The KZ-1A rocket is a solid-fueled small launcher, outfitted with three stages of solids and one liquid stage for the final orbital adjustments. It is built by ExPace, which is a government-owned company and subsidiary of the China Aerospace Science and Industry Corporation (CASIC).

This was the 17th launch of the KZ-1A rocket, with 15 of these being a success. The last launch of the company was only weeks ago, with the Chuangxin-16 payload, onboard the same rocket configuration, on August 23.

Only one hour and 55 minutes after the KZ-1A launch, a Chang Zheng 2D launched from Xichang with another Yaogan payload. The launch time was 04:19 UTC, and it was confirmed that three payloads were on the rocket.

These kinds of Yaogan triplets have been seen on previous launches as well, and so far it is not clear what they are used for. They went to a 500 km altitude orbit with a 35-degree inclination. The official use is the same as the 4C payload of the earlier launch—remote sensing.

This is the fifth time a group of Yaogan triplets was launched. The first one launched in November 2021, and the last one launched just weeks ago on the same rocket configuration. The satellites are built by DFH Satellite. 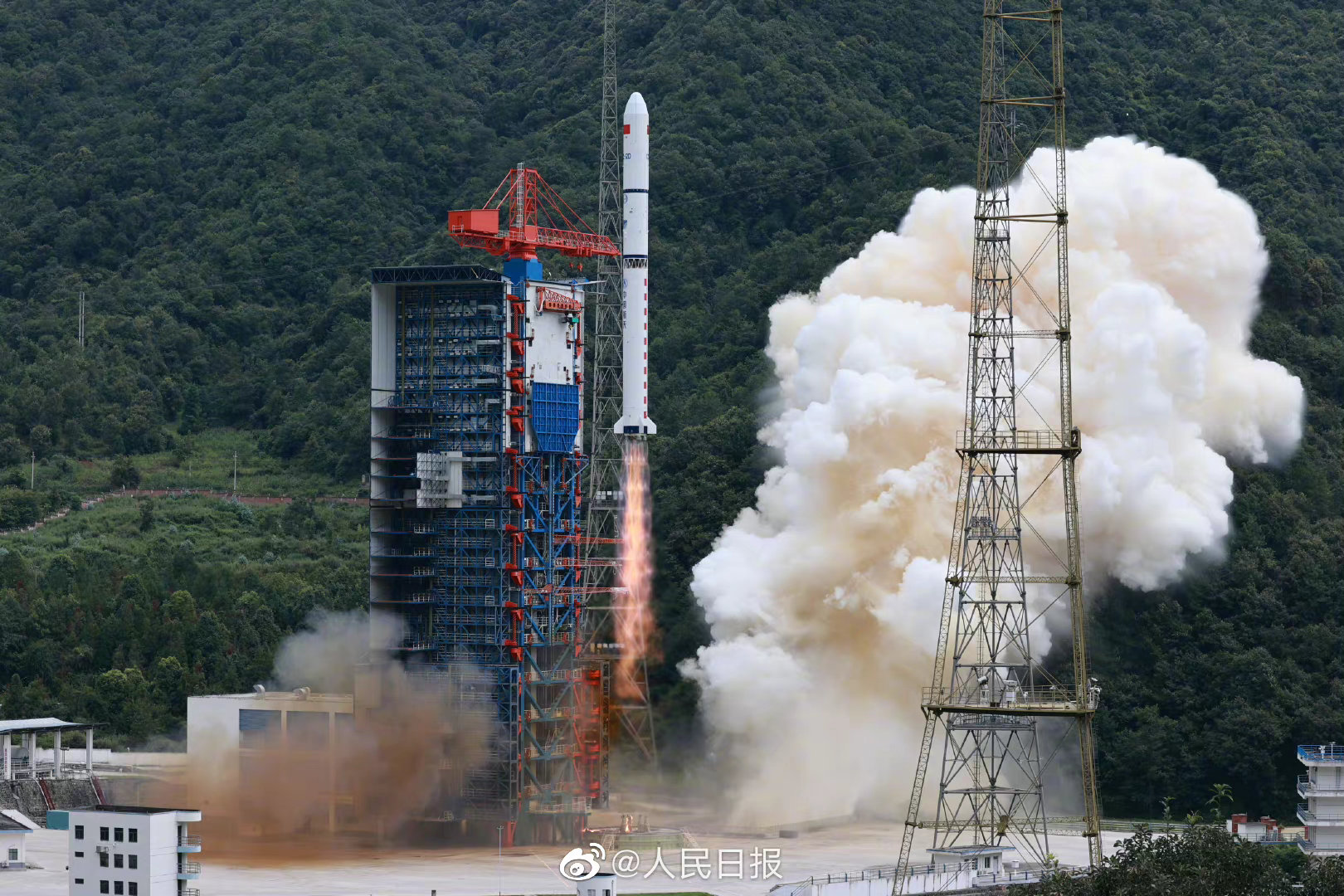 Its engines are fueled by nitrogen tetroxide and unsymmetrical hydrazine, which is a common fuel mix in early Chang Zheng vehicles of the CZ-2, CZ-3, and CZ-4 families.

On September 1, Chen Dong and Liu Yang conducted an EVA outside of the Tiangong Space Station, while Cai Xuzhe stayed on the station. They left the station at 10:26 UTC, and the EVA took until 16:33 UTC to be completed.  This was the first time the airlock of the recently launched Wentian Module was used to initiate an EVA, as well as the first time the five-meter-long remote control arm of the Wentian module was used.

Part of the EVA was to install heat control pumps on the Wentian module, a wide-field panoramic camera, and a variety of other tasks. Part of the EVA was also to verify the function of the recently installed Wentian Airlock and test procedures for an emergency abort of an EVA.

ZQ-2 is a rocket built by the private company LandSpace, which is a methane-based medium-lift rocket that can lift up to 4,000 kg into orbit. It is not clear if the rocket at the pad is a pathfinder or the actual flight prototype, but a recent picture posted by the company suggests that it might be the actual flight hardware.

Because the first pathfinder is visible on satellite imagery at a different location, it either has to be a second pathfinder or the actual flight rocket.

The rocket is in a close race with Relativity Space’s Terran 1 and SpaceX’s Starship to be the first methane-based rocket in orbit. The launch of ZQ-2 is not expected to occur any earlier than October. 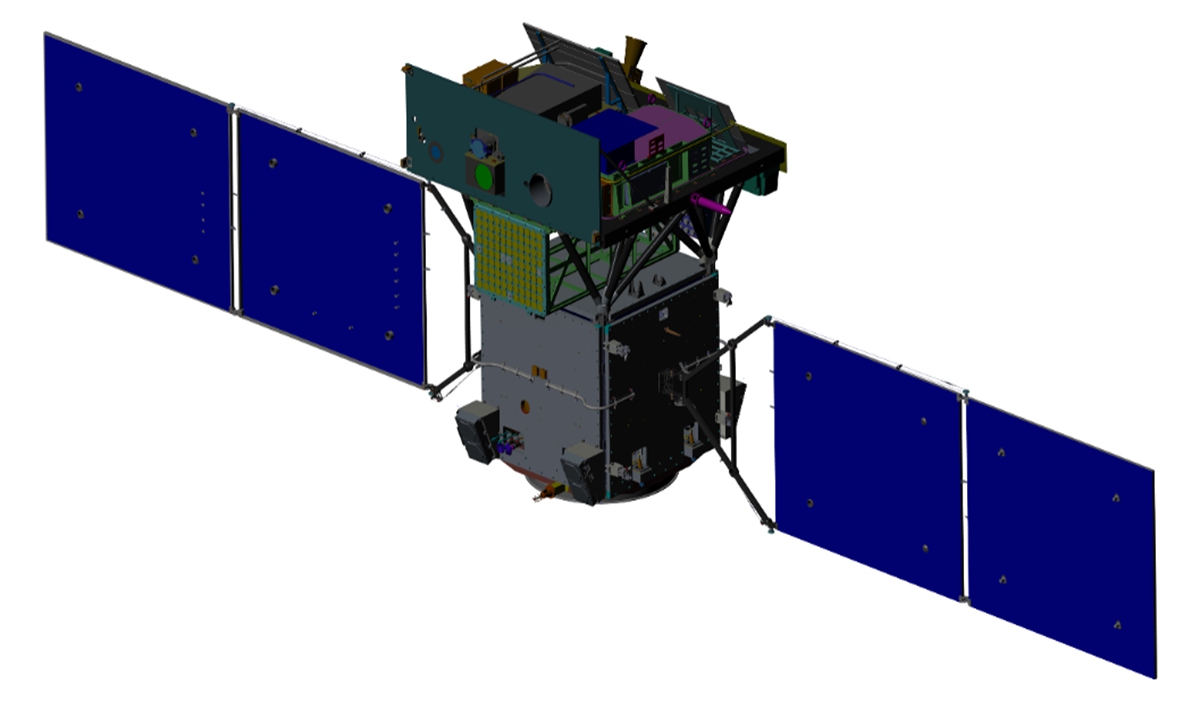 Tests on the prototype of China's first space-borne comprehensive solar observation satellite will come close to completion by the end of January, and the spacecraft is expected to be launched by 2022, according to Gan Weimin, chief scientist with the program.

The satellite, codenamed Advanced Space-based Solar Observatory or ASO-S, is tasked with conducting long-term continuous solar observation for at least four years, and its main scientific goals include the formation of solar magnetic field, solar flare and titanic blasts known as coronal mass ejections, as well as their relationship in a simultaneous fashion, Gan, the program leader and research fellow with the Nanjing-based Purple Mountain Observatory under the Chinese Academy of Sciences (CAS), told the Global Times during an exclusive interview.The simultaneous observations could yield clues as to how those eruptions are triggered, he noted.To achieve the set goals, the ASO-S will carry three payloads onboard - the Lyman-alpha telescope (LST), Hard X-ray telescope (HXT) and Full-disk solar vector MagnetoGraph (FMG,) according to the observatory.Due to the Earth's atmosphere, most solar radiation is absorbed before it reaches the ground, which is why in order to get a full spectrum of solar radiation, especially those with high energy such as X-ray and gamma ray, the solar observation platform needs to go to space, Gan explained, responding to questions from curious Chinese space enthusiasts on why we need to go to space for the solar mission.China's solar research satellite will be working in the Earth's polar orbit some 720 kilometers above ground, so that it will be capable of conducting 24-hour continuous observation directly on the sun, with a rather short communication delay, according to Gan.Also, as the Chinese probe is flying in an Earth orbit rather than a higher one, the satellite can carry heavier and therefore more powerful payloads. For example, the HXT onboard the ASO-S weighs over 160 kilograms, much heavier than the X-ray telescope carried by the European Space Agency's Solar Orbiter, which is about 6 kilograms. 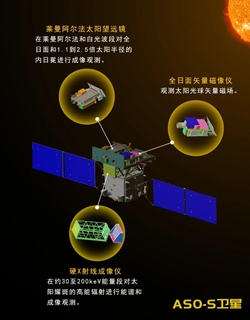 NASA launched the Parker Solar Probe in 2018, which adopted a rather bold method of being the first to fly directly through the Sun's corona - the hazardous region of intense heat and solar radiation in the Sun's atmosphere that is visible during an eclipse. But the US probe, admittedly revolutionary, cannot yet look into the sun directly all the time, as the telescope instruments cannot withstand the heat of over 5,000 C, therefore its observations will be not as continuous as the ASO-S', Gan said.When asked why the Chinese scientists chose 2022 for the ASO-S launch, Gan said that 2022 would be the beginning of a new 11-year solar cycle, and the ASO-S will hopefully record rising stages of solar stormy activities and cover the peak period by around 2024-25, within the four years of designated operation life. During the solar cycle, the Sun's stormy behavior builds to a maximum and its magnetic field reverses. Then, the Sun settles back down to a minimum before another cycle begins.According to NASA, the Halloween Storms of 2003 "were the scariest of all," as the most powerful solar storms ever recorded led to incidents such as power outages in Sweden and GPS deviation on a global scale, and also affected satellite systems and communications.Understanding the formation of and relationship between the solar magnetic field, solar flare and coronal mass ejections would help establish a space weather forecast system, which could report solar storms around two days in advance, Gan said.
Results unveiled for China's 1st solar observation satellite 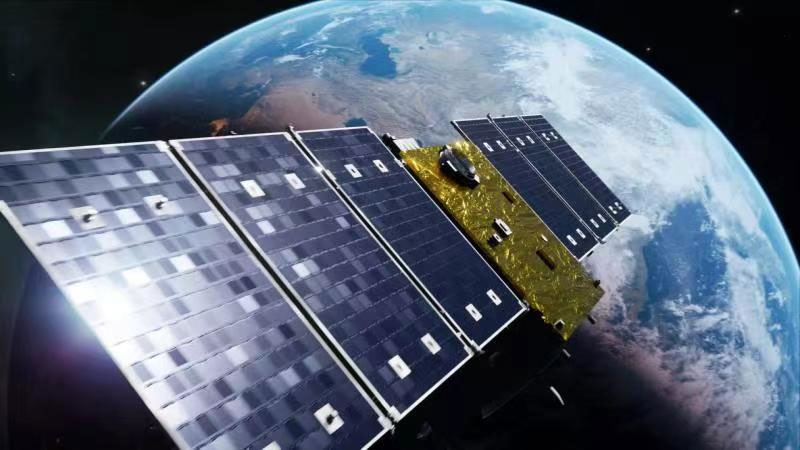 A render of the Xihe satellite

China has released the results of its first solar observation satellite named "Xihe" with breakthroughs in technology verification and data shared with the international community.

The satellite has obtained the world's first H-alpha spectral scanning imaging with ultra-precision after observation on almost 100 solar burst activities since it was launched into a sun-synchronous orbit kilometers above the Earth in October 2021.

"It is like a deep CT scan to the entire sun. And it aims to find the physical laws of the solar atmosphere and the solar activities," said Ding Mingde, chief scientist of Xihe solar observation satellite. "It will help us prevent the harms that the solar activities might bring to us."

The satellite made two key breakthroughs of "ultra-precision" and "super stability," according to Chen Jianxin, general director of the Xihe satellite. "It increases one to two orders of magnitude compared with any satellites we are using now. That means a better environment for the payload of camera which enables better images."

And the probing results are open to scientists around the world and can be downloaded from the official website.

"Solar probe is the common cause of all human beings. We must take advantages of these data and resources to provide the bountiful research materials for the solar physicists around the world," said Zhao Jian, director of Earth Observation System and Data Center, China National Space Administration. "This will help them find better scientific discoveries and better serve the human society."