China has recently claimed the entire Galwan Valley as its own. New Delhi rejects Beijing's claims. But a deeper analysis of satellite imagery shows China also altered the Galwan river's ecosystem to claim the area. Twenty Indian soldiers were killed in a violent face-off with Chinese troops in the Galwan Valley on Monday.

At a time when the Gawlan Valley is in focus following the death of 20 Indian soldiers in a violent face-off with Chinese troops and China now staking territorial claims over the entire Galwan Valley, analysis of satellite images shows that for long, China has been altering the Galwan river's ecosystem to gain an upper hand in the region.

Analysis of satellite imagery explains how China altered the Galwan river's ecosystem to eventually claim the region as its own.

Satellite images from 2010 clearly show that the entire Galwan Valley was a very narrow stretch without any road infrastructure.

The Chinese started building roads with compressed earth surreptitiously in 2015-2016. Satellite images then showed only a single hut without any troop deployment there.

But, in May this year, the People's Liberation Army (PLA) barged into this area under the pretext of a military exercise and has been amassing troops all along the sides of the river, right up to the LAC.

The Chinese soon realised that there is no space for deployment of a large force along this waterway. Chinese engineers then thought of a unique method of claiming-- by canalising the Galwan river deeper with dozers and JCBs in order to restrict its size. Many foreign and Indian media outlets claimed the PLA blocking the Galwan river with dozers, which led to rumours of flooding Indian positions downstream on the night of June 15, 2020.

The block seen on June 16 obviously couldn't have flooded any area downstream a day before.

The dozer observed in satellite images of June 16 is actually creating a channel on the northern bank of the river so that requirement of two bridges is avoided. 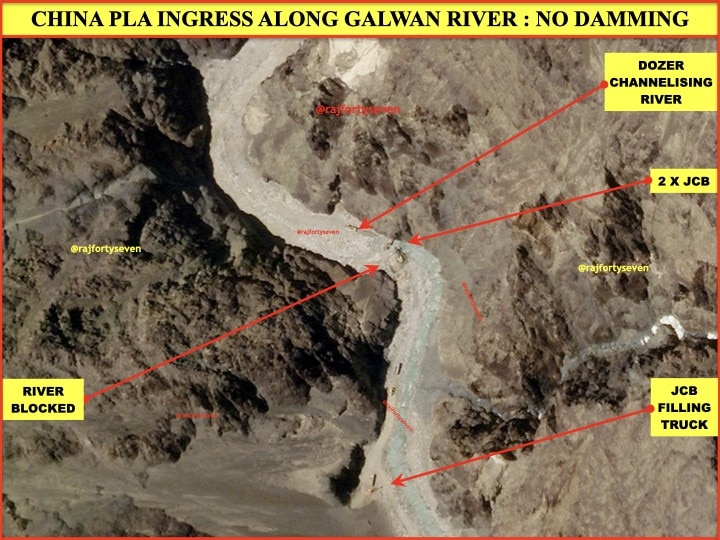 The images very clearly indicate the Chinese claiming the sides of Galwan river, all along right up to 40 kms from the LAC, without paying any heed to ecology of the area or the river.

The earth required for this is dug out from mountain sides without considering long term geological effects of such acts. Water-logging is seen in areas claimed, which over a period of time would dry up or could be pumped out.

The Chinese engineers at work near the LAC are changing the course of the river and also reducing its width so that larger land mass can be claimed for deployment of troops and construction of permanent infrastructure in the future. The importance of this location increases because the road from Darbuk to Shyok to Daulat Beg Oldie, the Indian landing strip, runs parallel to the Shyok river along its western bank.

The recent escalation is, therefore, widely seen as a PLA ploy to control not only this territory but also stop Indian infrastructure construction move towards the LAC. The recent satellite images of May 29 showed a massive build-up of Chinese troops about 40 km east of the Galwan conflict point. The PLA's nefarious activities were exposed by India Today TV on June 18, 2020.

China's has its own expertise in reclamation. It displayed to the world very vividly how they reclaim areas even in the deep ocean.

The People's Republic of China reclaimed more than 3,200 acres in the South China Sea within a matter of 18 months, which left the entire world surprised.

Eastern Ladakh has been a part of India since a very long time.

During the British era, many expeditions also traversed over this barren areas to claim sovereignty.

The recent Galwan standoff has brought to fore the importance of Galwan river for both India and China which are claiming territorial rights over Eastern Ladakh or the Aksai Chin area, which Beijing occupied in the 1950s and expanded its claims further in 1962.

What unravelled this month also indicates that the PLA is here to stay permanently and would certainly build modern road and housing infrastructure within a short span of time.

(Col (Retired) Vinayak Bhat is a consultant for India Today. A satellite imagery analyst, he served in the Indian Army for over 33 years.)

ALSO WATCH | Exclusive details of Ladakh face-off: Clubs wrapped in barbed wire, stones used to attack Indian soldiers
IndiaToday.in has plenty of useful resources that can help you better understand the coronavirus pandemic and protect yourself. Read our comprehensive guide (with information on how the virus spreads, precautions and symptoms), watch an expert debunk myths, and access our dedicated coronavirus page.
Posted by Conan Doyle at 5:27 PM