A funny thing happened… In the late 20th century, traditional media was all powerful and saturating.

A funny thing happened… In the late 20th century, traditional media was all powerful and saturating.1 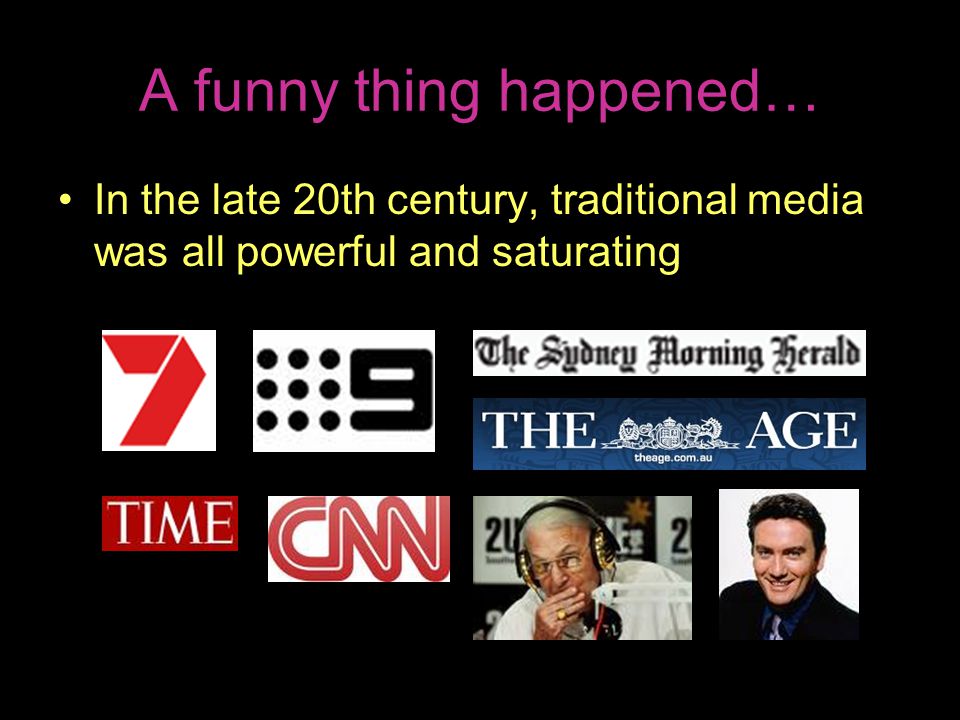 2 A funny thing happened… In the late 20th century, traditional media was all powerful and saturating


4 A funny thing happened… Newspapers were “rivers of gold”


5 A funny thing happened… The “media” controlled the message. Governments implemented media ownership laws to stop one individual or group becoming too powerful “You can be Prince of the Papers or Queen of the Screen, but you cannot be both”


10 A funny thing happened Now society is becoming engaged with itself again Communities of interest have sprung up everywhere Activism has found a new voice http://www.youtube.com/watch?v=VDWqQSgCgH0


11 The “long tail” phenomenon Traditional media tries to get a single message out. A “sound bite” New media allows you tailor the information you want to read or the audience you want to reach… To a ridiculous level of detail http://blog.makezine.com/archive/2007/04/how_to_make_a_luxury_ant.html
12 The “long tail” phenomenon
13 For example, while an individual blog may only have six readers, small blogs have more readers combined than the largest media websites What about for environmental managers? Isn’t most of the information we need in the long tail? What about farmers? Bureaucrats and planners?
14 What does this mean for you? Find your voice Thrive in the information overloaded world –More efficient in managing information –Survival skills for 21 st Century More complex, detailed information to be created and distributed at relatively low cost Interact easily and cheaply Communities of interest can spring up, not limited by geographic closeness
15 Learning with the Fang Note to self: Mike has immersed himself in this world for three years and is participating in debates on where it goes next If he goes too fast – yell out!
16 What do you need to leave with? You need to be able to write a blog You need to be able to read more than one feed per day for two weeks through an RSS reader You need to have an awareness of the power of this new set of tools Question: Are we committed to spending two weeks writing a post a day?
17 Extra learning Comment on other blogs and participate in conversations Use RSS to pull in multimedia files –Text, audio, video, images Have ideas on how to use these tools to participate in communities of interest Have ideas on how to use these tools to build communities of interest
19 Blogs are messages An email is a message sent to a defined audience A blog is a message left for the world to read, which invites comment back
20 Blogging Number of blogs is growing exponentially
22 RSS RSS (Really Simple Syndication) is used to publish frequently updated content such as blogs, news or podcasts. RSS makes it possible for people to keep up with their favorite web sites in an automated manner that's easier than checking them manually. RSS content can be read using an "RSS reader". You subscribe to a feed by entering the feed's link into the reader or by clicking an RSS icon in a browser that initiates the subscription process. The reader checks the user's subscribed feeds regularly for new content, downloading any updates that it finds.
24 Podcasts Podcasts are audio recordings that can be downloaded from the web They can be professional radio shows –(eg. BBC, ABC, HBR) Or very unprofessional anything –Runescape phone call They are relatively inexpensive to produce
25 Podcasts iTunes podcast directory has 125,000 podcasts. The Podcast Network Stats 2007
27 Youtube During November 2007, 138 million people, or about three-quarters of Internet users in the United States, watched on average 3 hours and 15 minutes of online video, or 45 minutes more than they watched in January 2007. Those that have been lost by TV are likely to be found on YouTube, where 74 million people watched 39 videos each on average in November
29 Social networking Social networking is a loose term that describes all the ways people interact with each other on the web
30 Social networking Growth in $USD economy on Second Life
31 Social networking Growth in the use of ebay
Posted by Conan Doyle at 3:59 PM