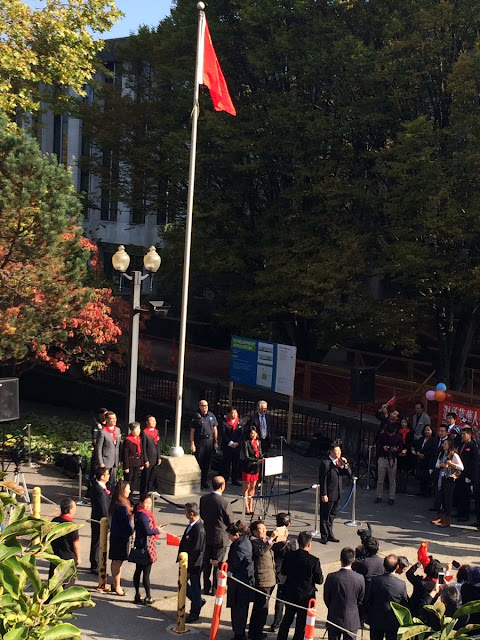 CBC is reporting that "The symbolism and meaning of a ceremony at Vancouver City Hall to mark the 67th anniversary of the founding of the People's Republic of China is raising concerns with some Chinese-Canadians. On Friday, about 300 Chinese government supporters turned out to watch acting Mayor Kerry Jang and Richmond East MP Joe Peschisolido don red scarves and raise the national flag of China in front of city hall. When news of the unpublicized event was posted online over the weekend, it sparked strong reaction from those in the Chinese-Canadian community who don't support the communist government."

The Vancouver Sun reported that Meena Wong, former mayoral candidate for COPE said “I was shocked, to have my city councillor in my city hall raising the flag wearing the symbol of loyalty to communism, I was dumbfounded.” Wong was a young child in Beijing during the Cultural Revolution and recalls the persecution of her parents and grandparents. For her and many others “it is a painful memory to see that red flag and scarves,” she said. 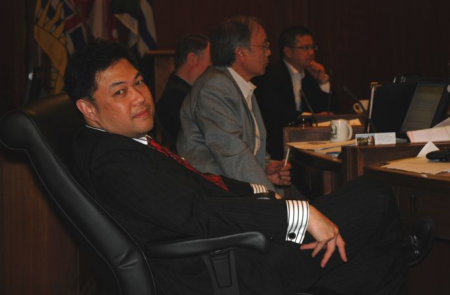 CKNW reported that Meena Wang delivered a petition to the Mayor’s office. Kerry Jang minimized the concerns claiming they were racist which is beyond absurd and totally offensive. The people complaining are Chinese Canadians who have endured atrocities under the Communist regime. Rebel Media is reporting that Thursday "Wong was joined by Louis Huang from the Alliance of the Guard of Canadian Values. His group is made up mostly of Chinese-Canadians who are fearful that Canadian values are being shoved aside in favour of closer and cozier relations with the government of China."

Vancouver City Hall is well aware of Communist China's secret holocaust with regards to organ harvesting from political prisoners. They went to court to force Falun Gong practitioners to take down protest signs outside the Chinese Consulate in Vancouver. Hoisting the Communist flag at Vancouver City hall knowing about China's illegal organ harvesting is endorsing that heinous practice and opposes everything that Canada has previously stood for.

A controversial Chinese flag-raising ceremony at Vancouver City Hall is being decried by some Chinese-Canadians as tacit support for the Communist regime.The Friday event, organized by a group called the Canadian Alliance of Chinese Associations to mark China’s National Day, is one of many flag ceremonies held at city hall.But the ceremony, which involved hoisting the Chinese flag in front of city hall while Vancouver Coun. Kerry Jang and Richmond East MP Joe Peschisolido stood by while wearing red scarves, has prompted criticism.“I was shocked,” said Meena Wong, former mayoral candidate for COPE. “To have my city councillor in my city hall raising the flag wearing the symbol of loyalty to communism, I was dumbfounded.”Wong was a young child in Beijing during the Cultural Revolution and recalls the persecution of her parents and grandparents. For her and many others “it is a painful memory to see that red flag and scarves,” she said.The Alliance of the Guard of Canadian Values, which has protested local celebrations of Communist leader Mao Zedong, has started an online petition calling for Jang’s resignation.Jang, a third-generation Chinese-Canadian, said he’s “agnostic” when it comes to Chinese politics.“Whether or not you agree with the Beijing government, us raising the flag follows federal protocol,” he said, adding the best way to affect change with China is to engage with the country.Jang, who only stood in for Deputy Mayor Heather Deal at the event because Deal was unable to attend, said he has been dealing with phone calls, emails and personal attacks Monday from people who see the ceremony as proof the city has sold out to the Chinese.“It’s rooted in ignorance and racism,” said Jang. “To them it doesn’t matter if it’s a Communist government in China, they’re just anti-Chinese.”The City of Vancouver said flag-raising ceremonies are requested by the community groups, which are responsible for organizing the event and sending out invitations.Vancouver has approved ceremonies for other countries, including Greece, Armenia, Slovenia, Colombia and the Philippines.Asked about criteria for which groups or countries get the nod, the city said that generally, it “will host a flag-raising ceremony to recognize the national day of any country that has official diplomatic relations with the Government of Canada.”

With the Falun Gong unable to peacefully protest in front of the Chinese consulate.  With the RCMP and CSIS stating that the Chinese has infiltrated into our political system.  The Confucius Institute (funded by the Communist Party of China) allowed to operate here.  Canada being used as a safe haven for capital and people of China.  Any attempt to raise these concerns automatically labelled as racism.  I guess they might as well make it official.  Vancouver has been bought/conquered by Mainland China.  Long live Chairman Mao!!!  Glory to the People's Liberation Army!!!! 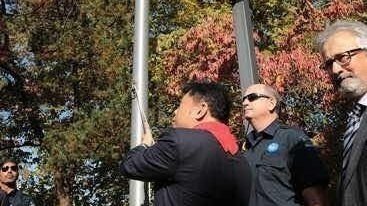 The Alliance of the Guard of Canadian Values started this petition to Vancouver Mayor and City Councillors
A 67 anniversary China National Day flag-raising ceremony was held in Vancouver City Hall at 11am on September 30, 2016. Kerry Jang, a Vancouver City Councillor and acting Mayor, hosted this gathering, raised a China national flag on the municipal flagpole wearing a red scarf. As a municipal councillor and acting Mayor, Kerry Jang raised a foreign country‘s national flag in front of the Vancouver City Hall, we think this is absolutely unacceptable. The red scarf he wore during that ceremony has a strong political implication, meaning the struggle for communism. This flag raising farce telling us that Councillor Kerry Jang lacks basic common sense as a politician in dealing with relationship with a foreign government. His act as a city councillor during this ceremony shames the whole city of Vancouver. We request councillor Kerry Jang to apologize for his misconduct and explain how this ceremony was organized; we ask for the resignation of Kerry Jang as a Vancouver City Councillor; we also request Vancouver City Mayor Gregor Robertson to explain how this ceremony happened and if he supported this event.