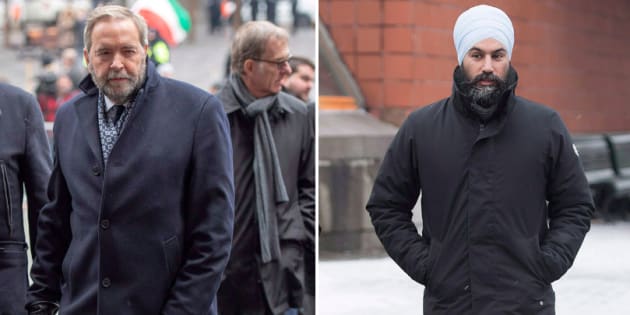 THE CANADIAN PRESS
Former NDP leader Tom Mulcair, left, has said it would be "extremely difficult" for his successor Jagmeet Singh to stay on as the party's leader should he lose an upcoming byelection.
As he gets closer to his electoral trial by fire, NDP Leader Jagmeet Singh finds himself facing heavy flak from his byelection rivals, unfavourable media coverage, and even criticism from his own predecessor.
On the day he officially opened his campaign office for the Burnaby South byelection, Singh appeared on CTV News' "Question Period," where he was invited to weigh in on the ongoing Canada-China spat.
Host Evan Solomon asked Singh what he thought about a recent editorial from Lu Shaye, China's ambassador in Ottawa, in which he accused Canada of exhibiting "Western egotism and white supremacy" in the case of two Canadians detained in the Asian country.
Michael Kovrig and Michael Spavor were arrested shortly after Canada detained Meng Wanzhou, a high-ranking executive at Chinese tech behemoth Huawei, at the request of the U.S. 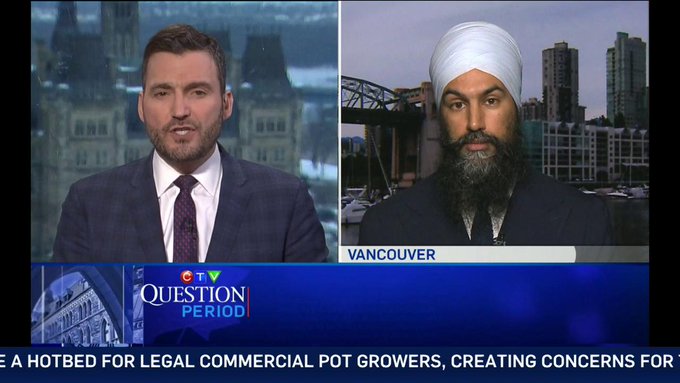 China's ambassador to Canada made headlines when he put out an editorial in the last week accusing Canada of white supremacy when it comes to the handling of Meng Whanzhou's case.

"Who accused who of white supremacy?" @theJagmeetSingh asked in response.#ctvpp #cdnpoli


"If you were the prime minister, what would you say to the Chinese right now?" Solomon asked.
"Sorry, who accused who of white supremacy?" Singh responded.
After Solomon got him up to speed, Singh said he didn't know if there was "any evidence" of the white supremacy accusation, and then went on to talk about "concerns" that the U.S. administration under President Donald Trump was using the detention of the two Canadians as political leverage in trade negotiations.

Solomon interrupted him to pivot back to the issue. "China has detained two Canadians. I just wonder if you've got your eye on the ball here," he said.
Singh then called Kovrig and Spavor's situation "deeply concerning" and said that Canada needs to make sure that there's "full due process" for anyone who is detained. He also called for their safe return and noted that he hopes their detention is not a "backlash" to Canada's arrest of Wanzhou.
Watch: Trudeau says China "acting arbitrarily" in case of Canadian sentenced to death

HuffPost Canada has reached out to the NDP for comment on Singh's CTV appearance.
Reactions to Singh's segment on social media weren't great, to put it lightly. Maclean's published a post on Monday headlined: "Someone get Jagmeet Singh a newspaper subscription."
And if that wasn't enough, former NDP leader Tom Mulcair also chimed in with his second jab at Singh in a week.
On a CTV panel, Mulcair said he was surprised by Singh's response to the question. 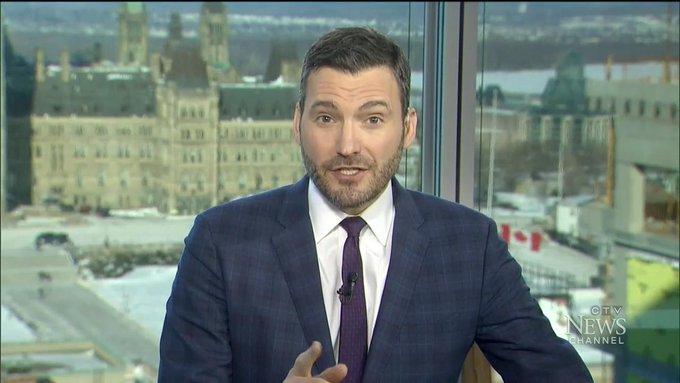 .@theJagmeetSingh was caught off guard on @ctvqp with a question about the Chinese ambassador accusing Canada of white supremacy.

"I was a little bit surprised to find out that it was news for Mr. Singh," said @ThomasMulcair.


"I was a little bit surprised to find out that it was news for Mr. Singh," Mulcair said.
But Singh maintains that he was aware of the Chinese ambassador's comments, according to StarMetro Vancouver.
"I didn't hear what [Solomon] had said ... and once given the question, I responded," Singh told the outlet at the opening of his Burnaby byelection office.
"Yes, I was aware ... I expressed that there is a deep concern on the part of Canada for people being detained."
Mulcair's comment comes just days after he also told CTV that it would be "extremely difficult" for Singh to stay on as NDP leader should he fail to secure a victory in the closely watched Burnaby battle.

Singh, who is up against Liberal candidate Karen Wang  and Tory candidate Jay Shin, has said he  and Tory candidate Jay Shin, has said he will "absolutely" stay on as leader should he lose.
Wang, a daycare operator who has lived in Burnaby for two decades, has been working to paint Singh as a parachute candidate with no ties to the community.
"He's not from our local community. He cannot represent you, represent us," she said of Singh late last month. "I believe we will have a good chance to win in Burnaby South as I believe right now I'm very familiar with our community. I'm one of the people here."

Shin, meanwhile, opted for a different tactic.
According to Burnaby Now, the Tory candidate, who is a business lawyer, sent out a press release blasting Singh for "keeping criminals out of jail." Singh is a former criminal defence lawyer.
Singh responded by saying that a legal defence is a fundamental component of Canada's justice system.
"Maybe (Shin) should go back to law school and double check what the basics of the criminal justice system are," Singh told the outlet.

Campaign wants Mulcair back as leader

Mulcair isn't the only former or current NDP member to fan the flames in Singh's bid for a seat in the House of Commons.
Dale Jackaman, an NDP member who ran for the party three times during the late Jack Layton's time as leader, has been leading a campaign called "Bring Back Tom Mulcair" since 2017. He said the group is comprised of former and current NDP members, as well as candidates.
The campaign, which is mostly active on Facebook, maintains that the Edmonton convention in 2016 that saw Mulcair turfed from the leadership was a "sham," Jackaman told HuffPost in an email. The group aims to get an apology from the party for Mulcair and eventually convince him to return to politics.
"To date, we've focused as much as possible ... [on] NDP membership with targeted Facebook ads from the Bring Back Tom Mulcair Campaign's Facebook page," Jackaman said, "and we will geo-target specific regional areas such as the Ottawa convention (centre) where the last federal NDP convention was held."
Jackaman said in a report submitted to the party that the system used to determine how many delegates are sent to the convention was "not adhered to," leading some areas like Alberta to be "overrepresented" at the meeting.

Mr. Singh, to be blunt, is just not in [Mulcair's] class.Dale Jackaman, founder of 'Bring Back Tom Mulcair' campaign

Jackaman said the group will cease campaigning during the byelection period out of courtesy to Singh, but will fire up the operation after the contest is over.
Jackaman, who now works as a private investigator, said he believes Singh won the NDP leadership race in 2017 fair and square, but that doesn't mean he'll support him. He also believes there is "no question" that his campaign has hurt Singh's chances.
"This campaign has split the party into two disparate camps and has significantly impacted both membership and fundraising numbers,"he said.
"Mr. Singh, to be blunt, is just not in (Mulcair's) class. We have no doubt that Mr. Singh will make a fine MP, but it will be some years before he will be able to run a federal political party, or the country."
Posted by Conan Doyle at 9:26 AM