Beijing has constructed additional infrastructure in the South China Sea, says Washington think tank. All this found to be illegal according to international law with a recent ruling but a belligerent China just ignores it. 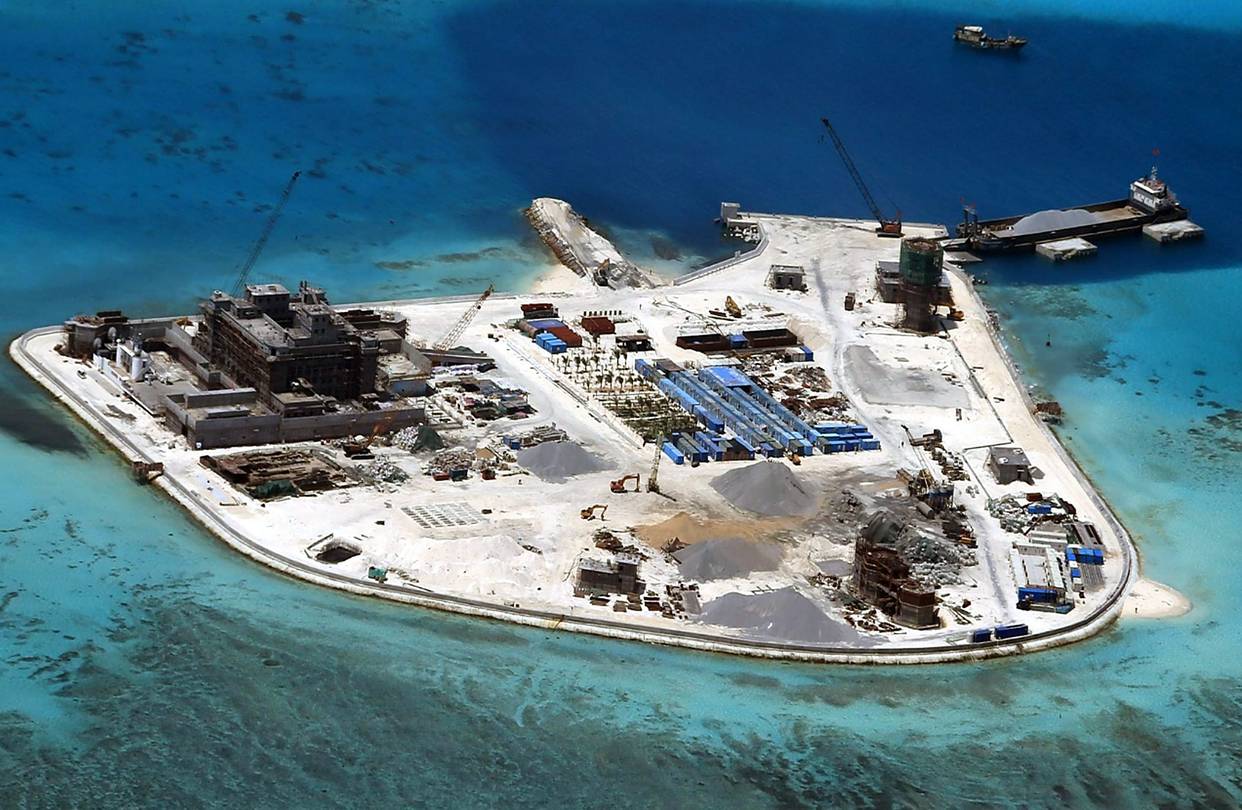 China has built more infrastructure on artificial islands in the disputed South China Sea in the past year, including underground tunnels and radar installations, even as it has sought to repair relations with other claimants, according to an analysis of fresh satellite images. 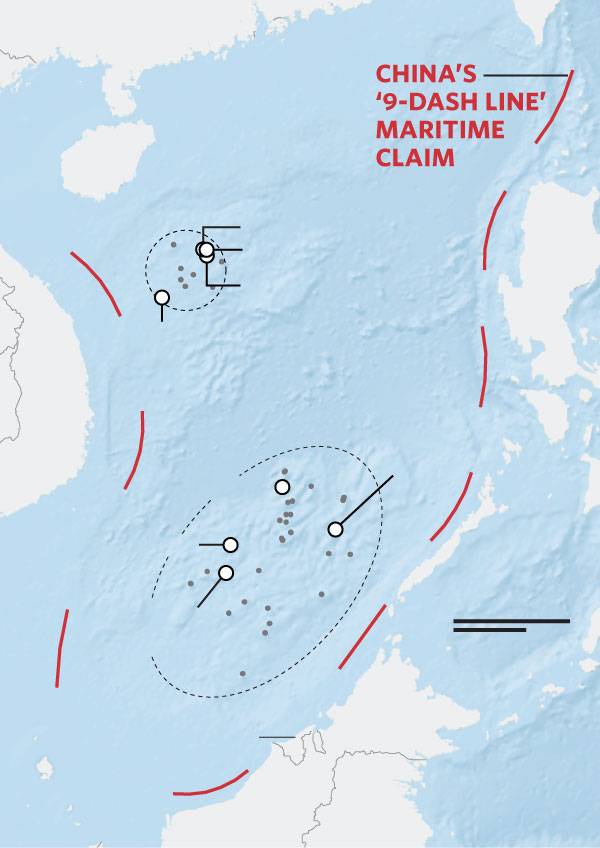 *China, Taiwan, Malaysia, Brunei, Philippines and Vietnam claim sovereignty over all or parts of these scattered islands and reefs.
Beijing’s construction of the seven islands in the Spratlys archipelago since 2014 has raised deep concern in the U.S. and much of Asia that China could use them to try to enforce its claims to almost all the South China Sea, one of the world’s busiest shipping routes.
China completed land reclamation in the Spratlys in early 2016, but continued such work to expand outposts in the Paracel Islands until mid-2017, according to the Asia Maritime Transparency Initiative, or AMTI, which released the images.
China also continued construction work designed to transform the three larger Spratly outposts into fully functional joint air and naval bases, and to upgrade at least three more Paracel outposts that could be used to bolster its control of the South China Sea, AMTI said.
The continued Chinese construction suggests that, even as regional tensions are focused on North Korea, Beijing remains determined to enhance its ability to defend its territorial claims, and to hamper U.S. military intervention in the South China Sea.
AMTI, which is part of the Center for Strategic and International Studies, a think tank in Washington, shared the images and its analysis exclusively with The Wall Street Journal. China’s foreign and defense ministries didn’t immediately respond to requests for comment. 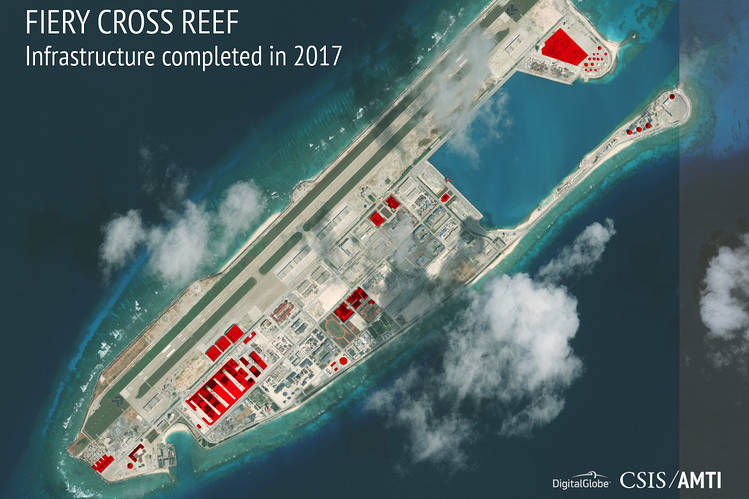 PHOTO: CSIS/AMTI/DIGITALGLOBE
Fiery Cross saw the most construction over 2017, with work on facilities covering 27 acres and including hangars by the airstrip, radar installations and fortified shelters for missile platforms, AMTI said.
Fiery Cross is one of the seven fortified islands China has built in the Spratlys, where Beijing’s claims overlap with those of Vietnam, Malaysia, Taiwan, Brunei and the Philippines, a U.S. treaty ally. 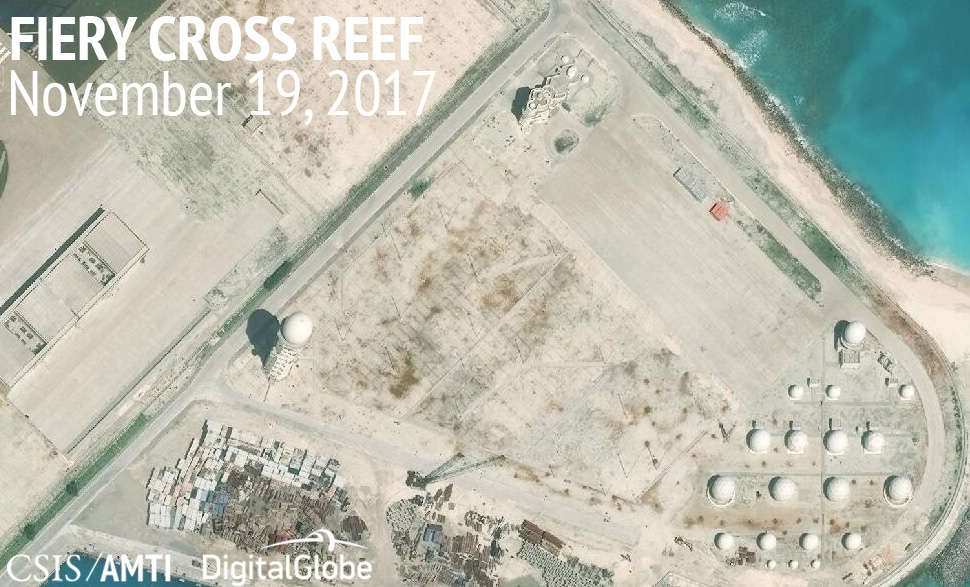 ILLUSTRATION: CSIS/AMTI/DIGITALGLOBE
In the last several months, China has also built what appears to be a high-frequency radar installation at the north end of Fiery Cross, according to AMTI. That consists of a field of upright poles, next to a large complex of communication or sensor equipment in white dome-shaped structures, it said.
While the range and precise purpose of such equipment can’t be established from such images, it will enhance China’s ability to monitor any activity by ships or aircraft in the surrounding area, says AMTI’s director Gregory Poling.
Earlier satellite images also showed a high-frequency radar installation on Cuarteron Reef, another of the Chinese-built islands in the Spratlys. High-frequency radar is often used to track ocean currents and ship movements, among other things. 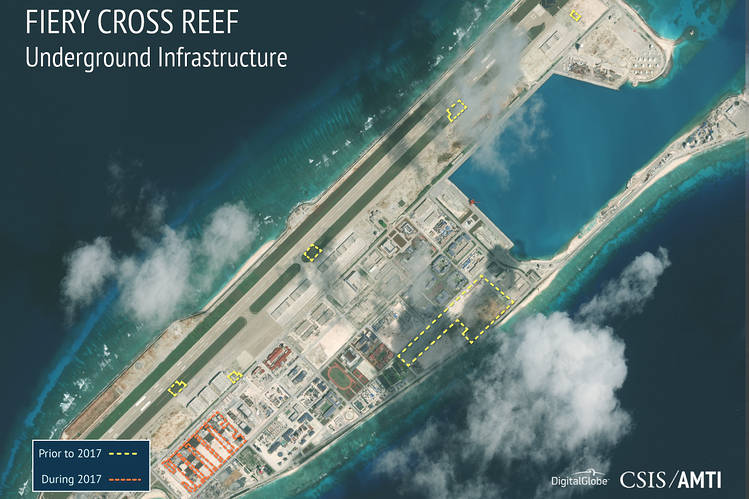 ILLUSTRATION: CSIS/AMTI/DIGITALGLOBE (3)
Large underground tunnels on Fiery Cross that were identified in earlier satellite images have now been completed and covered, according to AMTI. It says they are likely for storage of ammunition, and work on underground stores for water and fuel was completed earlier.
Fiery Cross is one of the three Chinese-built Spratlys outposts, along with Mischief Reef and Subi Reef, that have airstrips and big harbors and which Beijing appears to be turning into wholly operational air and naval bases, according to Mr. Poling.
China says its island construction is mainly for civilian ends and military facilities there are principally to protect freedom of navigation and overflight. In an attempt to repair ties with neighbors, it agreed in November to start talks on a long-awaited code of conduct for the South China Sea. 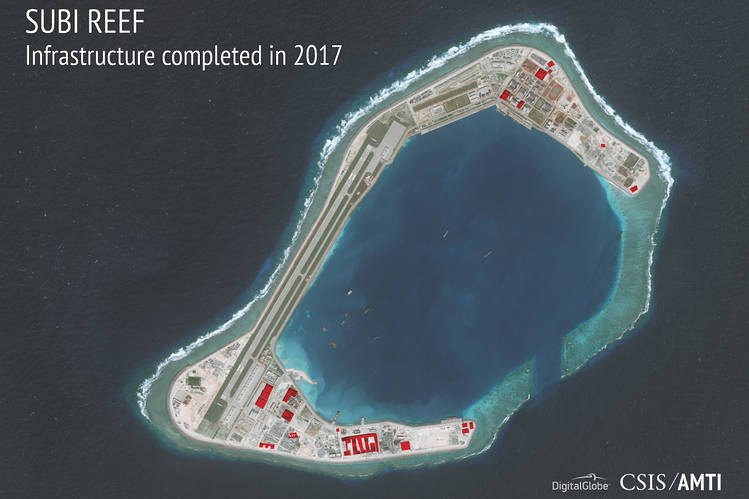 PHOTO: CSIS/AMTI/DIGITALGLOBE
There was also substantial construction on Subi Reef during 2017, with work on buildings covering about 24 acres, according to AMTI. It said this included buried storage facilities, hangars, missile shelters, and radar or communications facilities.
A U.S. naval destroyer sailed within 12 nautical miles of Subi Reef in October 2015, a month after Chinese President Xi Jinping pledged during a state visit to the U.S. not to “militarize” the Spratlys.
U.S. officials have since accused China of violating that pledge. Chinese officials say their upgrades don’t constitute militarization and have repeatedly warned Washington not to interfere in its territorial disputes.

ILLUSTRATION: CSIS/AMTI/DIGITALGLOBE (2)
Since midyear, China has built what looks like a second “elephant cage” antenna installation, left, on Subi Reef as well as a new array of apparent radar domes, right, AMTI said. The exact function of these “elephant cages” is unclear. The U.S. used similar facilities in the Cold War for signals intelligence—monitoring other countries’ communications.
“The radars and signals intelligence strengthen [China’s] ability to monitor everything the other claimants and outsiders like the U.S. do in the waters and airspace of the South China Sea, which is a necessary step to control it,” said Mr. Poling. 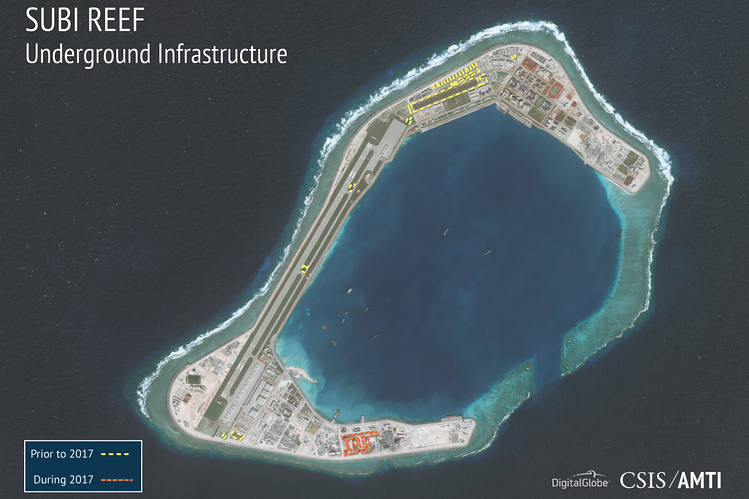 ILLUSTRATION: CSIS/AMTI/DIGITALGLOBE (3)
New storage tunnels at Subi, as at Fiery Cross and Mischief Reef, were completed and covered over in the past few months, according to AMTI.
“We can’t know for sure, but the construction of these new underground facilities, which are separated from each other and appear reinforced, suggests ammunition storage,” said Mr. Poling. 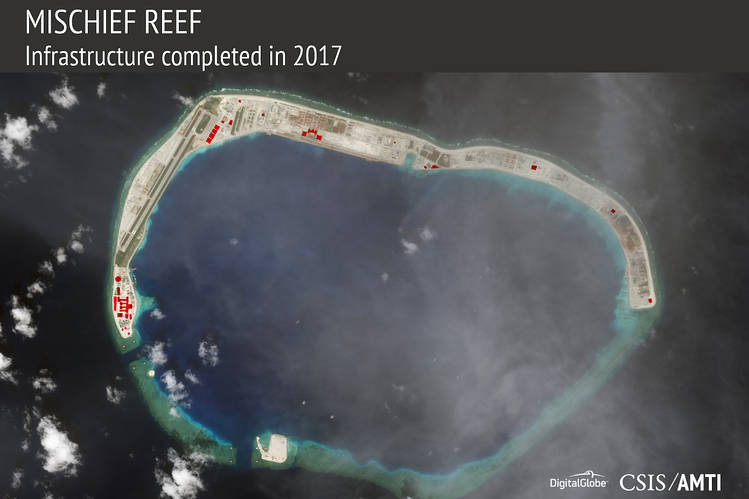 PHOTO: CSIS/AMTI/DIGITALGLOBE
Work on Mischief Reef this year was done on facilities covering 17 acres that also included underground ammunition storage, hangars, missile shelters and new radar and communications installations, AMTI said.
In August, a U.S. Navy destroyer conducted a freedom-of-navigation operation near Mischief Reef, accompanied by two U.S. reconnaissance aircraft, according to U.S. officials. Another U.S. destroyer had conducted a similar patrol around Mischief in May in the first such operation under the Trump administration. 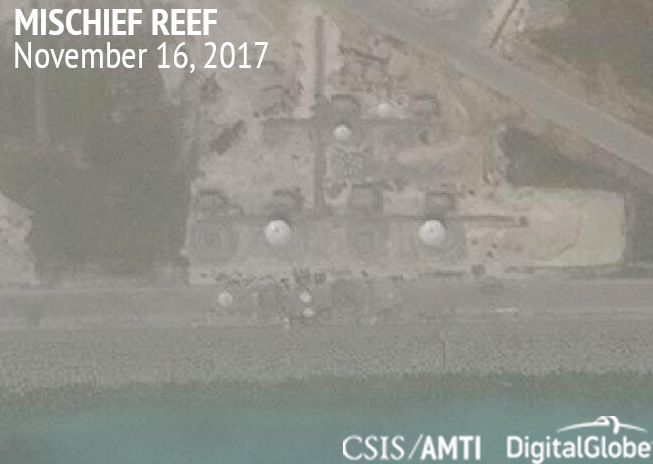 ILLUSTRATION: CSIS/AMTI/DIGITALGLOBE
China has started work on a new radar or communications installation on the north side of Mischief Reef, AMTI said. 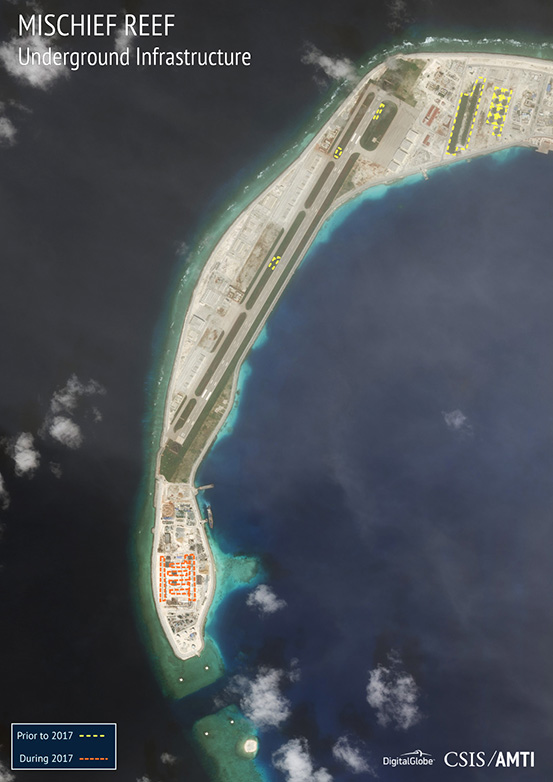 ILLUSTRATION: CSIS/AMTI/DIGITALGLOBE (3)
New storage tunnels on Mischief Reef were completed over the last several months and have been covered, AMTI said. 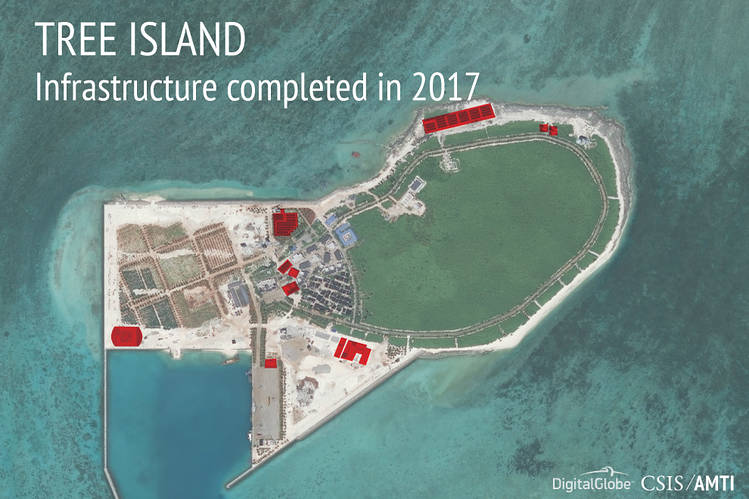 PHOTO: CSIS/AMTI/DIGITALGLOBE
Dredging and reclamation work at Tree Island in the Paracels continued as late as mid-2017, according to AMTI. In total, China built facilities covering about 1.7 acres and including a new helipad, solar installations and wind turbines, AMTI said.
The Paracels, which lie about 350 miles north of the Spratlys, are claimed by both China and Vietnam but have been controlled by Beijing since it seized them from Vietnamese forces in 1974. 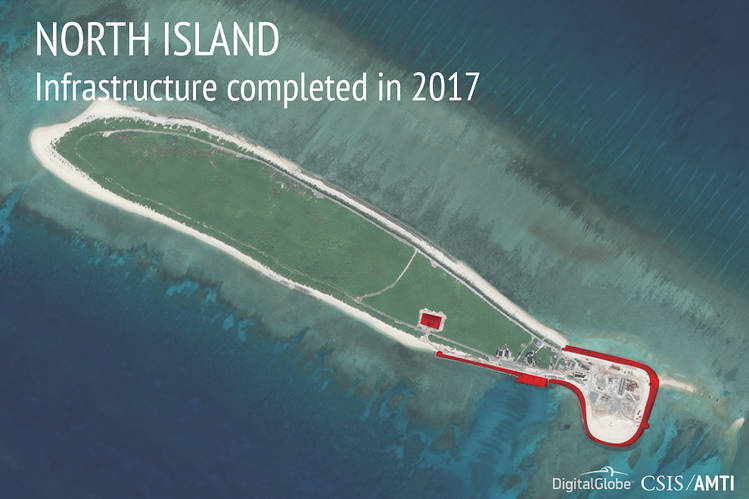 PHOTO: CSIS/AMTI/DIGITALGLOBE
China tried to connect North Island to neighboring Middle Island but gave up after the land bridge it created was washed out by a storm in October 2016, according to AMTI. It said China built a retaining wall around the remaining reclaimed land at the southern end of North Island earlier this year. 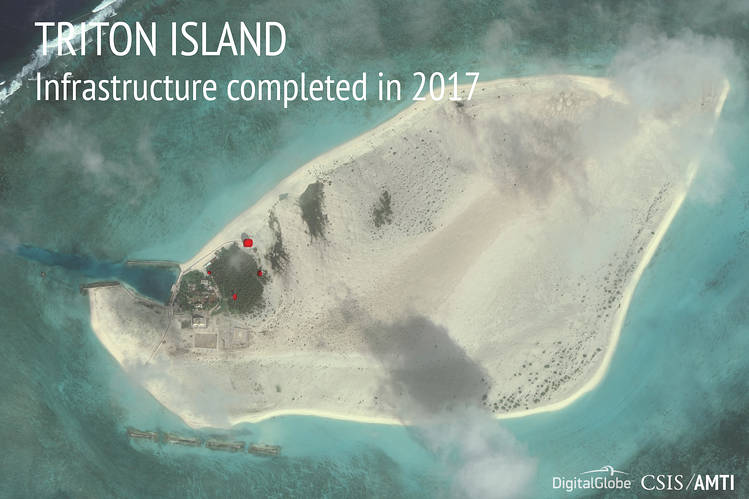 PHOTO: CSIS/AMTI/DIGITALGLOBE
Triton Island saw completion of buildings, including two large radar towers, according to AMTI. They are important as Triton is the outpost farthest southwest in the Paracels and waters around it have been the site of several recent minor clashes between China and Vietnam, as well as multiple U.S. freedom-of-navigation operations, AMTI said.
In July, a U.S. guided-missile destroyer conducted a patrol near Triton, coming to within 12 nautical miles of the island, according to U.S. officials. 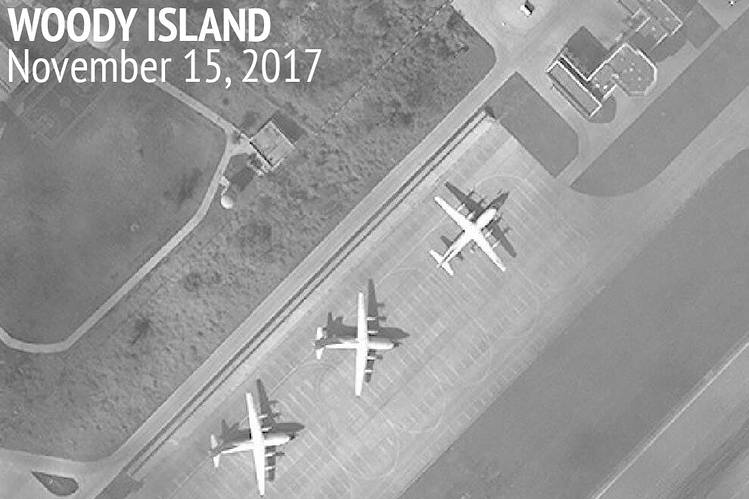 PHOTO: CSIS/AMTI/DIGITALGLOBE
Woody Island is the largest island in the Paracels and serves as China’s military and administrative headquarters in the South China Sea. Developments there have often been precursors for those at Fiery Cross, Subi and Mischief in the Spratlys, AMTI said.
It said there was no substantial new construction on Woody Island this year, but at the end of October the Chinese military released pictures confirming for the first time that J-11B fighter jets had been deployed there.
Satellite images from November also showed several large planes that appeared to be Y-8 transport aircraft, which can be capable of electronic intelligence gathering, according to AMTI. It said larger hangars by the Spratlys airstrips could also accommodate Y-8s, suggesting such aircraft might be deployed there later.
Posted by Conan Doyle at 4:10 PM